As soon as the EU has realized that there was no hope left for Ukraine to sign the association agreement with the European Union, a new goal appeared for the members of the Eastern Partnership forum that takes place in Vilnius, Lithuania. The Ukrainian issue remains the most important topic of the second day of the forum, but now they will try to find a way to sign the EU-Ukraine agreement at another summit in February-March 2014. 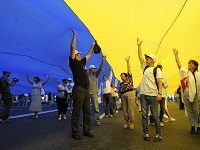 The signing ceremony, which was supposed to take place on Friday morning, did not take place; the official part of the summit ended without it. Prior to the official part, when asked why he was not going to sign the agreement, Yanukovych said: "Everything will be fine."

European leaders do not hide their disappointment. Earlier, the President of the EU chairing state, Lithuania, Dalia Grybauskaite, stated that "the road that the Ukrainian government has chosen leads to nowhere." Opening the plenary session on Friday, EU leaders congratulated Moldova, Georgia and Azerbaijan with the initiation of the association agreements, but no one said a word on Ukraine. The president of the EU Council indirectly hinted at the situation with Ukraine by saying that "the European Union respects the sovereignty of its neighbors and puts no pressure on them."

Georgia and Moldova signed the association agreement with the EU, so the Eastern Partnership Summit has partly achieved its goal, Associate Professor of the Department for European Integration of MGIMO, Alexander Tevdoy-Burmuli, told Pravda.Ru.

Lithuanian President Dalia Grybauskaite said that the results of the meeting in Vilnius were positive in any case. "The countries participating in "Eastern Partnership" program have made significant reforms," ​​she said. What kind of reforms are they?

"The main results of the summit are very contradictory, because, on the one hand, two countries signed the agreements - Georgia and Moldova. That is the summit achieved its goal, partly. On the other hand, the main intrigue of the summit was the situation with Ukraine, which at the last moment refused to sign the association agreement.

"In Ukraine, as we know, the situation escalated considerably. This question has suddenly become the touchstone of consolidation, or, vice versa, demarcation of the Ukrainian society. On the other hand, this problem actualized questions about the relations between the EU and Russia. In this situation, Russia and the EU found themselves on different sides of the barricades, and in this sense no result is also a result, as it makes clear to what extent the parties are willing to cooperate.

"It turned out that as for Ukraine, for example, the positions of the EU and Russia were polar opposed, which puts a limit on the possibilities of cooperation between Moscow and the EU on the whole. Therefore, this is also a result. Inter alia, whether Kiev signed the association agreement or not, Ukraine, along with other countries that have signed the agreement, indeed implemented a number of reforms that took Ukraine, like other countries, at least a little bit closer to certain legal and political norms of the EU. In this sense, this is a long process, the results of which may manifest in four or five years," Alexander Tevdoy-Burmuli said.

"If they put a condition to Georgia not to initiate criminal proceedings against Saakashvili, will they sign the contract in a year?"

"I do not think that they will put this condition. Saakashvili's fate is not of principle importance. The Georgians may or may not initiate a criminal case against him, but that does not mean much for the future of Georgia."

"Is Eastern Partnership going to live up to the next year?"

"I really have no answer to that. Azerbaijan is a very specific country. It enjoys the fact that it has abundant resources; the country runs very independent policies, both foreign and home ones. The home policy of Azerbaijan does not meet the criteria of the European Union. Signing any agreements in this sense means restrictions for Azerbaijan. I think that the Eastern Partnership will live until next year, at least," Alexander Tevdoy-Burmuli said.

"In general, the CIS countries develop, they adopt new laws. The European Union believes that they do so looking up to the EU and at the initiative of the EU. This is a weighty substitution of concepts. If we talk about the results of the summit, then surely it is a complete failure, no matter how much they would try to make happy faces.

"Azerbaijan, apparently believed that the European Union and the association of those around it are, first of all, the countries that have a deficiency of resources. Azerbaijan does not refer to these countries. Of course, the whole idea of the Eastern Partnership was launched from across the ocean, and implemented by so-called young members of the European Union, like Poland and Hungary. This idea has failed completely, because old members of the EU did not allocate any major financial means for this program other than those they call representative funds - the funds that are used, on top of everything else, to bribe political leaders."