'Gaddafi’s harem': Sex as a weapon of mass deception 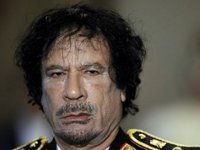 Sex sells, it's as simple as that. Modern society has become obsessed with sex. Unfortunately not because one considers it to be a source of great joy and a way to experience love and connectedness. On the contrary, people's obsession with sex merely sprouts from all the guilt and misguided 'values' surrounding the topic. The bigger the taboo, the bigger the obsession with it. For that reason, the vast majority of mankind can't do without their daily batch of stories linked to 'forbidden' sex in personal conversations, but even more in movies, soap series, tabloid stories et cetera.

Media moguls know this. The corporate financiers behind the media know this. But by far the most dangerous, the forces behind global war and destruction are fully aware that this is THE way to bend the public opinion - the public emotion - towards their evil agenda.

After the war on Iraq, NATO's war on Libya once again made it crystal clear that the wars of the 21st century have become nothing but straightforward propaganda wars. Whoever was not convinced yet by the already much used trump card of "another evil dictator being on the brink of eradicating a large part of his people", had to be won over by the topic that clearly appeals to the emotions of the majority: sex.

Global emotions ran high when mainstream media headlines in April 2011 started to claim that, according to UN diplomats, the forces of the Libyan Jamahiriya were being issued the impotency drug Viagra in order to engage in sexual violence and rape against those who supported the NATO-led rebels. From that moment in time, so-called Gaddafi supporters were inevitably also branded supporters of sexual crimes. No legitimacy for such people in the civilized world. Ergo, another free pass for NATO to proceed with its imperialist war on the once sovereign and prosperous country.

By now the outcome of this illegal war has become obvious for everyone.  NATO's 'free democratic Libya' has turned out to be a failed state, ruled by militias, mercenaries and traitors of the functioning Jamahiriya. But the remainders of Muammar Gaddafi's ideology as described in the Green Book are still there - moreover, the idea of a people's government only has been spreading ever since the outward destruction of the Libyan Jamahiriya in 2011.

The powers that create war - the desperate powers of the Western bankrupt countries - are well aware of the fact that the blood of the martyr Muammar Gaddafi has been the seed of a growing global call for a government based on the principles of the Jamahiriya. As a result of that, they saw no other choice than to disparage his  legacy as much as possible, only to rid his supporters of their credibility and to portray them as being as "inhuman and monstrous" as their symbolic leader. And again, how to do that better than via a topic that most people are vulnerable to: sex.

The propaganda snake that had to tarnish the reputation of Africa's hero once and for all, came in the form of a woman. A middle-aged woman named Annick Cojean, residing in one of the main orchestrators of the war against Libya, France, who works as a journalist of French mainstream media outlet Le Monde. Her book "Gaddafi's harem, The Story of a Young Woman and the Abuses of Power in Libya" is not only about the delicate topic of sex. The forces behind this ultimate piece of propaganda pulled out all the stops by making up a story of unbridled sexual violence and rape against underage girls by the most influential man of the entire country, who -'oh, irony'- went by the title of Guide of the Revolution. Or, quoting a mainstream review, "after reading her book, one gets the impression that Gaddafi's Libya was a grotesque and horrendous case of Viagra totalitarianism" and that Gaddafi "systematically used sex as a form of terrorism against his own people".

Cojean's book doesn't leave much to the imagination. It is built around the "confessions" of a 22-year-old woman, who at age fifteen became "one of Gaddafi's whores". The girl, Soraya (pseudonym), is said to be from Sirte, the hometown of Muammar Gaddafi. Had she been from either the city of Benghazi or the city of Misrata, which both have been cradles of terrorism and conspiracy against the Jamahiriya for decades, the effect of the description of "Gaddafi's crimes" probably would have been a little less efficient, the author must have considered.

According to the book, fifteen-year-old Soraya, in short, was "abducted from her mother's salon and driven out of the city and into the desert, to Gaddafi's tent". There she was "measured, weighed, washed and shaved", "a blood sample was taken by a Ukrainian nurse" and she was "made up and clothed in a dress with a deep décolleté over a tanga".

Soraya then was "led back to Gaddafi, who was sitting naked on his bed". When the girl "reacted with shock and refused to get into the bed", "Gaddafi, although angry, let her go". "But he shouted at Mabruka [earlier in the book described as 'the most notorious of Gaddafi's female thugs']: "This whore isn't doing what I want, make her understand and bring her back"."

Mabruka then "went to explain to Soraya that resisting was useless, and that Gaddafi would 'open' her". "The next time she was brought to Gaddafi, he raped her brutally. Over the next few days he whipped the girl, raped her again and again, even urinated on her. After a week, Soraya was taken to Tripoli to Gaddafi's headquarters at Bab al-Azizia. There she was given a dark, damp room in the cellar. Soraya was to spend seven years here as one of many of the dictator's slaves - at the whim of this mostly cocaine-fueled sex addict and his vicious band of female guards."

In an attempt to come across reliable, the author dressed up in the finest sheep's clothing. "Soraya poured out all that happened to her, and spoke so freely to me that at one point I wondered if what she was saying was true", Cojean stated in her book. "I believed her, she seemed to be telling the truth, all she had experienced just welled out of her - but I still had to follow up and make sure." Meanwhile, no conclusive evidence whatsoever has been provided as to whether "Soraya" is telling the truth or not. Also no word about the psychopaths of this world who are able to manipulate to perfection - most likely because the author is one of them herself, or at least her clients are and she merely is their useful idiot.

The snake-gone-wolf-in-sheep's-clothing did her homework. A considerable part of the book elaborates on a topic most readers probably are not even familiar with: the fact that the empowerment of women was central to the Libyan Al-Fateh Revolution.

The author doesn't fail to mention that Muammar Gaddafi supported women and believed in their abilities. For that reason, he highlighted his female bodyguards as a symbol of his belief in women's emancipation and their role in the defence of their country. Under Jamahiriya government women also made great strides in employment, with improved access to education and acceptance of female paid employment. During the last decade of King Idris' rule, females enrolled in primary education were only between 11-19%. However, in 1969, education was made a right. And by 1990, the figure stood at 48%. And last but not least, under Jamahiriya government child marriages were banned and the minimum legal age to marry placed at 18. Since 1973, Libyan women have had equal rights in obtaining a divorce, and no person can force a Libyan woman to marry any man.

The Leader of the Al-Fateh Revolution himself explained his great efforts for women by saying: "I promised my mother to improve the situation of women in Libya". His mother, a Bedouin tribeswoman born when Libya was an Italian colony, was unable to read or write.

This and more, including quotes from Gaddafi's Green Book about the liberation of women and their equal rights, has been written down by Cojean - only for the purpose that is characteristic of evil forces: to turn good into bad, and bad into good. So the Le Monde journalist leaves her less-informed and less-aware readers with the poisonous question of the snakebite that this book is: "How on earth can something that looks so good on the surface have such a rotten core?"

And the devil of globalism and imperialism laughs...

The real tragedy of this propaganda book that aims to turn Africa's hero into Africa's brutal sex-addicted mass rapist, is not only the fact that it broadly disparages Muammar Gaddafi's great achievements and ideology, as well as his humbleness as a Muslim and his simple personal life. It also - and be sure this is not a coincidence - massively draws away the attention from the extensive paedophile and sex abuse cases in Western governments, royal houses and churches, which currently nonetheless more and more come to light. So far no mainstream media outlet has been the voice of the numerous victims of those crimes, let alone allowing a book to be published on the sexual misconduct towards them by British Jimmy Savile, Dutch Joris Demmink and many many other high-ranking figures. Instead the proofless story of an anonymous, faceless "Libyan girl" gets the limelight - because this story exactly serves the imperialist agenda

In the end, Cojean's book only exposes and emphasizes the purpose of the evil forces. Because in the end it always is the good fruit that the mainstream media snakes are attracted to, while the rotten ones are left alone.

And Muammar Gaddafi has been such a good fruit.