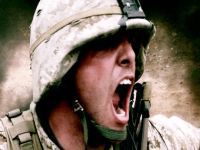 Last week a little more was learned as to the circumventions in Whitehall and Washington delaying the publication of the findings of Sir John Chilcot's marathon Inquiry in to the background of the Iraq invasion.

The UK's Chilcot Inquiry, was convened under then Prime Minister Gordon Brown, to establish the decisions taken by the UK government and military, pre and post invasion. It ran from 24th November 2009 until 2nd February 2011 and cost an estimated £7.5 million. The as yet unpublished Report is believed to run to 1000,000 words.

The stumbling block - more of an Israeli-style "separation barrier" in reality - has been the correspondence between Tony Blair and George W. Bush, prior to an invasion and occupation, which former UN Secretary General Kofi Annan finally told the BBC was: "illegal" and that: "painful lessons" had been learned. (BBC 16th September 2004.) "Lessons" clearly not learned by the current British government.

The communications, in Sir John Chilcot's words to former Cabinet Secretary Lord O'Donnell related to: "The question when and how the Prime Minister (Tony Blair) made commitments to the US about the UK's involvement in military action in Iraq, and subsequent decisions on the UK's continuing involvement, is central to its considerations."(Guardian 17th July 2013.)

Further: "Chilcot said the release of notes of the conversations between Blair and Bush would serve to 'illuminate Mr Blair's position at critical points' in the run up to war."

The Inquiry had also been seeking clarification from O'Donnell's successor Sir Jeremy Heywood regarding inclusion of references to: "the content of Mr Blair's notes to President Bush, and to the records of discussions between Mr Blair and Presidents Bush and Obama." The wall remains in place.

Sir Jeremy Heywood, now the country's most senior civil servant, was Tony Blair's Private Secretary during the period of the trans-Atlantic lies that led to the Iraq war and during the creation of the Blair regime's "dodgy dossiers."

Interestingly too: "O'Donnell had consulted Blair before saying the notes must remain secret." Effectively, one of the accused, in an action which has destroyed a country, lynched the President, murdered his sons and teenage nephew and caused the deaths of perhaps one and a half million people, decides what evidence can be presented before the Court. Chilcot, has seen the documents but seemingly needs the accused permission to publish them.

A stitch-up of which any "rogue" or "totalitarian" regime, would surely be proud.

Center to the dispute between the Inquiry, Cameron and his ennobled  gate keepers is material requested for inclusion in the final Report: "to reflect its analysis of discussions in Cabinet and Cabinet Committees and their significance."

The documents being denied to the Inquiry include twenty five pieces of correspondence sent by Tony Blair to George W. Bush and one hundred and thirty documents relating to conversations between these lead plotters of Iraq's destruction. Additionally: "dozens of records of Cabinet meetings."(i)

Ironically on 31st October 2006, David Cameron voted in favour of a motion brought by the Scottish National Party and Wales' Plaid Cymru ("The Party of Wales") calling for an Inquiry into the Blair government's conduct of the Gulf war.

On 15th June 2009, in a parliamentary debate, the terms of the Chilcot Inquiry were presented in detail, duly recorded in Hansard, the parliamentary records.(ii.)

Prime Minister Gordon Brown, Blair's successor stated: "In order that the committee is as objective and non-partisan as possible, the membership of the committee will consist entirely of non-partisan public figures acknowledged to be experts and leaders in their fields. There will be no representatives of political parties from either side of this House."

"The whole point of having an Inquiry is that it has to be able to make clear recommendations, to go wherever the evidence leads, to establish the full truth and to ensure that the right lessons are learned ... in a way that builds public confidence."

Cameron was particularly concerned about: "openness." How times change.

Cameron concluded with again a demand for "openness and transparency."

In response, Gordon Brown stated: " ... I cannot think of an Inquiry with a more comprehensive, wider or broader remit than the one that I have just announced. Far from being restricted, it will cover eight years, from 2001 to 2009. Far from being restricted, it will have access to any documents that are available, and that will include foreign documents that are available in British archives. (Emphasis mine.)

However, four years is a long time in politics and last week, as David Cameron traveled to Sri Lanka for the Commonwealth Heads of Government meeting, it transpired that the documents Sir John Chilcot had been pursuing and been denied for six months have been also blocked by: "officials in the White House and the US Department of State who have refused to sanction any declassification of critical pre-and post-war communications between George W. Bush and Tony Blair."

David Cameron is apparently also blocking evidence: " ... on Washington's orders, from being included in the report of an expensive and lengthy British Inquiry."(iii) Confirmation, were it ever needed, that Britain is the US 51st State, whose puppet Prime Ministers simply obey their Master's voice.

However, "shame" clearly not being a word in Cameron's lexicon, he landed in Sri Lanka (formerly Ceylon, a British Colony 1815-1948) as the above shoddy details broke, in full colonial mode.

Spectacular welcoming ceremonies barely over, he launched in to an entirely undiplomatic, public tirade, at this gathering of the  "Commonwealth family of nations" alleging that his host, President Mahinda Rajapaksa was guilty of war crimes during the civil war with the Tamil Tigers. Not disputed is, as any conflict, that terrible crimes were committed on both sides. But these are accusations from the man both covering up the genesis of massacres of genocidal magnitude - and who enjoined in the near destruction of Libya, the resultant lynching of the country's leader, the murder of his sons and small grand children and uncounted others in another decimation of a country who had threatened no other.

The pontification also from a Prime Minister backing funding for the cannibalistic orientated insurgents in Syria, the beheading, dismembering, looting, displacing, kidnapping, chemical weapons lobbying, child killing, infanticide-bent crazies, including those from his own country.

In Sri Lanka he demanded the country ensure: "credible, transparent and independent investigations into alleged war crimes" and said if this did not happen by the March deadline he arbitrarily imposed, he would press the UN Human Rights Council to hold an international inquiry. Further: "truth telling", he said, was essential. To cite hypocrisy of breathtaking proportions has become a redundant accusation, but words are failing.

In the event Cameron: " ... left Colombo having failed to secure any concessions from President Rajapaksa or persuade fellow leaders to criticise Sri Lanka's record in a communique", reported the Guardian (16th November.)

Ironically, in spite a tragic recent past, Sri Lanka is the only country in South Asia rated high on the Human Development Index. The UK and "allies" recent victims, Iraq, Libya, Afghanistan barely make it to the bottom.

David Cameron returned to Britain still having to grapple with how to evade delivering truth to the Chilcot Inquiry.

Hopefully he will read a letter from writer Lesley Docksey (Independent, 18th November 2013.)

"It was British taxpayers' money that funded the Chilcot Inquiry, and this taxpayer wants her money's worth.  All the British government papers concerning the sorry affair of an invasion of another country belong to this nation, not to the United States, not to Tony Blair, not to the current government.  Taxpayers aren't here to save the faces of politicians.

"Nor is it, in the words of the Cabinet Office, 'in the public's interest' that exchanges between the UK Prime Minister and the US President are kept secret' - sorry, 'privileged' - from those who are paying their wages.  The phrase 'in the public interest' only ever means the interests of the government of the day.

"Unless Sir John Chilcot and his team can publish a full and honest report, no lessons will be learnt by future governments.  But then, if those lessons were learnt, and we the public knew (as in fact we do) what they were, this country would find it difficult to ever invade anywhere ever again.

"So, Sir John, in the words of a former PM, the Duke of Wellington, 'Publish and be damned!' "

Oh, and as David Cameron was lecturing Sri Lanka on "transparency", the Conservatives were removing: ' a decade of speeches from their website and from the main internet library - including one in which David Cameron claimed that being able to search the web would democratise politics by making "more information available to more people." '.

"The party removed records of speeches and press releases from 2000 until May 2010. The effect will be to remove any speeches and articles during the Tories' modernisation period ..." (iv.) Comment again redundant.