The main intrigue of President Vladimir Putin's visit to Vietnam is signing of the agreement on the inclusion of the country in the free trade zone with the Customs Union. There are other very important aspects as well, including the advancement of Russian nuclear energy technologies to South-East Asia and the return of the Russian military presence in Cam Ranh Bay. 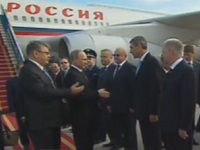 The idea of the Eurasian Union as a specific project was announced by the President of Russia in 2011 for the CIS area to strengthen the strategic influence in the western Atlantic Ocean and speed up the process of entering into the economic system of the Asia-Pacific region. Now the alliance is developing economically on the basis of the Customs Union, but in the future it could become a political and military force.

Before Putin's visit it was announced that during the visit the Customs Union (CU) and the Socialist Republic of Vietnam (SRV) may sign an agreement on the establishment of a free trade area (FTA). Vietnam's interest in the soonest accession to the CU of Russia, Belarus and Kazakhstan was stated by President Truong Tan Sang in July of last year. The main question is what the CU would bring. Is there an economic benefit or is it purely a geopolitical issue?

"Joining of the Customs Union to the FTA allows Vietnam to increase the volume of trade under the priority conditions," told Pravda.ru head of the Economics Department of the CIS Institute Aza Mihranyan. "This will not have a significant impact on the economy of the CU, because the volume of trade of Vietnam is focused on Russia, and Vietnam will be able to redirect it if it wants to. In terms of competition, there will be no problems because Vietnam does not sell the same products as the CU. This will be mainly raw materials that would successfully complement our market. The issue is agreed upon and discussed from an economic point of view. From a political point of view, the larger the trade volume, the more incentives for solidarity and unity of interest we will have. Since there are no large trade volumes so far, I would call this an agreeable extension, without any particular consequences," said the expert.

Vietnam's accession to the FTA will allow Russia to triple the trade with that country by 2020, up to $10 billion. "Vietnam is a rapidly growing economy with a large trade and labor markets. Economically in the long term it is a good partner. Its leadership is very favorable towards Russia, remembering the assistance provided by the Soviet Union during the war with the U.S. Geopolitical considerations are very important here as well, they are more important than the economy. Vietnam is one of the most important countries in the region, and Moscow's orientation solely on China in the long term may lead to a complete dependence on Beijing," said Vitaly Tretyakov, editor in chief of Political Class magazine.

In addition to cooperation within the Customs Union, Russia and Vietnam plan to form a strategic partnership in the energy and oil and gas sector. According to Vietnamese media, "Rosneft" and Petrovietnam following the visit have already signed papers on Russia purchasing shares of another unit on the continental shelf of Vietnam and joint work in the Pechora Sea.

Integration in the field of peaceful nuclear energy is associated with the energy block. Vietnam pays a great deal of attention to the development of this industry, and by 2030 wants to produce approximately six percent of its electricity at 13 nuclear power reactors of eight power stations, Vietweek magazine reported. "Among the ASEAN countries, it seems that Vietnam is the only country that has one of the most defined plans to develop nuclear energy, in particular, has a definite timeframe for the agreements with Russia,"  Kevin Punzalan, researcher at the College De La Salle in the Philippines told Vietweek.

President Putin in his article Russia -Vietnam: together towards the new frontiers of cooperation wrote that "Rosatom" will build the first nuclear power plant in Ninh Thuan province of Vietnam. The launch of its two units is planned for 2023 and 2024, respectively.

This is a very timely initiative because last month Vietnam and the United States signed an agreement on the participation of U.S. companies in the development of civil nuclear energy in Vietnam. Japan and South Korea are always striving to get into this market. Meanwhile, nuclear energy is a well-known Russian brand with billions in revenues. In this area the state corporation "Rosatom" wins the competition with major Western companies because it is the world's only exporter of the complete cycle of nuclear energy. By winning the tender in Vietnam, Russia will be able to automatically integrate into the economic and political relations with the country because it will train its technological elite and speak the same language with it.

On November 7, Russia handed over to Vietnam the first of six diesel-electric submarines of class 636 "Varshavyanka" (Kilo) with the cost of nearly $2 billion under the agreement signed in 2009. It will be based in the port of Cam Ranh Bay where the military-technical base for submarines and surface fleet maintenance is created. In addition, Vietnam has purchased two new patrol boats "Gepard -3.9." Their transfer is planned for 2016 and 2017. It virtually means the return of Russia's military presence in Vietnam. This will bring much-needed geopolitical balance of power to both Russia and Vietnam. Russia, as noted by Tretyakov, is diversifying its political ties in the region, and Vietnam has positioned itself as an independent player in the Asia-Pacific region amid growing Chinese-American rivalry.