On Sunday, two pieces of news emerged in the media a couple of hours apart. First, there was information about a telephone conversation between the Russian President and the King of Saudi Arabia. Then information emerged that the Syrian opposition agreed to participate in Geneva-2. This is another success of the Russian Federation that is becoming a major player in the Middle East. 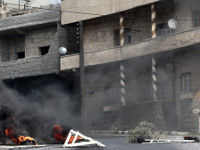 Historically, the Russian nation united all nations and peoples in what at different times was called the Russian Empire, the Soviet Union, and the Russian Federation, without assimilating them, but preserving and developing their characteristics and respecting other religions, beliefs, and traditions. For centuries, the Russian state was developing its diplomacy aimed first of all at respect for other nations, the desire to help them, without belittling anyone (sometimes to its own detriment). This assistance often caused rejection and accusations of imperial tendencies. The times have changed, and now those who were dissatisfied with the Soviet Union and Russia have a chance to compare the actions of Russia with those of the West.

It turned out that the West's efforts are primarily aimed at silencing, assimilation, destruction of unwanted religions, attitudes, and democracies. Russia is the only one able to find a compromise. For its Orthodox faith, unlike for Catholicism and Protestantism, peace remains the priority over aggression. This is particularly obvious in the Middle East, where the Russian diplomacy is achieving one success after another. Consciously or unconsciously, many politicians realize that if it had not been for Russia, the world would have long been led to the Third World War, and it would have resulted in a collapse of the civilization.

The change in the situation in the region became apparent last year, when Prime Minister Nouri al-Maliki visited Moscow twice and made not a single visit to Washington.

The country "liberated" by the Americans from Saddam Hussein made ​​a bet on cooperation with Russia, signing a package agreement on military-technical cooperation amounting to $4.3 billion dollars. The first batch of Mi-28NE and Mi-35 helicopters under this agreement will be delivered to Iraq in the coming days.

Maliki made ​​this turn not only because the Russian weapons in the local environment have proven to be better than the American ones, but because Russia does not sign oil contracts with Iraqi Kurdistan without asking Baghdad like the Americans do. Al-Maliki knows that the U.S. State Department is dreaming of dividing his country into smaller ones.

The second major victory for the Russian diplomacy was achieved before the historic agreements on Syria. It was done during a visit of the chief of military intelligence of Saudi Arabia, the chief mentor of the armed Syrian opposition, Prince Bandar in Russia in August of this year. According to the information in Russia Today and international media (Reuters, The Telegraph), citing their own sources), the Prince invited President Vladimir Putin to give Europe at the mercy of "Gazprom" and billions in contracts for purchase of weapons in exchange for the surrender of uncompromising Bashar al-Assad.

Bandar said that otherwise there would be terrorist attacks during the Olympic Games in Sochi. The Lebanese Al Motitor quoted him saying that the Chechen groups that threaten the Olympics are controlled by them, and they would not be sent to Syria without coordination with them. In response, Putin has allegedly threatened a retaliatory strike at the territory of the kingdom. In any event, Bandar has left with nothing. This became clear after Russia's breakthrough success on Syria, when the contract was made about the destruction of the Syrian chemical arsenal in exchange for the West abandoning the idea of a military invasion and the overthrow of President Assad.

This success was "aided" by President Barack Obama with his love to dotting all sorts of "red lines" and ambitions of a "great politician." However, we should thank him for dotting a "red line" for Russia, whose leadership became keenly aware that if Syria was handed over, Iran would be the next one in line, followed by Russia. Syrian agreements stopped the triumphant march of the Islamists in the Middle East. In addition, it was a blow to the trans-national government sponsored by the Jewish lobby that, fortunately, has chosen the wrong politician for the world domination represented by the U.S. president. Obama has let them down at the last minute, and did not have enough courage to order the beginning of the intervention.

The Jerusalem Post wrote that Russia was behind the deal with regard to Iran's nuclear ambitions. The newspaper wrote that the U.S. and the West have allowed themselves to be tempted by the Russian proposals, which resulted in Iran likely having enough nuclear capacity at the right time to make a leap for nuclear weapons. The paper is referring to a possible signing of an agreement in the near future with Iran to lift the sanctions in exchange for a temporary (!) suspension of uranium enrichment experiments. This is an assessment by Israel, but even Prime Minister Benjamin Netanyahu understands that the U.S. is unable to resolve the issue in his favor, neither in this nor in the Palestinian conflict. Who can help? Moscow is successfully working in this direction.

In February, Gazprom has won a key deal on the Israeli market of liquefied natural gas. Observers believe that the 20-year contract is only the first step in Russia's new energy game in the Middle East, wrote The Jerusalem Post. In addition, Netanyahu will arrive in Moscow on November 20 for talks with President Vladimir Putin. It appears that he wants to follow the path of Al- Maliki, Bandar, and leaders of other countries in the  Persian Gulf who take turns coming to Putin for a visit in search of closer diplomatic and military ties. For years, Russia has not played any role in the Palestinian-Israeli negotiations. Perhaps, Russia should start here as well, and the Russian diplomacy will manage to do it.

Egypt is also not that far away from the shift towards Russia. Last month, the administration of U.S. President Barack Obama angered the Egyptian military by its decision to reduce the amount of aid and supply of American arms to this country. During the upcoming visit of President Putin to Egypt, for the first time since 1970s, Russia will be able to strengthen its position in Egypt lost when Egyptian President Anwar Sadat banished the Soviet military advisers and stopped buying weapons from the Soviet Union.

The balance of power in the Middle East is changing. The western media is explaining it not by Russia's power, but the U.S. weakness. It seems that the strength of the U.S. is in its military power, while the strength of Russia is in its peacemaking potential. The Arabs are tired of fighting.

Russian is able to help in the financial aspect as well, and energy agreements with Israel are the best evidence of that. Middle East wants to cooperate with Russia, but is this what Russia wants? Yes, because calm in the Middle East means calm in the Caucasus. However, Russia must be careful and not repeat the mistakes of the Soviet Union that mindlessly helped everyone in the hope to outdo the Americans. It is important to obtain benefits, especially economic ones.