The West working on another coup - in Gambia

The United States is facing a financial crisis, but its government has not forgotten about the foreign policy. The tiny African nation of the Gambia has declared that the U.S. and the UK were planning to implement a coup in this rather poor country. Why does the West need control of the Gambia? 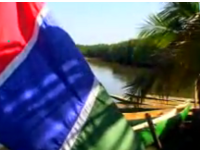 Gambian President Yahya Jammeh has accused the United States and Britain of financing the opposition and attempts to organize a coup in the country. The government statement read on air on Tuesday by many local television channels also said that the U.S. and Britain have been conducting an extensive smear campaign of false accusations and outrageous lies against the Gambia. The statement did not specify what the accusations were.

The UK authorities, in turn, were quick to refute the Gambian government. The official communique said that Britain was an old and faithful friend of the Gambia and the people of this country. It stated that both countries were interested in maintaining the relations based on trust, mutual respect and mutually beneficial cooperation.

The U.S. authorities have also denied the allegation of the Gambian authorities about the intention to arrange a coup in this tiny African country. Marie Harf, a spokesperson for the U.S. State Department denied the information on the financing of the opposition movement in the Gambia. She stated that the United States intended to continue a fruitful relationship with the authorities of the Gambia.
But, as the saying goes, there is no smoke without fire.

For 48 years the Gambia was part of the Commonwealth of Nations, but last week the government of the country stated on television its decision to withdraw from the organization. According to the statement, the main reason for the departure was the fact that the Gambia did not want to be part of a "neo-colonial organization." The authorities also indicated that they would never take part in organizations that exist only for the expansion of colonialism.

The Commonwealth of Nations was founded in 1931, but acquired its modern form after 1949, when the former British protectorates and colonies, Gambia in particular, became independent and began to form their own governments. The charter of the organization said that the Commonwealth should cooperate with each other in the common interests of their peoples and maintain mutual understanding and peace.

The Government of the Gambia did not explain the true causes of the country's decision to withdraw from the Commonwealth. Meanwhile, a Gambian Foreign Ministry official on condition of anonymity said that the decision was taken following the rejection by the Government of the Commonwealth initiative to establish a Commission against Corruption and Human Rights in Banjul (the capital of the country). The proposal to create a human rights body in the Gambia was made by the Commonwealth in 2012 after a visit to the country of Secretary General Kamalesh Sharma.

Every time the international organizations have stated that the elections were conducted with violations, and the local opposition refused to recognize the results. Jammeh responded that the critics "can go to hell," and he "would rule the Gambia for billion years if that's the will of Allah." He is now at his fourth presidential term.

The leader of the Gambia has established relationships with nearly all countries that the West believes to be insufficiently democratic. He had a good relationship with Muammar Gaddafi when the latter ruled Libya and official contacts with Venezuela, Iran and Cuba. At the same time he reconciled with Senegal. Yahya Jammeh did not get along with Europe and the United States. The West has accused him of violating human rights and freedoms.

Two years ago, on the eve of the presidential elections, Yahya Jammeh was angered by the fact that the UK supported the opposition. The Foreign Office, in turn, immediately accused the regime of the Gambia of human rights violations, in particular, of illegal arrests, closure of media outlets and discrimination of sexual minorities.

The oppositionist Bakary Dabo, former Vice President of the Gambia, said that President Yahya Jammeh has launched a "war against Western influence." He also said that the authorities often use "anti-Western" rhetoric.

Obviously, the West does not like the policy of Yahya Jammeh and has been trying to remove him. But is the mutual antipathy the only reason?

The Gambia is the smallest country in the continental Africa. It does not have many natural resources. Its main income comes from tourism and peanuts export. European travelers annually spend approximately 200 million dollars in the country, which accounts for nearly a fifth of GDP.

Why would the United States that is going through a budget crisis and extremely difficult economic situation spend money on financing a coup in this small African country? Perhaps the Gambia unexpectedly discovered oil that the U.S. loves and believes that all the oil should belong to it? If a country cannot defend itself, then the U.S. military comes, bringing blood, pain, misery, and, of course, the "democratic values." This happened in Iraq and Libya. Perhaps, the United States wants to repeat this scenario in the Gambia?

However, the Gambia is poor in minerals. It only has large reserves of quartz sand that can be used for glass production. There is no oil or gas in the country. The question arises, what could interest the Americans? Perhaps, they want to interfere for the sake of exercise and fun? This is not the case, and the reason behind the interference is the fact that the Gambia is rich in water resources.

These are large numbers for Africa. Unlike other countries of the continent, the Gambia is lucky- There is a river in the country that, in addition, is suitable for shipping. It turns out that in the 21st century wars are launched not only over territories, gold, and oil. There are already fights for water.

This is evidenced by the words of the head of the presidential administration who accused the U.S. government and the UK of an attempt to organize a military coup and supporting the opposition. He issued an ultimatum stating that the Gambia would never give up its natural resources, to "old vampire and the young locusts."

He is referring to the proposal of the U.S. declined by the Gambian authorities. Its essence could be summed up as use and total control of the territorial waters of the Gambia. Because the climate on our planet is rapidly changing, global supplies of clean water are quickly diminishing. Thus, wars over water may become commonplace.