It's seven o'clock in Remédios, historic town in the interior of Cuba, an exceptionally rainy morning in late Caribbean summer, which usually bears temperatures above 32 degrees. At the municipal hospital, Dr. Egley Turin Camilo Camacho and Dr. Gallo Ildez are ready to start another workday. People begin to arrive no hurry, because they know they will be met. Most of them perform only routine procedures, since the monitoring is done on a daily basis, through the Family Medical program that spans all parts of Cuba, from the remote rural areas to the capital, Havana. 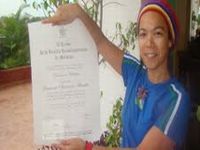 Public health in Cuba is literally a matter of state. The service is completely free for all levels, from primary to high complexity and the philosophy that prevails is health care, instead of treating the disease. All doctors have generalist training, with a humanist vision of the profession.

The training of doctors, Cuban or foreign, is free, despite all the economic difficulties of the country, the qualification is a necessity, not only to take care of the health of millions of Cubans, but also to export doctors. In Cuba, there are about 12 units of the Family Health Program, to serve a population of 11 million inhabitants. The average in the country is one doctor for every 183 inhabitants.

It is wrong to imagine that the main source of revenue is tourism in Cuba. Or sugar. Cigars and rum, traditional products, weigh little in the Cuban GDP. On top of the island's economy is the export of doctors, teachers and engineers. The exportation of doctors earns Cuba 5 billion dollars a year, representing 7 % of the GDP of the island. And twice what Cuba collects from all its exports.

Cuban doctors are working through agreements like that which was made ​​by Brazil in more than 60 countries, the developed Canada, France, Italy and Germany, the very poor nations of Africa and Asia , in addition to all the countries of Latin America. Dr. Egley, who now works in Remédios, worked three years in Somalia, North Africa, after graduating from the University of Havana.

"Medicine is not just a profession we have to make money. We are committed to taking care of people, either in Cuba or in underserved areas of other countries that do not have doctors, " said Dr. Egley, with the concurrence of Dr. Camilo, who served three years in Bolivia .

A vision of medicine

Humanist Amid the bustle of Old Havana , the heart of the Cuban capital, taken by tourists, Dr. Blanca Rodriguez , a specialist in vascular and diabetic patients, attends one of dozens of clinics across the city . It is she who, with the help of a nurse, evaluates and massages the feet of a patient with diabetes at an early stage . "We work closely with prevention, preventing the disease from worsening. It is a pleasure to take care of people's health," says Dr. Blanca, who has worked in Ecuador and Venezuela.

One example of the concern of the Government of Cuba to the qualification of health professionals is the Institute of Tropical Medicine Pedro Kouri (IPK). The IPK has prepared approximately 45,000 Cuban doctors and 5000 foreigners from 87 countries, specializing in tropical diseases and infectious diseases, as well as in terms of health services and epidemiological research.

The institute has six units at the University of Havana, Las Villas, Camaguey and Santiago de Cuba. In addition to the courses, the IPK offers Masters and Doctorates , through agreements with the Pan American Health Organization and World Health Organization. According to Dr. Nereyda Cantelar, deputy director of teaching "the IPK is authorized to grant the certificate recognized by UNESCO, because it is recognized as a center of international reference in Medicine" .

"The Cuban doctors who were sent to work in Brazil are still trained in diseases that affect the population of the poorest areas, such as dengue and ailments caused by poor living conditions and lack of prevention in health care," emphasizes Dr Nereyda .

A Brazilian doctor in Havana 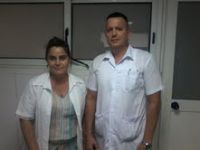 Cuba exports doctors not only to various parts of the planet, but also receives students from nearly fifty countries in their medical courses. This is the case of Brazilian Geisianne Oliveira de Almeida, Bahia de Feira de Santana. Daughter of a small businessman and a housewife, she just received a medical degree from the University of Camaguey.

"It took six years of university and since the beginning of the course I had contacts with patients. From the third year, we had time to integrate activities in hospitals and clinics," said Geisianne. Two years of the course are in experienced teams in the Family Health Program. "Teachers are keen to pass on all knowledge, with extra classes in complementary curricula such as geriatrics, oncology, nutrition, surgery and other areas, as we have a generalist," says the doctor. Students receive free all teaching materials and instruments of labor.

"My project is to get to Brazil and start work in deprived areas, which need doctors,. leave Cuba as a trained professional and as a person with a humanistic vision of the profession."

Geisianne Oliveira de Almeida makes a point of displaying the newly earned diploma . More than a piece of paper, it is the record of an appointment. "The practice of medicine is not business, is mainly taking care of people's health."

In time, the Cubans are unaware of the hostile and even rude manner of Geisianne's countrymen that the More Doctors program was treated with by a part of the media and medical institutions in Brazil. Believing they were welcomed with open arms, as they are working in areas of extreme poverty. It is best to think so.