The heart of the City of Motors Detroit stopped beating in July of 2013, when its government officially declared bankruptcy. Dilapidated city streets and its criminal history have become the talk of the town. Writer and automobile historian Konstantin Shlyahtinsky talked about the largest municipal bankruptcy in the U.S. history and its causes with Pravda.Ru. 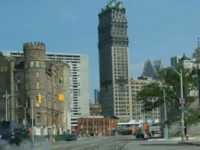 Konstantin, in order to understand the magnitude of the tragedy that happened in Detroit, perhaps, it would be helpful to talk about the history of its development and prosperity as an industrial center. How did it all begin?

"Late 19th - early 20th century in the United States was the time of motorization. Across the country, not only in Detroit, but also in other cities, car building factories were established. There were dozens, hundreds of them. Why Detroit? Because this is an industrial city, because it had experience with metal, there was energy, there were resources, there were people who understood something in the production of metal products. All this played into Detroit's hands. More auto companies emerged and were registered in Detroit than in any other city. Gradually Detroit transformed into a city with numerous car building companies. First of all, it was Ford Motor Company in Dearborn (a Detroit suburb), General Motors Company, Ford's main antagonist, Chrysler, Dodge, and a number of other companies. Taking advantage of the favorable market position, all these companies produced cars in large quantities. The demand for cars was increasing, and production had to grow. It could not grow without hands. Once there were jobs openings, people ready to work at car companies came to Detroit from across America.

The auto industry in the U.S. grew by leaps and bounds. By 1913, the North American United States, as it was then called, had over a million cars. At the time none of European countries was close to this number. The largest plants and headquarters of General Motors and Chrysler were located in Detroit and the surrounding area."

When was a turning point when the situation in Detroit began to deteriorate?

"As soon as the Great Depression broke out, in the early 1930s, all production, including automotive, was caught in a crisis situation. Many brands have shut down, and the largest ones like General Motors, Ford, and Chrysler have survived. Detroit was exposed to the same economic changes that have befallen the United States of America. Depression in the U.S. meant depression in the city. Growth in the U.S. meant that cars were selling like hot cakes, as it was after the Second World War, and the city was thriving. The peak of Detroit's prosperity came in the early 1950s. At that time, the city had the highest population, under two million people. All these people were employed not only in the automobile business but also in the related areas. These were the municipal services, the police, commerce, state and city agencies, water, gas, and electricity. Everything related to a modern city in our understanding gave jobs to Detroit.

After 1950, the population started fleeing the city. If we look at the data, gradually, by 1960, the population became increasingly smaller, and now, if I remember correctly, it is 700 thousand people. The infrastructure is completely destroyed. The only remaining large enterprises are Ford, General Motors and Chrysler."

What has caused the deterioration of the U.S. automotive industry? Was it the Increasing competition from Japan and Europe?

"A strong push in the direction of the deterioration of the city was in the early 1970s. In 1973 there was a fuel crisis. Large vehicles were no longer in demand. Respectively, not very large and not very stable in economic terms companies have disappeared. Only the "monsters" that were able to adjust to a new way were left standing - GM, Chrysler and Ford.

Since the U.S. auto industry in the early 21st century was in a serious crisis and General Motors and Chrysler were on the verge of bankruptcy, they had to use government aid. Naturally, if the town is tied primarily to the automotive industry and automotive companies are in crisis, the city will be in crisis, too. This is what happened to Detroit."

Has the U.S. government taken measures if not to save Detroit, but at least keep the American auto industry centralized there?

"The government support in the U.S. has never been particularly great because the country is based on market economy. Those who can survive in the market will survive. But one cannot live in the United States without a car, so these companies were supported. Maybe not directly, without handouts from the state, but through government programs. There were state orders, there was help with restructuring when necessary, reprieves from loans payment, and so on and so forth.

The structure of the city of Detroit when it was built was based on the principle first formulated by Henry Ford. He came to the conclusion that all that was needed for a Ford vehicle should be produced in one location. At his factories around Detroit he produced electricity, rubber, metal for the cars, and all the necessary accessories. At that time it worked fine, but as soon as the economic conditions have changed, these huge companies with a variety of plants that had no direct relationship to the assembly and sale of vehicles became a burden. They were gradually abandoned. Finally, there came the time when it became more profitable to produce a number of components in other places, mostly overseas. Even considering shipping it was still cheaper than producing them in the United States. This dealt another blow to the Detroit economy."

It affected the population of the city as well. Why has the city with a good geographical position become, so to speak, one large crime-ridden ghetto?

"Crime in the city is indeed very high. All the people who came there in the years of prosperity found themselves out of work. Many of them simply did not have funds to move elsewhere. The white, wealthiest population, moved to the suburbs, vacating entire neighborhoods in the downtown area. Now they are destroyed and looted. The city authorities could not solve this issue, no matter how hard they tried. It would be cheaper to demolish all these neighborhoods and build new ones than restoring old ones. The cost of restoring Detroit would be so great that even if someone decided to take this step it would simply not be feasible."

On July 19th of this year the City of Detroit has officially declared bankruptcy. What does this process involve in the United States?

"Bankruptcy of a municipality, in this case a city, is not uncommon in the U.S. When a city is threatened with bankruptcy, a decision is made by court. The legitimacy of declaring the city a bankrupt must be reviewed. In the case of Detroit there were doubts as to whether it was worth doing. A crisis manager was appointed who had to solve all these problems, and measures were taken. In any case, the action against the bankruptcy is always unpopular. They are associated with a decrease in some areas and an increase in others.

Detroit owes the most to its city and municipal employees, trade unions, police and fireman. The debt, if I'm not mistaken, is in the order of 18-20 billion dollars. That is quite comparable with the budget of a small country in Latin America or Africa."