Russia and Vietnam will build a repair and maintenance facility for ships built by the Soviet Union and Russia in Cam Ranh Bay, where one of the most important naval bases of the USSR abroad used to be located. By 2015, it is planned to build repair and logistics facilities in the deep-water port. Rebuilding of the military base is up in the air. 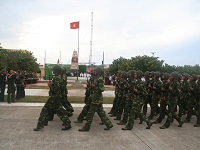 In recent years, Vietnam has been one of the most active buyers of Russian military equipment. They have been purchasing high-tech ships and aircraft. The center is expected to service ships of all classes and types, including medium repairs.

In 2009, during a visit to Moscow of Prime Minister Nguyen Tan Dung, a contract for the supply to Vietnam of six diesel-electric submarines was signed. The contract also provides for training of Vietnamese crews. For this purpose a training center is being set up in Cam Ranh.

Back then, there was hope that Russia will be able to regain its presence in this important part of the Asia-Pacific region.

Cam Ranh Bay is one of the most convenient and strategically important bays throughout the South Asian region. From there, one can control one of the key shipping routes linking the Indian and Pacific oceans. Luzon and the Malacca Straits are located nearby. The base at Cam Ranh Bay is getaway not only for the northern part of the Indian Ocean, but also the Gulf, East China and South China seas.

Cam Ranh Bay is considered one of the best deep-water harbors in the world. In 1979, the USSSR signed a 25 years lease with Vietnam for this bay. For Vietnam that with the help of the USSR had been consistently fighting off the Americans and the Chinese it was a logical decision. The Soviet Union also had to ensure the presence in the region, creating a counterweight to the U.S. naval bases in the Philippines.

At some point American troops were located in Cam Ranh Bay and built a port and an airport there. After the defeat in Vietnam, the Americans were forced to leave, and after the Vietnam-China war the Soviet military came to the bay. They upgraded the already established infrastructure and turned Cam Ranh Bay into a first-class naval base capable of receiving hundreds of ships

During the active restructuring of the base over ten thousand citizens of the USSR lived there, an entire Soviet colony thousands of miles away from their native country. However, in the late 1980 s and early 1990's events began taking place around the base that could be called a disguised fleeing. Although the term of the agreement was to expire only in early 21 century, Soviet equipment was withdrawn from the base early. The remaining one hundred workers could not maintain the infrastructure of the base with a total area of ​​hundreds of square kilometers at the appropriate level.

In 1995 an event unparalleled in the history of Soviet aviation took place. During landing on the airfield at Cam Ranh Bay three combat aircraft Su -27 from squadron "Russian Knights" have crashed. Hanoi has demanded an annual fee of $500 million for the lease of the base. The owners of the base rejected Russia's proposal to write off the lease amount from Vietnam's $10 billion debt to the USSR.

The Vietnamese even threatened to give the base to China or the U.S., but this, of course, was an empty threat. Finally, in early 2000s, Russia has officially left the base.

"The position of Vietnam is not to allow any foreign country to place military bases in Cam Ranh," said the Minister of National Defense of Vietnam, Army General Phung Quang Thanh. Instead, Vietnam intends to establish in Cam Ranh an international center for servicing vessels that will be operated independently.

In the days of "equitable" friendship between the USSR and Vietnam, the heyday of the base in Cam Ranh, the Vietnamese controlled the entry and exit from the port by shore batteries at the entrance to the bay and in the same way controlled the airspace with its air defense units. The base itself was demarcated on the ground by two perimeters. The outside perimeter was controlled by the Vietnamese who also worked on the base itself. It is clear that the Vietnamese would not allow an aggravation of the situation with the Soviet military at the time, but they have always emphasized their status of the owners.

Therefore, the creation of a large naval base in the region is hardly possible. Quite frankly, there is nothing to send there, as the program for re-armament of the Navy is regularly breached, and it would be strategically wrong to spread thin those insignificant resources that Russia still has.

Most likely, Hanoi will allow Moscow to create a maintenance and logistics point in Cam Ranh Bay, especially considering that this base will be used for repair and tests of diesel-electric submarines and frigates of project 11661E "Gepard -3.9" shipped to Vietnam. Now two more guard ships "Gepard -3.9" are being built at Zelenodol'sk Gorky plant for the Vietnamese Navy.

Nevertheless, the existence of this base allows the Russian Navy to significantly expand the sphere of action and plow southern sea continuously with its groups.

New ships are likely to appear soon, and Russia has no conflicting interests with the Vietnamese, unlike with some other Asian friends. The generation of the Vietnamese that remembers who burned Vietnamese villages and who protected the population is still alive. And while these people are alive, the relations between Russia and Vietnam will be normal. This is a great moral basis for the gradual resumption of the allied relations in a particular format and restoration of the Russian presence in this region of the world.