WASHINGTON / USA - The intelligence material gathered to prove the guilt of the Syrian government for the alleged use of chemical weapons was made ​​by members of the U.S. intelligence community to deceive President Barack Obama and convince him to take measure of punishment , according to Ray McGovern , a veteran of the CIA itself (Central Intelligence Agency), in an interview with the Russian news agency RT. 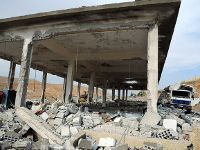 McGovern was one of the signatories of a letter of veteran intelligence employees delivered to Obama, the agent pointing out that Bashar al-Assad is not responsible for the alleged attack with chemical weapons , and that "the CIA director, John Brennan , is committing the same pre-Iraq fraud on members of Congress , the media and the public."

The veteran said that the problem is getting access to what they call the mainstream media. According to McGovern, the press is supporting the war and therefore did not want to hear that the evidence is very fragile. "They do not want to hear that people within the CIA, with great access to information, say there is no conclusive evidence that Assad ordered those chemical attacks. You do not assume those things, you need to prove them," he said .

The reason why the United States did not provide proof against the Syrian regime is because it could not be supported before a court, and not go through a thorough exam - this happened before Iraq, McGovern said, adding that the U.S. government needs to disclose the alleged intercept to prove the guilt of Assad to silence critics.

The former analyst said that Secretary of State John Kerry demonstrated to be under the influence of the prime minister of Israel, Benjamin Netanyahu - the only state that would benefit from a war in Syria, and that people with influence and White House advisers try to convince Obama to take a decision.

For McGovern , the change of posture from Washington about the possibility of an imminent attack in Syria was a conversation between Obama and the military, who said that military action could not be justified so soon, and that people and industries that support military intervention have no idea what war is.

Ray McGovern was a CIA analyst for 27 years and worked with seven presidents, responsible, during the 80s, for preparing daily morning reports with the material gathered by the agency to the head of government. McGovern was a fierce critic of the Iraq war led by President George W. Bush in 2003. More recently, he also criticized the government's actions in the episode involving the founder of WikiLeaks, Julian Assange, responsible for the leak of secret documents. He even said at the time that the only crime of Assange was "spreading the truth".

U.S. soldiers are using the social networking site Facebook to protest against military offensive that President Barack Obama intended to strike against Syria . With information from international news agencies.