How can Syra, Iran and Hezbollah respond to USA?

The situation around Syria changes daily. Recent news suggests that the U.S. military strike may be avoided. This is evidenced by a split among the allies, the position of Russia and China, international institutions, including the UN, NATO, BRICS, as well as the commitment of the alliance comprised of Iran, Syria, and Hezbollah to repel the aggressor. 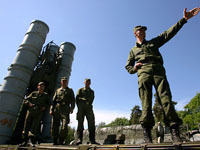 On Monday, U.S. Secretary of State John Kerry announced a condition for Bashar al-Assad that would prevent a military strike. Kerry stated in London at the joint press conference with his British counterpart William Hague that if within a week the Syrian leadership agrees hand over all of its chemical weapons under the control of the international community, the strike will be averted. This ultimatum is humiliating after the previous bellicose statements about unconditional military operation. It suggests that the American leadership faced a serious opposition to a military action. It appears that an agreement was reached with Russia, as Moscow immediately, without hesitation, called on Damascus to give chemical weapons under the international control with its subsequent destruction, and Bashar al-Assad agreed.

This was made possible thanks to the position of the Russian President, who said at the G-20 summit that Russia would help Syria in case of U.S. aggression. The U.S. stock market immediately collapsed, oil prices went up, and this is the main indicator of the significance of the event. In addition, on Saturday in Vilnius Kerry failed to obtain unified support of the European Union. Only France has agreed to provide its contingent, while other countries resorted to the verbal approval of a "strong response."

The silence of the Israeli media that earlier called on attacking the Syrian regime makes it clear that an equally important factor in the American indecision was the determination of the allies of Syria, Iran and the Lebanese group Hezbollah that announced the mobilization of tens of thousands of its fighters, a diplomatic source told the Lebanese newspaper The Daily Star on Friday. "Iran, Syria, and Hezbollah do not have a clear idea what the Americans have planned," the diplomat who wished to remain anonymous told the Lebanese Foreign Minister. "But these countries are also preparing for different scenarios."

The scale of the proposed military actions was first reduced from three-month to three days, and now it appears that it may not happen at all. So far the matter has not been resolved, and the American media wrote about precision strikes at the key position of the Syrian army, military airfields and strategic weapons depots, including the places of deployment of long-range missiles. This strike will be conducted most likely with Tomahawk missiles with five warships stationed in the Mediterranean.

How can the coalition forces of Syria, Iran, and Hezbollah respond? Edward Hunt of the famous publication IHS Jane's Defense Weekly pointed out anti-missile units "Yakhont" of which Assad has "at least twenty units." These weapons, according to an Israeli expert Tamir Eshel, chief editor of the Internet magazine Defense Update, pose a "serious threat" in the Mediterranean, because "Yakhont" missiles are capable of hitting targets at supersonic speed, flying at very low altitude, leaving the target very little time to react."

According to Hunt, Syria also has maritime vessels, helicopters and fighters of Soviet production for an attack on the American ships, as well as over 500 "Scud" missiles and other similar weapons "ground-to-ground," a dozen of Russian missiles SS- 21 ( "Tochka" ) and approximately 100 FROG-7 ( "Luna -M" - unmanaged tactical ballistic missiles). These missiles are not intended for use against targets such as warships of the United States, but they can strike at targets of the U.S. allies in the campaign - the American bases in Turkey, Jordan and Israel.

Syria does not have any intercontinental ballistic missiles capable of causing damage to the United States outside of the Middle East, the analyst said. But Iran has them, and according to the same diplomatic source of The Daily Star, it is preparing to launch strategic missiles." "The purpose of this step is to show the United States that Iran has serious intentions," the diplomat stressed.

In addition, Western analysts believe that the air defense system S-300 was supplied to Syria and is already assembled. Putin covertly threatened to sell it to Iran in the event of military intervention in Syria.

Despite the fact that the Syrian missile defense could not pre-empt the Israeli bombing of arms caches and allegedly a caravan with ballistic missiles that moved in the direction of Lebanon, it had some success in shooting down a Turkish intruder plane last summer. Western media reported that the aircraft was probably shot down by ZRPK "Pantsir-C1" made in Russia. This is another reason why the Americans do not want to use its air force in the beginning of the operation.

A South Ossetian military expert Zaur Alborov believes that a large number of drums drones can be used in military actions for the first time, the website segodnia.ru reported. The timely notification of the beginning of the air and missile attacks that may reduce its destructive force is very important. The Russian radar station in Armavir has convincingly proven its effectiveness by recognizing Israel's missile launch on September 3rd.

Iran can respond in two ways, Alborov said. It can do it through the hands of Hezbollah that would start massive rocket attacks on Israel and cross-border fighting, or do it directly. Iran's involvement in the war, as well as responses with missile attacks on Israel and Turkey could trigger a full-fledged regional war involving chemical and nuclear weapons by both parties and tragic consequences for the entire world.

There is no doubt that the time is now working for Assad. The international community is campaigning against the war and exposes provocations (which is greatly facilitated by the Internet). Syria is hiding everything it can, and Russia is actively working as a mediator.