Israel and Palestine - Peace in Exchange for Land

Israel and the Palestinians are to resume the negotiations suspended three years ago. It took U.S. Secretary of State John Kerry several months to convince the parties of the need to resume a peaceful dialogue. The negotiations are expected to last approximately nine months. Experts predict that the Palestinians will try to revive the formula of "peace in exchange for land." 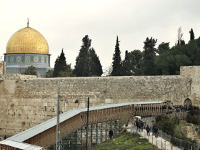 No significant decisions have been made yet. Israel and the Palestinians reached an agreement to continue negotiations for nine months. Most likely, the Palestinian side will be demanding serious territorial concessions by Israel. In fact, there will be an attempt to revive the formula "peace in exchange for land."

The Arab Peace Initiative was adopted in 2002 during the second intifada. Its author is the Abdullah bin Abdulaziz. On March 28, 2002, the League of Arab States (LAS) has officially adopted the text of the Saudi initiative. It can be summed up as an effort to achieve a comprehensive peace with Israel in exchange for the territories occupied by Israel in 1967. Of course, the Israeli government could not take such a peace offer from the Arab countries seriously. At the 2007 summit held in Riyadh, the Arab Peace Initiative was again approved by a majority of its members.

Another question is how it can be achieved under the current circumstances. Let's start with the fact that Israel has agreed to make territorial concessions to the Palestinians in the Gaza Strip. As part of Ariel Sharon's unilateral disengagement 25 Jewish settlements in the enclave with a population of over 8,000 people were evacuated. In 2007 the Hamas group seized control of the Gaza Strip. This event marked the beginning of a split in the Palestinian Authority, whose consequences could not be overcome to this day.

In addition, the extremists used the territories returned to the Palestinians for rocket attacks on Israeli towns. Over the years the IDF has held two major military operations in the Gaza Strip - "Cast Lead" and "Pillar of Cloud." Today, Israel has expressed its readiness to negotiate with the moderate Palestinian leadership of Fatah. At the same time it is becoming increasingly clearer that Hamas is not going to take any part in them.

Internal disagreements between Palestinians may lead to serious complications in the future. Gaza Strip groups are still only waiting, but the threat of a new escalation of violence in the region remains. Perhaps a new round of struggle for power in Gaza is not far off.

On July 31st, Minister in the Palestinian government Mahmoud Habbash issued a fatwa calling for the Gazans to get rid of the power of Hamas. "The duty of the Muslims is to liberate Palestine and Jerusalem. This obligation cannot be made without achieving unity. Thus, our duty is to unite," Mahmoud Habbash said in his fatwa. The fatwa also stated that the split could not be over without putting an end to Hamas control in the Gaza Strip. "Stopping power of Hamas in Gaza can only be done in two ways: either reconciliation or a revolt against Hamas. Thus, one of these options is mandatory. "

At the same time, the differences in the Israeli government regarding the resumption of the peace consultations in Washington are also growing stronger. Some ministers from the "Jewish Home" and "Likud Beiteinu" are categorically opposed to withdrawal from Judea and Samaria and the division of Jerusalem, considered one and indivisible capital of Israel. In addition, the party "Jewish Home" has already threatened to withdraw from the ruling coalition if the construction of settlements is resumed. According to the Deputy Foreign Minister of the country Zev Elkin, the chances of success in the peace talks are not that great.

"My personal opinion is this: I believe that over the last 20 years, the Palestinians have not made any concessions, not an inch, with regard to their original positions. All these 20 years, only Israel has been making concessions in the negotiations, and there is no reason to assume that this time they will act differently. Moreover, the statements of Mahmoud Abbas made a few days ago once again show that the Palestinian leadership is not going to meet the Israelis half way," said Elkin.
It is clear that both sides were reluctant to agree to resume the peace dialogue. Most observers still do not believe in the possibility of reaching a compromise on the territorial issue. The Palestinians continue to insist on a return to the 1967 borders, which is puzzling for Israel. Under these circumstances, negotiations can take a long time.