The Russian language under threat in Moldova

A group of young people in Moldova were fined for a banner in Russian. Earlier, graduates of Russian schools encountered obstacles when entering universities. It appears that under the guise of the "struggle against the Soviet occupation," the country started a new wave of persecution of the Russian language that  remains native for the representatives of the titular nation, including even the nationalist mayor of Chisinau.
A recent incident in Moldova may indicate the beginning of another wave of persecution of the Russian language. A group of young people were fined for using a banner inscribed in Russian during a protest.
On July 30th, law enforcement agencies fined Viktor Kalashnikov, head of the League of Russian youth in the city of Balti. Two weeks earlier, he organized a protest against the visit to Moldova of Romanian President Traian Basescu in the second largest settlement of the country. The police report states that two posters with the inscription in Russian violate the Administrative Code of the country.
In response, the Russian Youth League issued an emotional statement. "This case resembles the fight against the Russian language during the Romanian occupation of Moldova. The use of" fascist methods "in our supposedly civilized modern society makes us think whether Moldova is able to become a truly democratic country, or will it limit itself with the claim of the current government on the status?" says the statement. 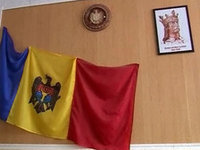 "The incident is associated with the rally against the arrival of Traian Basescu, who visited Moldova on July 17th. On this day in 1941, Ion Antonescu came to Balti to the opening of the concentration camps. Our grandparents survived the brutality of Romanian fascists, experienced the oppression of the Russian-speaking population, but nevertheless preserved the culture and language. Today, we have no right to ignore such actions by the authorities and law enforcement agencies, "the activists stated.
Note that this episode was not the only attempt by Moldovan authorities to "please" the Romanian guest who is tirelessly repeating that "Moldova is a Romanian state." In July it was reported that many universities of the country refused to accept the documents from graduates of Russian schools. Russian-speaking groups are being reduced, and Moldovan (or Romanian) ones do not accept Russian students. The graduates had to defend their right to study in court.

The fine for the Russian activist and barriers to the Russian-speaking students are the logical continuation of the initiatives of the parties in the ruling coalition. All three parties got together to fight against the Victory Day. The Liberal Party announced it was a "day of Soviet occupation", and the Liberal Democrats proposed to demolish the monuments to Soviet soldiers. Finally, the Democratic Party found the holiday to be "extremist."

In April of this year, an MP from the Liberal Party Ana Gutu proposed a bill that was supposed to completely remove the Russian language from public and political life. The deputy proposed to strip the Russian language off the status of the language of international communication. So far, the controversial document has not been adopted, but in practice its provisions are implemented with a zeal worthy of a better cause.
It goes without saying that implementation of Russophobian initiatives will not end well for Moldova. With this approach it is impossible to convince residents of predominantly Russian-speaking and Slavic Transnistria to recognize the power of Chisinau again. There is also Gagauz autonomy, whose predominantly Gagauz and Bulgarian population also prefer the Russian language to the state one. In these cases it may end in bloodshed.

In Bessarabia (the main part of Moldova) it is not that simple. Even official census shows that 16 percent of the population, and not only Slavic and Turkic, but also part of Moldovans, consider the Russian language their mother tongue. In the city of Beltsi where the activists were fined, the majority speaks Russian. A similar pattern is observed in a number of other areas in the north of Bessarabia adjacent to the Ukrainian border.

In Chisinau the picture is somewhat different. Moldovan (or Romanian) language is dominant there, but the Russian language is still heard frequently. Most owners of retail outlets, dealers, and repair shops duplicate their inscriptions in Russian. Restaurants of the city have Russian-language menus because customers have a need for them. The need mostly comes from local clients because there are not that many immigrants from Russia or Ukraine in the Moldovan capital.

"Fighters against Russian occupation influence" are fighting with Russian schools and universities, but the demand for the Russian language is significant. The number of those wishing to study in Russian is not declining, including among the Moldovans. Many residents of Chisinau of titular nation (even young ones) speak Russian without an accent. Mixed Moldovan-Russian or Moldavian-Ukrainian marriages are very common, even in rural areas. Children from these families use the Russian language no less frequently than the state one. Pure-bred Moldovans who constantly hear the Russian language since early childhood know it well.

Education in Russian is in great demand (even among Moldovans) because it is of better quality than the Moldavian (or Romanian). There is more literature on various branches of scientific knowledge in Russian than in Romanian. The Russian language is more wide-spread than Romanian. In Romania, the titular nation has the long-standing monolingual tradition. In Moldova, the situation is quite different.

Is this a consequence of the "Soviet occupation"?  Church-Slavic language remained the written language of the Orthodox Moldovans for centuries. Some eastern Slavs lived in Bessarabia from time immemorial, and Moldovans often mixed with Russians and Ukrainians since there were no religious differences between them. Even in the interwar Romania in 1918-1940 the Russian language continued to live in Chisinau and it was impossible to eradicate it.

In addition, promoters of Romanian themselves are not averse to using the Russian language. In the spring of this year, Moldova Chisinau City Hall meeting went viral. The mayor Dorin Chirtoaca, a nephew of pro-Romanian leader of the Liberal Party Mihai Ghimpu, cursed in Russian in front of the cameras.

The presence of the Russian language in Moldova is a historically established fact. A fight against it is a brazen and shameless violation of the rights of indigenous residents of the country. But European integrators do not care about human rights, and the fight with all the Russian and Soviet became clinical.