"Celtic Tiger" does not need the Senate

Among European countries Ireland was hit by the financial crisis the hardest. The country that was quite poor when it joined the European Union was able to become one of the most prosperous in a couple of decades. However, the economic setbacks of 2008 plunged Ireland into a group of outsiders of the world economy in the developed world yet again. The Irish have found quite an original way of getting out of the crisis. 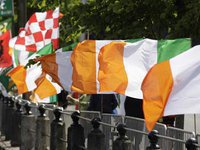 The Irish Parliament decided to hold a referendum in the country on the elimination of the Senate, the upper house of the Parliament. The majority of the members of the upper house, mainly from the ruling coalition, voted in favor of this decision. The MPs are convinced that this step will help Ireland to cut public spending by 20 million EUR in the most difficult times for the country. The decision was supported by 33 of the 60 senators.

The Minister of Labor and innovation of Ireland Richard Bruton, who heads the government's campaign to eliminate the Senate, said that all Irish businesses and families were forced to cut costs. He added that the political system was obliged to take this step, and the people had to make this decision. He believes that not every country can afford a bicameral parliament. He mentioned that some progressive countries like Sweden and Denmark have long proved that democracy can develop at a much lower cost in a unicameral parliament.

The referendum was earlier approved by the House of Representatives of the Irish Parliament. The decision will come into force after it is signed by the President. The referendum is tentatively planned for October 4.

Three years ago, Ireland virtually went bankrupt. The country was drowning in debt. The key problem was the collapse of the Irish banking sector. Experts initially estimated that it would take 85 billion euros to save it. Dublin procured 175 billion by selling state property and using the money from pension funds. The remaining 67.5 billion had to be borrowed.

Ireland received 22.5 billion from the EU countries, about 13 billion from the EFSF stabilization fund, and 20 billion from the IMF. In addition, the UK provided Ireland a bilateral loan of $3.8 billion, and Sweden and Denmark also offered help. Part of the debts of the Irish banks was taken by the government in order to prevent bankruptcy. The banks burdened by the "real estate bubble" mired in speculation. In order to save the banking sector, the government got into huge debts. For example, in 2010 the budget deficit amounted to as much as 32 percent of GDP. The unemployment rate reached 15 percent. Thousands of Irish people were forced to leave the country to seek employment in Australia, the U.S. or the UK.

In this difficult situation the government, led by Enda Kenny, began implementing a number of programs and reforms approved in advance by the IMF and the EU. "We never said it would be easy. It is simply impossible to overcome all the problems overnight," said Kenny. "We are in a very difficult position. I want people to understand that we are forced to make tough, unpopular decisions. We are working on behalf of the people of Ireland and trying to do everything as honestly as possible."

Professor Philip Lane, head of the Faculty of Economics of Trinity College in Dublin, confirmed that the "rescue" program has finally started to bear fruit. Over the last year the Irish economy has been showing a slight increase. "In order to return to pre-crisis level of GDP, we need another five years, since the recession of 2009 was quite deep," said Philip Lane.

The Irish Parliament made a decision to liquidate the former Anglo Irish Bank, whose financial collapse was the main cause of the debt crisis in Ireland. The bill was supported by 113 MPs, only 36 voted against it.

The authorities expect that by eliminating Anglo Irish Bank they will be able to reduce the burden on the banking sector. All assets of the financial institution will come under control of the National Asset Management Agency that deals with helping troubled banking institutions to get out of crises and buys mortgages of unreliable borrowers.

The Minister of Finance decided to remove the Board of Directors of the problem bank, and it is now managed by KPMG consulting group. The Minister said that this was done in order to maintain the bank's assets estimated at 12 billion euros. After rumors about the elimination of many financial institutions, many tried to withdraw their own funds.

Irish prosecutors opened a criminal case against the managers of the bank. They were accused of illegal facilitation of purchase of shares by the family of Irishman Sean Quinn (the wealthiest man in the country) in 2008. The Quinn family acquired the shares of the bank on loans received from the same bank. In late 2012 the businessman was convicted of concealing assets abroad.

In 2013 Ireland for the first time since the time when it had to request financial assistance from the EU placed ten-year bonds on the market, and managed to attract 5 billion euros. This is twice as much as originally planned. This success shows that Ireland is currently the only problem country in the EU that managed to regain the confidence of investors.

Since 2010, the most difficult year for the country, Ireland has developed and agreed with the European creditors measures allowing it to save 12 percent of GDP. In the summer of 2012 the government returned to the debt capital market and was able to attract a total of over 6.5 billion Euros. However, the maturity of the Irish government securities did not exceed five years.

In 2013, Ireland issued government bonds that the government agrees to repay in 2023. The participants included Goldman Sachs, Barclays, Danske Bank and some other banks. The volume of applications that have been submitted for the purchase of securities, according to them, amounted to 12 billion euros. As a result, they managed to raise € 5 billion (against three billion initially planned).

The country borrowed money at 4.15 percent per annum, which is lower than the yields of similar government bond in Spain and Italy. Analysts believe that the successful placement of Irish bonds will significantly increase the country's credit rating. Some economists expect that Ireland will restore access to world financial markets this year.

Recently, the Institute of Social and Economic Research (Dublin) published a report on the country's economic performance in the short term. In 2013, GDP growth is expected to be at 1.3 percent. The study authors noted positive aspects of the program adopted by the government. For example, the unemployment rate in the country is decreasing. Experts believe that this trend will continue in 2013 and 2014. The unemployment rate will drop from 14.9 to 14.6 per cent in 2013. In 2014, the unemployed will be at 14.3 percent.

The report highlighted positive "shifts" in the field of investment. Experts believe that the volume of investment in the country will increase by about 3.1 percent. Given the favorable prognosis, Joseph Durkan, associate professor of the Institute of Social and Economic Research, said that Ireland will be able to get out of its predicament later this year. The head of the Irish government agrees with him. According to Enda Kenny, the "Celtic Tiger" (as Ireland was previously called) will soon be ready to make another leap.