The Cuban Revolution remains young, President Raul Castro said on Friday in Havana, to close the main act of the 60 years of the assault on the Moncada Barracks, which was attended by several governments in Latin America and the Caribbean. 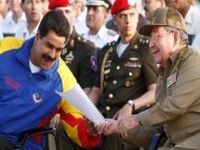 "This will remain the socialist revolution of the humble, by the humble and for the humble," said the representative in the same scenario in which six decades ago he participated in the historic event led by Fidel Castro.

Raul said that a process of gradual and orderly transfer to the new generations of the main responsibilities is underway on the island: "Over 70% of the Cuban population was born after the triumph of the Revolution," said the head of state.

They were youths who followed Fidel Castro on July 26, 1953, he said, and assured that the new generations of Cuban "continue defending the revolutionary ideals".

"It would seem a miracle that we are alive 60 years late, many of the participants in those events over which the thirst for revenge of the dictatorship broke loose," he said.

He called dreams the ideals that drove Fidel Castro and his companions, but recalled that five years, five months and five days later they managed to fulfill the command of the leader of the Revolution and demand and obtain the surrender of the Moncada Barracks.

He made a recount of the historic Cuban revolutionary process that, he emphasized, stood firm despite attempts to isolate the country and render it with the hunger blockade imposed by the United States.

Solidarity with Cuba expresses how much Latin America has changed since the assault on the Moncada barracks, said the official, who had words of thanks to the presidents of Venezuela, Bolivia, Nicaragua and Uruguay who accompanied him in the act.

Also for the heads of government of Dominica, St. Vincent and the Grenadines, Antigua and Barbuda, and Santa Lucia, who share an insular condition with Cuba and integrate the Bolivarian Alliance for the Peoples of Our America (ALBA).

We never lacked the support of people from all continents, particularly in this region, which united in its diversity and advances in its second independence, he proclaimed.

He acknowledged the support of various countries for the reconstruction of the damage in Santiago de Cuba by Hurricane Sandy in October last year. He did not expect the greatest quantity of support received, sent by President Hugo Chavez, he said.

He explained that government programs are underway that with the direct intervention of the population, show progress in the recovery of housing and infrastructure, particularly affected in this eastern area of ​​the island.
In his speech, about 40 minutes, Raúl Castro paid tribute "to the undefeated commander in chief of the Bolivarian revolution in Venezuela, disciple topping the national heroes of the independence of Latin America and the Caribbean."

He opined also that the Bolivarian process is driving firm with President Nicolas Maduro and he described as an uncontrollable march the transformations taking place in Bolivia and Ecuador.