What did Breivik want to say to the world?

Two years have passed since the dreadful massacre in Norway by an ultra-right activist Anders Breivik. The tragedy has highlighted the fact that the country's authorities have failed to solve the problem of immigrants, especially Muslims. Inaction of the authorities largely provoked the heinous crime whose victims were mostly Norwegians.

On July 22nd, 2011, 77 people fell victims of the terrorist attacks in Oslo and on the island of Utoya. Those killed by Breivik were mostly Norwegians. They belonged to the ruling center-left Labor Party tolerant towards nationals of other countries. The killer declared them national traitors pandering the Islamization of the country. 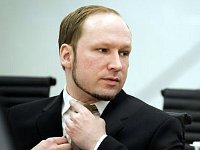 The most unpleasant fact for the Norwegian authorities is that many citizens of the kingdom, while finding Breivik's actions unacceptable, partially agree with some of his ideas. In the 2009 elections, the ultra-right Progress Party won the second place with 23 percent of the vote, demanding to ban Muslim immigration and restrict immigration altogether. Norwegian Muslims from the local Center for Combating Racism complained that after Breivik's crime the attitude towards them has only worsened.

The situation with immigrants in Norway is different because, historically, the kingdom was almost mono-ethnic. Up until the 1960s, it was not particularly wealthy, and the climate in the country is rough. Unlike the UK and France, it did not have any colonies, and therefore, there was no guilt complex associated with ruthless exploitation of many countries and nations in Asia, Africa or America.

In the last 45 years, Norway accrued wealth due to oil and gas production on its shelf. Other high-tech industries were developed in the country. The level of education of the local population has increased, and they were not particularly interested in low-skilled labor. As a result, the Norwegian authorities, following the example of other Western European countries, have resorted to imported labor. This is how first large groups of immigrants came into the country.

In addition, Norway turned out to be quite a compassionate country. According to the UN quota, it must annually receive 1.5 thousand refugees from war-torn countries, but in reality the number of those requesting asylum was several times larger. Every year, 20,000 people - immigrants from Afghanistan, Iraq, Somalia, Rwanda and other war-torn countries - await the authorities' decision on their future in special facilities for immigrants.

To date, immigrants make up over 14 percent of the population (or 711,000). The largest group is Poles with over 75,000 people, followed by Lithuanians with 25,000 people. They strive to stay in Norway as much as they can in order to join one of the most developed countries in the world in terms of social protection. For example, monthly child benefits payments in the country amount to $1,600.

There are plenty of issues with Poles and Lithuanians. Many of them returned to their homeland after working in Norway. Furthermore, they (generally) belong to the same culture and civilization. Immigrants from Asia and Africa are much worse integrated into the society. Among the refugees arriving in Norway 20 years ago, 55 percent still live on benefits. Almost half of them do not speak Norwegian.

At some point the Norwegian authorities allowed Asians and Africans into the country and implemented a program for reunification of families. However, the idea of ​​family in southern countries is different, and as a result, cousins ​​and second cousins, nephews, and uncles of the first wave of immigrants emerged in Norway. Some of them fit into the Norwegian society, but others did not want to work.

Norwegian official statistics says that the unemployment rate among immigrants from Asia and Africa exceeds nine percent, while among the indigenous Norwegians it is four times lower. Why would they work? Unemployment benefits amount to a thousand dollars a month, child benefits are even larger. They can live, breed, and the government will pay. As a result, indigenous Norwegian taxpayers have been maintaining a number of immigrant slackers for decades.

Muslim immigrants whose number amounts to approximately 180,000 (over three percent of the population) have even harder time integrating into the local community. 32,000 of them came from Pakistan, 28,000 - from Iraq and Somalia. 16-17 thousand people from Turkey, Iran and Bosnia reside in the country; there are also numerous immigrants from Afghanistan and Kosovo. A significant portion of immigrants from Russia (16,000) are natives of the North Caucasus.

The first mosque in Oslo was erected in 1974, and today there are several of them. Various Muslim organizations operate in the country. As of last year, approximately 40 percent of school children in the capital were children of Muslim families. In 58 of the 136 schools children of immigrants (mostly Muslims) already make up the majority of students. Breivik concluded that in ten years city of Oslo will be Muslim, and many agreed with him.

Part of Muslim immigrants successfully blended into Norwegian society. The most obvious example of this is the Minister of Culture, 30-year-old Pakistani Hadia Tajik. She earned a law degree, was a well-known journalist, and lives in a civil union with a Norwegian. However, many of her fellow country people behave quite differently.

Difficulties with the Muslims arise because of the fact that the Norwegian tradition is deeply foreign to them. Local people eat pork, which is not acceptable to the followers of Islam. The status of women in Norway is one of the highest in the world, and nearly half of the authorities are female. Residents of Pakistan or Somalia do not understand this. They also do not understand gay marriage, cartoons of the Prophet Mohammed and other idiosyncrasies of a democratic European society.

Taking advantage of the silence of the authorities, Muslim immigrants are trying to establish their own rules in Oslo. Unable to tolerate Muslims taking away pork sandwiches from Norwegian children and picking on blonde girls, many Norwegians left Groruddalen district in Oslo. A similar pattern was observed in several other areas of the city.

Just a month before Breivik's crime a tragedy occurred in the third largest city, Trondheim. A group of Muslim immigrants raped a Norwegian girl who then committed suicide. Later it turned out that the criminals committed two similar offences. Police say that the people from the Middle East and Africa commit the most rapes in the country.

The examples above are the elements of incompatibility of indigenous peoples and Muslim immigrants, as well as ordinary crime. But there are real "warriors of jihad" in Norway. For example, last year in Skien police detained an Islamist with a Norwegian passport who publicly threatened violence to Crown Prince Haakon and Prime Minister Jens Stoltenberg. "O Allah, destroy them, and let them be hurt!" the young Islamist wrote protesting against Norway's participation in the war in Afghanistan.

An Iraqi Kurd nicknamed Mullah Krekar has been living in Norway for over 20 years. "We came to change you. Look at the population growth in Europe where the number of Muslims is growing like a mosquito swarm. In 2050, 30 percent of the population in Europe will be Muslim," he said, also calling Osama bin Laden "a worthy man."

This "political refugee" and "victim of persecution by the regime of Saddam Hussein" was only imprisoned last year. Mullah Krekar was sentenced to five years in prison for promising to deal with the leader of the Conservative Party of Norway Erna Selberg who raised the issue of his expulsion. Krekar is in prison now, but over 20 years he acquired followers.

Another homegrown "jihad warrior" in 2010 threatened to arrange a new "9/11" in Norway if the local press does not stop printing cartoons of Prophet Mohammed. Local security officials have been ignoring the threat for a long time. The Islamist was sent to jail only after he publicly announced his intention to kill Prime Minister Stoltenberg.

Poor compatibility of Muslim immigrants and Norwegian values ​​has been evident for a long time. Many of them openly threatened Norway as a state. But the authorities did not take any action. As a result, Breivik came to solve the problem in his own way. Incidentally, the local security forces completely overlooked him.