Spain apologizes to Bolivia over Morales

The Spanish government presented on Monday to the Bolivian Foreign Ministry a note to express its apologies for the "incident" with the plane of President Evo Morales, which occurred two weeks ago. The president of Bolivia was banned from landing to refuel in Europe due to the suspicion that Edward Snowden, a former CIA agent, was also on the flight. 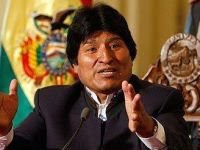 The document was presented by the Ambassador of Spain in La Paz, Ángel Vázquez, who deplored the conduct of his colleague in Vienna, Alberto Carnero, whom Morales accused of wanting to inspect his plane to see if he was travelling with Snowden, wanted by the United States for divulging confidential information.

"We regret this fact, we present our apologies for this proceeding, which was not appropriate and disturbed the president," creating a "difficult situation and unbecoming of a head of state," Vázquez told the press after handing the note to the Vice-Chancellor of Bolivia Juan Carlos Alurralde.

On his return from Russia to Bolivia, Morales had to stay more than 13 hours in Vienna because France and Portugal denied permission to land in or overfly their territories under the suspicion that Snowden was in the presidential plane. Snowden has been in the ​​transition area at Moscow's Sheremetevo Airport since last June 23.

Spain was included in the protest actions of the Bolivians, over the incident which outraged Morales. Vazquez insisted today that "Spain deeply regrets" the incident and said that his nation "wants with these administrations, that (the issue) can be taken as settled" and that relations with a "brother country" like Bolivia are the "best" .

"Spain and Bolivia have relationships that go beyond any incidence of any circumstances... and I'm sure the Bolivian authorities believe the same way," he added.

Vazquez said that Spain recognizes and respects "the principles of international law that protect the inviolability of Heads of State and the aircraft in which they travel" and expressed his confidence that situations such as those which Morales experienced will not be repeated in the future.

The blocking the plane Morales was travelling on was criticized by Latin American regional bodies such as Mercosur, Unasur (Union of South American Nations) and OAS (Organization of American States), which complained against the European countries involved and demanded explanations and apologies over the incident.