USA starts gold fever in Kyrgyzstan to keep their airbase?

Kyrgyzstan, a former Soviet Asian republic, continues to instant the agreement with the Canadian company Centerra Gold Inc should be terminated. The company conducts the development of the Kumtor mine. Analysts believe that tensions in the country have been rising due to the government's decision to denounce the U.S. airbase in Kyrgyzstan (in Bishkek airport). Therefore, there is a question of additional income to the state budget in the event Kyrgyzstan loses the financial support from the United States. 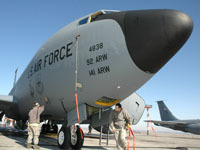 The airbase of international coalition forces was opened in Manas airport (Bishkek) in December 2001 to support international forces in Afghanistan. To date, the U.S. air base, later renamed as Transit Center is a major transport and logistics hub for the transportation of cargoes and troops of the antiterrorist coalition to Afghanistan. However, on July 11, 2014 Kyrgyzstan denounced the agreement between Washington and Bishkek from 2009 regarding both the transit center at Manas airport and any types of objects and property associated with it.

President of Kyrgyzstan Almazbek Atambayev said that his country was faithfully fulfilling its international obligations. According to him, the "agreement with the U.S. about the transit center would be in effect until it expires in the summer of 2014. After 2014, there will be no military man left in the Bishkek airport, the president added. Instead of the airbase, the president proposed to establish a major transport and logistics center.

The final document had been reviewed and approved by the parliament of Kyrgyzstan. The bill was approved by all factions and parliamentary committees. The bill was adopted due to the lack of "the need of further operation of the facility in connection with the forthcoming withdrawal of U.S. troops and their allies from Afghanistan."

It is worth noting that Bishkek has tried to close the U.S. airbase during 12 years of its existence. In particular, then-president Kurmanbek Bakiyev announced such an intention in 2005, but after the quick arrival of Pentagon Chief Donald Rumsfeld, it was decided to leave the base as it was to the normalization of the situation in Afghanistan. Four years later, the Kyrgyz parliament decided to denounce the agreement, and the president signed it. However, the base continued to operate as the Manas Transit Center.

Against the background of the most recent move to denounce the agreement, mass riots swept across the country. The riots, as it seems, had nothing to do with the U.S. air base. Kyrgyz people took to the streets demanding the contract with Canadian company Centerra Gold Inc. be revised.

In late May, a large group of residents of the Issyk-Kul region blocked the road to Kumtor gold mine. The people had been rallying outside the mine for six days. On May 30, they shut off electricity at the mine. Clashes with police began in several villages on the southern shore of Lake Issyk-Kul. To suppress the protesters, who were demanding the nationalization of the company and the improvement of material conditions, hundreds of armed policemen were deployed in the area. Kyrgyz President Almazbek Atambayev signed a decree imposing a state of emergency and curfew in the region. More than 90 people were detained; riot police used rubber bullets and tear gas to disperse the protesters.

Protests were then held in the south of Kyrgyzstan. About 300 people gathered for a meeting in the city of Jalal-Abad. In addition to general requirements, the protesters in Jalal-Abad demanded the release of imprisoned leaders of Ata-Jurt opposition party - Kamchybek Tashiyev, Sadyr Zhaparov and Talant Mamytov. The three men are serving sentences for attempted coup in October of 2012. Participants of the rally, wielding firebombs and stones, broke into the building of the regional administration. They pronounced Medet Usenov, the leader of El Unu opposition movement, the people's governor and urged the president and the prime minister to resign.

Despite the suppression of the rally, the riots were not over. On June 27th, in the village of Kyzyl-Suu, the Jeti-Oguz district of the Issyk-Kul region of Kyrgyzstan, a new meeting was conducted to denounce the gold mine agreement with Canada. About 500 local residents took part in the protests. The people demanded the Kyrgyz government should single-handedly terminate the agreement about the development of Kumtor gold deposit. Kyrgyz Deputy Prime Minister for Defense, Security and Border Affairs, Tokon Mamytov, and Plenipotentiary of the Government in the Issyk-Kul region, Emilbek Kaptagayev, arrived to conduct negotiations with the protesters.

The Kyrgyz authorities announced their intention to invest 120 million dollars in the Issyk-Kul region in the near future, as well as to build a new ring road around Lake Issyk-Kul. Such promising statement made many people go home, and the state of emergency was lifted. However, the tense situation in the country remains.

It should be noted that solving the issue about the gold mine contract is impossible before autumn. The agreement was signed in 2009, when President Bakiyev was in power. The government then exchanged two-thirds in the project to one-third of Centerra Gold's shares. Economy Minister Temir Sariev said that the agreement "was signed with rough violations without considering the interests of Kyrgyzstan."

The Canadian side puts forward a counter-proposal - to establish a joint venture. "Defining Kyrgyzstan's share in the future of Kumtor is the main and the most difficult question to deal with right now, - Sariev said. - Our consultants conduct all necessary calculations and analyze the assets of Centerra Gold and Kyrgyzstan. By September, the work will be done, and we will announce the government's position in the parliament."

In this regard, analysts note that profits from the Kumtor gld mine will be able to compensate for the loss of $60 million from the U.S. air base. "The question of the development of the gold mine is highly important as the country may lose the rental income from the American airbase," deputy Zairbek Zhooshbekov said.

It appears that the Americans are not going to bid farewell to their airbase. It is an open secret that provoking riots in Kyrgyzstan is easy. This, according to analysts, is exactly what has been happening in the country recently. Unstable situation in the Asian republic may affect the government's stance on the American airbase.