Kim Jong Un's North Korea stuck in the past forever?

The death of Kim Jong Il and the rise of his youngest son, Kim Jong Un, to power in North Korea served as a pretext for the outbreak of struggle for power in North Korea. Recently, the conflict between the successors of Kim Il Sung has flared up again. The reason for the crisis was the dismissal of Kim Ok, the widow of Kim Jong-Il, from the post of the Secretary of the Committee of Art of the Workers' Party of the Democratic People's Republic of Korea. 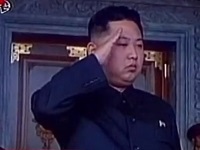 Reportedly, Kim Ok could become a victim of the so-called internal political cleansing conducted by the current head of the DPRK to consolidate his power.

The change of power

The date of December 17, 2011 became the day of mourning for the whole of North Korea, when thirteen years of reign of Kim Jong Il came to a natural end. The head of North Korea, the Great Leader, died during one of the trips on the territory of his country. According to the official version, the leader died from a heart attack.

For ordinary Koreans, it was the end of all - the state was left without the leader. In reality, the office of the head of North Korea was empty for a short period of time. The office was soon taken by Kim Jong Il's youngest son Kim Jong Un. The fact that he would lead the country was very easy to predict before the official appointment. The name of Kim Jong Un took the top spot on the list of the commission for the organization of the funeral of the old ruler of North Korea. Soon afterwards, the State Korean Central News Agency (KCNA) announced that Kim Jonh Un took office as the head of the country.

Rising to the throne

Needless to say that the change of power in North Korea was a bombshell for the whole world. Everybody wanted to know who Kim Jong Un was. However,  details of his biography and personality are very hard to find even now. For a long time, any sort of information about him remained a state secret. In addition, due to the lack of photos of Kim Jong Un in the press, nothing could be said about his appearance.

The currently available information is extremely inconsistent. One should also bear in mind the fact that any information about the biography of leaders in a country like North Korea are thoroughly rewritten and edited in accordance with ideological doctrines. Therefore, one should not trust official data completely in this case.

So, most likely, Kim Jong Un was born on January 8, 1982 in Pyongyang. According to news agencies, his mother was a Japanese-born unofficial wife of Kim Jong Il - Koh Yong-hee. The woman's main hobby was the art of ballet. Ko Yong-hee died in 2004 in Paris, from breast cancer. Kim Jong Un rarely saw his mother, and he, just like other children of the great leader, spent all his childhood abroad.

Kim Jong Un received education in Switzerland, Bern. In Switzerland, he studied with his brother Kim Jong Chol, and his sister Kim Jong-E. According to South Korean media, the children of the late leader of the DPRK could hardly ever go out not to fall under the "pernicious influence of capitalism."

Having finished his education, Kim Jong Un returned from Switzerland to North Korea, where he continued to study. Since 2002, he underwent individual training at the University of Kim Il Sung, as well as at the Military University in Pyongyang. Simultaneously, Kim Jong Un was rapidly moving up the career ladder. In April 2009, he was appointed a member of the National Defense Commission of North Korea.

Such a breathtaking political career of Kim Jong Un can explain a lot. For example, it becomes obvious that he was originally a favorite for Kim Jong Il. Kim Jong Un was preparing for the possibility to inherit the most important post in the country. In 2008, the then leader of North Korea suffered a stroke, and from that moment the question of succession of power became a lot more important than before.

On May 28, 2009, Kim Jong-Il officially appointed his son as his successor. The official notice of the appointment was sent to the offices of Pyongyang in other countries, as well as to the leadership of North Korea.

In September 2009, Kim Jong Un became a general. He was also introduced into the Central Committee of the Workers' Party of Korea (WPK). To crown it all, he was appointed the vice chairman of the Central Military Commission. Soon afterwards, Kim Jong Un became the commander of the armed forces of the DPRK. Since April 2012, he has been holding military and civil power in this closed country.

Thus, by the time of his father's death, when Kim Jong Un obtained all powers to govern the country, he was only 30 years old. Naturally, the appointment of a young and inexperienced leader to such an important post caused resentment among other potential heirs. In addition, although Kim Jong Il chose his youngest son as his successor, he did not have time to pass all necessary powers to govern the state to him.

All this, coupled with an unstable political situation, created fertile ground for a conflict to appear between the current leader of Korea, Kim Jong Un, and plenty of other relatives of the late leader of the DPRK. The list can, for example, include Kim Jong Un's sister Kim Kyong Hui (the only woman-general in the DPRK - Ed.), as well as her husband, Jang Song Taek, who, shortly before the death of the head of North Korea, also became members of the Politburo. Jang Song Taek posed the greatest danger: according to South Korean agency Yonhap, it was Jang Song Taek and her great political influence, who could seize power in the country.

In addition, Yonhap said, the military leadership plays the main role in the transfer of power in North Korea. The power of the leaders of North Korea primarily relies on the military administration. As we can see, the army is completely subordinated to the current leader, Kim Jong Un.

The head of North Korea now needs to control the situation and closely monitor all actions and moves of his rivals. According to Yonhap, the internal struggle for power was a greater threat to the country and personally to Kim Jong Un than any external factors. Realizing this, the new leader of North Korea has started the activities that could help him gain a foothold on the political scene of the country.

Then in April 2013, Kim Jong Un dismissed Prime Minister Choe Yong Rim, and appointed Pak Pong-ju in his place, who previously held the position. The reasons for that resignation were not specified, but the appointment of the ex-Prime Minister as the honorary Vice President of the Presidium of the Supreme People's Assembly of North Korea was an honorable exile.

After that, the political situation in North Korea settled down for a while. Not that long ago, the conflict continued to develop. Kim Ok (one of the unofficial wives of Kim Jong Il - ed.), who previously held the post of the Secretary of the Committee of Art Workers' Party of Korea, as well as her father, who also was an influential official, were deprived of their posts.

According to the media, the move was not accidental. Kim Jong Un has been distancing himself from the old guard, trying to get rid of the inner circle of Kim Jong Il, thereby strengthening his own power.

The current whereabouts of the 49-year-old Kim Ok are questionable. Some sources say that she may stay in Berlin or in Beijing for medical treatment.

Thus, having finally leveled the political landscape, the current head of the DPRK will be able to begin to deal with the problems of the country.

Analyzing the personality and first political moves of the current head of North Korea, it can be said that Kim Jong Un has the potential to conduct liberal reforms that would eventually help take North Korea out of the backward condition of the country that was forever stuck in the past. Some liberal steps have already been taken. Time will show what kind of country North Korea will become in the future.