Homosexual shadow of the Vatican

Rumors about the existence of homosexual lobby in the Vatican have been circulating for a long time. Analysts believe that a 300-page secret report of the Cardinals that, among other things, discussed sex and corruption among the high priests of the Roman Curia contributed to the abdication of Pope Benedict XVI. The presence of perverts at the Chair of St. Peter seems to be confirmed by the current Holy Father. What should we think about it in light of the reform of the Roman Catholic Church conceived by Francis? 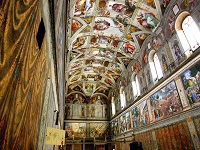 Pope Francis said in Spanish: "We are talking about the gay lobby, it is true, it does exist ... We need to see what we can do about it ..." (Se habla del "lobby gay", y es verdad, está ahí ... hay que ver qué podemos hacer ...). Officially, the Vatican has neither confirmed nor denied the statement of the head of the Catholic Church made at a private meeting with the representatives of the religious confederation of Latin America and the Caribbean region (Confederación Latinoamericana y Caribeña de Religiosos y Religiosas, CLAR). The first report about it appeared on the website of the Chilean Reflexion y Liberacion, and later CLAR delegates from Chile publicly apologized to the Pope for the publication of this article.

It could be seen as an untactful move. In fact, according to a fairly informed source, the Italian Primate is not saddened by the fact that his words have become public knowledge. In reality, the Vatican did not try to refute the statement. On the contrary, head of the Vatican Holly See Press Office Father Federico Lombardi only noted that he would not comment on the content of a private conversation, which can be viewed as a confirmation of what was said.

Marco Politi, a famous Italian journalist specializing in Vatican affairs, in an interview with radio "Voice of Russia" said that he believed that in many ways these words have been incorrectly interpreted. He added that there was no "gay lobby" in the Vatican, i.e., groups of people pushing their personal interests. However, such lobby, for example, may exist in a secular state. At the same time, the truth is that the Vatican does have a gay community that is far from righteous. There are also some gay men who use their ties with the Vatican "power groups" within the Curia. However, these power groups have no pronounced sexual orientation and simply represent part of the group fighting for power in the Curia.

In fact, by this statement Father Francis wanted to convey to the public his intention to begin "cleansing" that would aim at fighting against corruption, as well as suppression of inappropriate behavior on the part of individuals, both heterosexual and homosexual.

From a confidential source of the German magazine FOCUS reporters learned that if two priests in the highest rank, namely, the prefect of the Congregation for Doctrine of the Faith and Cardinal of the inner circle Pope John Paul II, had been accused of homosexuality, it would inevitably contribute to the resignation of the Pope. This is history.

Today, the Latino priest Francis made a statement that forced a timid professor of theology Benedict to firmly close his lips. This is the first indication that Francis wants to reform the Roman Curia and has encountered resistance. A few months ago, the Pope invited eight cardinals who should make proposals for the reorganization of the Curia and support him in the management of an updated universal Church, because he, by his own admission, is not "a good organizer."

In the past one hundred days since his election, Francis Pope never called himself the Great Pontiff (Pontifex Maximus), introducing himself only as a Bishop of Rome (Episcopus Romanus). He does not wear red papal shoes and a short red cape, and during sermons he does not sit on the throne but faces the congregation as a simple priest. And it is not only about the change of external attributes and calls to serve the poor asking nothing in return.

The Russian service of Radio Vatican on Thursday reported that Pope Francis established a special Pontifical Commission for the Institute for the Works of Religion (IOR), or, in other words, the Vatican bank. The saying "Letting gospel principles to penetrate into the economic and financial activities" means ruling out of any possibility of "laundering" mafia money through the bank or bribing the Italian politicians that took place in the 1990s and earlier.

Before reading the Angelus prayer at noon on June 23rd the Pope called on 80 thousand pilgrims and faithful who gathered in St. Peter to have the courage to go against the flow and not lose hope. FOCUS published a statement of Marco Politi about the events in the heart of the Roman Catholic Church who said that while many have not yet realized that Francis could start a revolution, there is an obvious icy wind blowing against the new Pope behind the high walls of the Vatican.