Georgia intends to get rid of President Saakashvili hastily

Political clouds are gathering over President Saakashvili's head once again. The majority in the Parliament of Georgia announced the beginning of the impeachment process. The next presidential election is scheduled for October of this year. Before Mikhail Saakashvili is sent off to retire, let's talk about the moments of his presidency that Georgia and the world will remember. 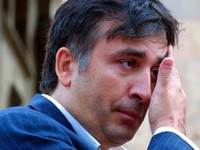 He also noted that it was required not in order to overthrow Saakashvili, but for the society to become fully aware of the disastrous consequences of the criminal regime of the country's leadership.

Under the current constitution the Georgian President is elected for a five-year term, which expired on January 20th of this year. But, according to the amendments to the electoral code made by the previous administration, the next presidential election is scheduled for October 2013. Thus, the actual term of President Saakashvili was extended by ten months. The "Unity" Coalition that includes over 70 non-governmental organizations and political parties is gathering signatures across the country, demanding withdrawal of Saakashvili. Over two months the coalition has collected over a million signatures.
Saakashvili's sensational confession of organizing a series of secret weapons stashes dealt a serious blow to his reputation. A system of caches filled with weapons, drugs, ammunition, torture chambers and torture videos was found in Samegrelo along with the list of the names of people undesirable for the "United National Movement".

First, Saakashvili took a brief pause, and then admitted that these caches were indeed created by the UNM on his personal orders, allegedly for "security purposes." Saakashvili did not deny the fact of torture in the country, but noted that this phenomenon was not widespread. "We all know that the current situation in the police is better than ever. Certainly, there are villains around. The most important thing is to identify and punish them in time," said the President

Different things can be said about anybody. You cannot please everyone, especially if you are a politician. Presidents are judged by their deeds and things they have done for their country. Therefore, it is important to understand who ruled Georgia for the last five years and what he ultimately achieved.

On the one hand we are told that Mikhail Saakashvili is a coward, a scoundrel and an American puppet. But on the other hand, the Georgian president works in a modest office and not in a castle comparable to the Byzantine palaces. Traffic cops in Georgia do not take bribes, and the police does not protect businesses but catches criminals. Car registration or property registration in Georgia takes only 10 minutes.

Transparency International, an international organization that measures the level of corruption, for several years has been classifying Georgia as one of the least corrupt countries in the world.

Over 70 reforms have been implemented in Georgia. In 2011, the level of confidence in the police in Georgia was 87 percent (third place after the church and the army). In comparison, in 2005 it was only five percent. In August of 2004, 15,000 police officers and road inspectors were dismissed. The number of road accidents did not increase, which suggests that the road police did not really work and did not improve the situation on the roads.

At first there was a great deal of discontent, because the dismissal of 15,000 employees could not go unnoticed for a small country with a population of about 4.5 million people. But as a result of a radical restructuring, the Georgian authorities were able to create a new police. It is the police reform that is considered a hallmark reform in Georgia. But this is not the only example. A reform of the state apparatus of Georgia was implemented, and cleansing of its ranks led to the dismissal of half of the employees of the public sector.

The progress in the tax reform is also noteworthy. In 2005, the number of taxes was reduced from 22 to six, with additional reduction of tax rates. The reduction of the tax burden had a favorable impact on tax collection. Over the four years of the reform the total amount of collected taxes increased nearly three-fold. The government was able to collect taxes properly and exist on these funds.

There was a reform of energy. Until 2004, Georgia lived in the dark and power outages have become commonplace. There were areas where electricity was not supplied in the daytime for months. As a result of the reform, energy facilities have been privatized.

The deregulation of the market made power disruptions a thing of the past. Georgia was able to not only provide electricity for itself, but also sell it to Europe.

Finally, there was the fight against corruption. General Inspectorate, a body that monitors the inadmissibility of corruption in different branches of the government, was created in each unit of state power, including the police and the Ministry of Finance. This service has been engaged in continuous provocations of officials and police. For example, a fake company would participate in a tender for government contracts, offering a bribe to the organizers. On the roads, cars whose drivers violated traffic rules on purpose and offered bribes to police were planted. If an officer took the money, he was forever dismissed from the public service, with the loss of all benefits, in particular, increased pension. Police and government officials in Georgia are well aware that their every step is watched.

Georgia has a policy of zero corruption tolerance, and even minor violations cause a very harsh punishment. Many police officers were put to jail for a few years for taking bribes under $50. The most important thing is that everyone is subject to this policy. Many high ranking state officials caught on bribery were jailed. Moreover, these were the people from the team of the reformers. Everyone is equal before the law.

But it is not all so rosy, and Georgia has its issues. The country has a high level of unemployment (over 16 percent). Georgia's economy is growing, but new jobs are not being created. There is a constant optimization of production, but few new jobs are created.

The country has a fairly low level of the average wage. Only state employees are well paid, and they value their jobs. During the reforms, salaries of the state apparatus have grown 15-40 times. In Georgia, the average salary is about $200, while the police inspector is paid $500 a month, patrol - $1,000, and detectives and department heads - up to $2,000. But even the state service has its issues. If the officials are confident that the "victim" is not familiar with the Georgian reality, they may still request a bribe.

The Georgian authorities have done everything to democratize the country. However, virtually no sector of the economy in Georgia is developing. The country does not produce anything. Retirement in Georgia is $60 a month. How can one live on this money?

The Georgian authorities, and, above all, Mikhail Saakashvili, have done a lot for their people, but were not able to eliminate all problems, especially in the economic sector. There have been a number of brilliant reforms, but people are still poor. This is what the world and Georgia will remember about Mikheil Saakashvili.