Japan lost the war to United States because of oil

Today everyone understands the role of oil in the society. Oil was the main goal, and often, the main weapon in the wars of the twentieth century, especially during the Second World War. 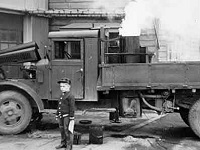 It all started with the exacerbation of the relations between Japan and the United States, when President Roosevelt imposed an embargo on the supply of crude oil to Japan. This was a big blow to Japan, since in 1939-1940 the country was producing only some 2.7 million barrels of oil a year in its own fields. About a million barrels of oil were coming from the occupied Korea and Manchuria, the Soviet Union sold the same amount from the island of Sakhalin, and there was some mining in Taiwan. The production of synthetic fuels under the U.S. patent was negligible, and what was Japan to do if 80 percent of its oil was imported from Mexico and the U.S.?

U.S. analysts after the embargo decided that the next move will be an advance of the Empire to the south in Indonesia, and this was a severe miscalculation. However, by July 25th of 1941, that is, at the time of the imposition of the embargo by the United States, Japan had a two-year supply of peacetime fuel and one-year supply of military fuel. In addition, Japan negotiated with Mexico to sell prospective oil fields, and with the governments of the Netherlands in exile, the Japanese had a certain advantage. It lasted until December 7th of 1941, and in the morning of the 7th Japanese planes attacked Pearl Harbor and the U.S. entered the Second World War.

On its own, this operation from a military standpoint was a big mistake. The pilots suggested striking not only at the ships, but also the on-shore fuel tanks, but Admiral Nagumo decided that everything possible was done, and ordered to retreat. Meanwhile, these containers contained 4.5 million barrels of oil, a reserve that the Americans had been accumulating for 10 years. Damaged ships could be repaired, but the Americans did not have another ten years to resupply the fuel at Pearl Harbor. No wonder Admiral Nimitz later wrote that if the Japanese had destroyed them with a few guns of 50th gauge, the war would have dragged on for another two years. The American ships would not be able to effectively fight from California. However, none of the higher ranks of the Navy of Japan thought of this.

On February 14th of 1942, a battalion of Japanese paratroopers landed in Indonesia and seized two oil refineries, Shell and Standard. Soon, the Japanese reached the rich oil mines Balikpapan in Borneo. As a result, by May 1942 the Japanese finally achieved what Hitler failed to achieve in Europe - provided fuel for Japan's full independence. Now it was able to receive 18 million barrels of oil a year, which was enough for everything. However, the Americans soon hit back.

In the summer of 1942 the U.S. Submarine "Grenadier" torpedoed and sank "Taiyo Maru" ship that transported over 1,000 specialists in oil production and Petroleum Engineers, nearly the entire group of professionals of the Japanese oil industry, to the East Indies.780 of them died.

Then, the U.S. decoders deciphered a Japanese radio code and gained access to all Japanese transport routes. All forces and mainly a pack of submarines were sent to intercept tankers, and by the end of the war it yielded an impressive result - one hundred and ten Japanese tankers have sunk. General LeMay was given all the planes based in Guam with a single order - to bomb everything that produced and transported fuel.

The commanders of the Joint Japanese Navy have shown rare self-confidence. Only by late 1943 they realized the possible consequences and organized convoys for tankers. It was too late, and such a great loss of vessels was not easy to overcome. In addition, the fuel shortage has affected the fleet. There was not enough fuel during the battle of Leyte Gulf, the Battle of the Solomon Islands, the Coral Sea and, finally, the Philippine Sea. However, not everyone knows that a shortage of fuel in the Japanese navy was caused not only by the American pilots and submariners, but also Dayaks savages of Borneo. They were famous for cutting off the heads of their defeated enemies. They did not just cut them, but also "prepared" them in a special way, and then hung them under the roofs of their huts. Warriors who earned the heads of the Europeans enjoyed special honor because the natives believed that such a head can give the tribe the same benefits that white people had. These heads were the Dayaks' best currency. No Dayak boy could marry without bringing his bride and her relatives at least one head of the killed enemy.

The English Major Harrison and his two assistants who could speak Malay were sent to these people. The British brought savages guns and taught them how to use them. The Dayaks began attacking the Japanese garrisons and killing Japanese soldiers. The Japanese could do nothing because they did not know how to fight in the jungle.

Another way to hurt the Japanese was common wild boar hunting. In Borneo people had long been hunting boar when migrating herds were crossing the river. Boars were shot with rifles and spears. Wounded animals were carried down the river, where they were picked up by women and children. At first villagers would eat wild boar, but then trophies became so numerous that only fat was cut off wild boar carcasses, and the rest was thrown away. Crocodiles enjoyed the leftovers; however, there was so much of it that they simply could not eat it all. Then the river carried boar corpses to the coast, where they would fall into the bay. This is where the oil rigs were located. Oil extraction became impossible. First, the poisoned water from the river was not drinkable. Second, because of the decomposing pig carcasses the water stank and attracted a great deal of crocodiles and sharks. An accidental fall into the water meant certain death. The Japanese went on a rampage, but since the mines employed Indonesian Muslims, it was impossible to make them touch a pig. Then Native American commandos arrived to the island and on top of everything else blew a few towers, which resulted in a reduction of oil production in Aravaca to a minimum.

The Japanese, however, tried to punish the Dayaks bombing their villages from the air. They aimed at bonfires strategically placed by the Dayaks, and only wasted their bombs. In the woods they were met with bamboo pegs driven into the ground and smothered in pig manure, traps with nests of wild bees and poisonous arrows of the Dayak for which there was no antidote. The Japanese were forced to leave the island.

Because of this and many others similar operations and mass destruction of the Japanese tankers, oil was lacking not only for ships but also refineries, and, accordingly, gasoline for airplanes, not to mention cars in Japan.

As a result, the streets of Japanese cities were filled with gas generating cars that ran on wood and rice straw. The U.S. Air Force even stopped bombing the Japanese oil refineries because there was nothing there to refine. Only in August of 1945 the last such plant in Japan was eliminated and the plant in Taiwan was severely damaged.

As a result, when American soldiers came to arrest the Japanese Prime Minister Hideki Tojo and he tried to commit suicide, they had to look for an ambulance with fuel for two hours, because all of them were empty.