Brazil in convulsions: Politicising the demonstrations and unifying the vanguard

Today's events will go down in history as those of a rediscovery of the streets by expressive segments of the youth and the workers. The growing indignation of the population is not only due to the rise in transportation prices in different parts of Brazil. It is the implosion caused by a cycle of social strangulation taken to the ultimate consequences by the bourgeois State apparatus, trying to regulate social life through the market and remunerating the capital in their systemic crisis. 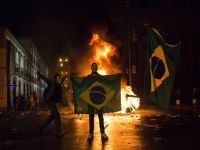 The movement of the youth and the workers, attacked by this cycle, has generated a wealth of culture which can contribute, if it is politicised and unified in the area of the vanguard, to move the block against the hegemony of the elites and move on from these demands coming onto the political scene. The scenario today is due to the social decline which was consolidated by taking away, en masse, social rights. Apart from the main questions connected with the living conditions of the workers, these demonstrations show the level of indignation felt by important sectors of the population, caused by the inversions of priorities chosen by Governments, sectors from the most diverse areas of society.

The streets were taken in the main state capitals in Brazil: a great part of the Brazilian youth is entering the dynamics of protest, the political forces are still surprised by the sheer size of the demonstrations , an important part of the youth - still tainted by the influence of the bourgeoisie ideology - questions the presence of the political vanguard (parties), not knowing that the majority of the soundbites that have animated the demonstrations have their history chiselled into the fight and resistance of these same vanguards.

One phase of this struggle has been won, and not only for reasons connected with the transportation fares. The fight is not connected with political flags which suspend the zone of comfort of the block in power.

We need to understand that the scenario of social convulsion is creating a new scoresheet for the political operator. This scoresheet is classical in the Marxist vision, in that to understand it, it is necessary to use the correct instrument of analysis for the corresponding reality.

The social convulsion that has arisen in this setting is inspired in a new type of fight: bringing workers to the streets, avenues, the doors of the palaces and parliaments. It suggest to the political operator as a collective organizer, the construction of a unit against hegemony, a struggle taken up by the revolutionary left with all its political diversity; for this struggle, it is necessary to claim without hegemonic references, the historical subjects which can challenge the order and create an impact by diffusing the fight among the people at this essential moment in the fight of the classes while organic sectors important in society are moving.

This is an extraordinary moment to prevent the steps taken by the social barbarism culture, fed by the monopolist bourgeoisie, from advancing. We need a correlation of forces favourable to stop xenophobia, chauvinism, social reactionary tendencies - the manifestations of Fascism.

The youth insists on staying in the streets; the governors are stupefied and foster the movement of bourgeous institutionalism; through the counter-hegemony agencies, it is necessary to advance the emergence of our class against the project of capital: we have to paralyse trains, metros, ports, airports, take the protests to the centre of stadiums, block roads, close schools, occupy lands, paralyse the public services, instigate a general strike.

All the powers of a fight for rights need to be brought into play in this social convulsion. However the political vanguard must be very preoccupied about the democratic relationship with the youth and workers who still do not understand the historic role that we should play and who are for now still living in the area of indignation.

The political scene with its rapid formation of settings allows one to understand that breaches were forged in the bourgeois institutionalism and that this is fundamental to allow us to act in the contradictions of the process. What is being decided is not a question of the political power that we shall have, what is the order of the day is that it is possible to fight and it is possible to win.

This is the lesson that we must take from this first moment of political and social confronting. But also, to understand that the bourgeois institutionalism will try to de-characterise the social movements; the media will behave, from now on, with their good little civic hypocrisy, or rather, pretending to stop the political movement of the masses.

The role of the social fighters right now is to foment in the broadest way possible the politicization of the fight through the demands massacred by the social strangulation sponsored by the capital. Apart from this it is necessary to educate the fighters of this process regarding the fight for rights as to the time and the hour to develop the deepest possible degree of unity against hegemony to build the possibility of being able to move the revolutionary block of the proletariat in these and other battles that will come in the near future.

From the Portuguese version Pravda.Ru