Is this a chain reaction or mass epidemic? Either way, the fact remains - the political upheavals in the Muslim world that began in Tunisia swept across North Africa and Syria, and now a wave of instability has reached Turkey. A member of the Presidium of the Academy of Geopolitical Issues Araik Stepanyan analyzed this complex, ambiguous situation in the country. 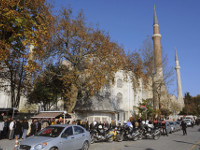 "We will identify the external and internal factors that have caused, for the lack of a better word, social unrest in Turkey.

Internal factors have deep roots. The main reason is the collapse of the Ottoman Empire after the First World War and the Turkish Republic established by the "father of the Turks" Kemal Ataturk. He decided to raise the status of the ethnic Turks that was low in the Ottoman Empire, turning them into an overriding ethnic group and create a political nation - the Turks.

In 1926, a law was passed stating that all residents of Turkey were ethnic Turks, and different names - the Kurds, Armenians, Laz, Circassian, and so on - were insulting to the Turkish national identity and must not be used. Everybody was recorded as Turks. And, although many years have passed, the first problem in Turkey is a problem of national identity.

There is a huge mass of people, more than half of today's Turkish population, who do not consider themselves Turks. They see themselves as citizens of Turkey, but ethnically they do not identify themselves with the Turks, and do not want to. But because they live in the country where they have to be Turks to have a chance for a career, they are considered Turks. In 2000-2002, Western funds conducted a secret survey of the Turkish population and obtained evidence that only 37 percent of all Turkey residents saw themselves as ethnic Turks. The national issue has aggravated, and rallies and slogans are convincing evidence.

The second internal factor that undermines today's Turkey is a debate about the type of the government - secular or theocratic. The elite of modern Turkey have serious disagreements about this. The heirs of the Ottoman Empire believe that the highest level of prosperity in Turkey was in the days of the Ottoman Empire, where all citizens were equal, except for Christians, and ethnicity was not emphasized. That means, people were Osman regardless of the ethnicity - the Turks, Circassian, or Kurds.

The secular government afraid of Islamic influence is holding to the legacy of Kemal Ataturk. This is the army general staff who until recently served as the guarantor of the Constitution by the secular power. But Erdogan came to power and abolished that item of the Constitution. Incidentally, this is a revolutionary step, and can be compared with the constitution of the Soviet Union whose sixth article stated that the Communist Party was the governing body of the Soviet state. Once it was removed, the state has collapsed. Eliminating his "sixth paragraph," Erdogan dealt a crushing blow to the General Staff and the army. Naturally, the army is very unhappy and wants to overthrow Erdogan, although it is not directly involved in the rallies.

Third internal factor is the Kurdish issue. The Kurds are seeking autonomy in Eastern Anatolia (the largest region of Turkey), their number is approximately 20 million. Despite the talks started by Erdogan (negotiations with Barzani, president of the Kurdish autonomy in northern Iraq, and Ocalan, the PKK leader) armed clashes between Kurdish rebels and the official Turkish army continue, with daily casualties on both sides. Thus, this is the third most important factor.

The fourth factor is the Armenian issue. Armenians living in the south-eastern and eastern Anatolia, the original Armenian territories of Western Armenia, have, so to speak, their hidden aspirations. They are hidden because they have bitter experience of being eliminated and thrown out. The Turkish elite, the intelligentsia, too, in turn, realizes that it is impossible not to recognize the Armenian Genocide. About three thousand Turkish intellectuals on Turkish websites apologized to the Armenians for the Genocide and eviction. Then there was football diplomacy with signing the agreement on opening the border between Turkey and Armenia. The Armenians are now fighting with diplomatic methods.

Turkish demographic policy denies all other nationalities. Turkey strongly advocates that 82 percent of the population is Turks. But for obvious reasons this is not the case. There is a vast array of Greek Muslims who do not even speak the Turkish language and as many Bulgarian Muslims.

The fifth factor is internal - it's Alawites, a religious movement with millions of people who adhere to the same religious beliefs as Bashar al-Assad, the Syrian Alawi. When I see banners proclaiming "Erdogan, you are a thief!" I understand that these are Alawites. In the course of combat activities in Syria, Aleppo in particular, gunmen took out everything - from machines to museum exhibits, and exported them to Turkey, with the connivance of the authorities, and sold or appropriated them.

But Gezi Park or Taksim Square where rallies are held now is a special topic that overlaps, incidentally, with the Armenian issue.

First, in 1500 sultan Suleiman presented this territory to his Armenian assistant who uncovered a conspiracy. In 1560, an Armenian cemetery was laid there. The cemetery existed until late 19th century and was eliminated after a well-known cholera epidemic, but the ownership was left to the Armenian community. After the genocide in 1915, when the Armenians were expelled, the owner clearly changed. Barracks were built there, then a park. When the authorities planned to build a shopping center, the community exploded. All ethnic minorities, anti-globalization activists, gays, lesbians, football fans, the "green" joined against the destruction of the park. Clearly, everyone had different views and goals, but the only reason was rejection of the current government that none of these social groups liked. Yes, individually they are in the minority, but this is the case where the sum of minorities produces the majority, incidentally, in contrast to Russia.

There is also an external factor. The U.S. lost interest in Turkey after the collapse of the Soviet Union. The Turks tried to start building a new Turkic empire, the so-called Great Turan based on pan-Turkism, but the Turkic-speaking states, newly formed in the Soviet Union, gave the initiative a cold shoulder despite the extent of the economic expansion of Turkey in these regions is impressive.

The U.S. does not really support these imperial ideas. Especially when Turkey did not provide its territory for ground operations during the recent war in Iraq, did not let the American ships into the Black Sea during the Russian-Georgian conflict in 2008, incidentally, rightly so, in accordance with the international status of the Black Sea and the Bosporus and the Dardanelles.

The White House is beginning to move away from its ally. Moreover, according to the plan of a military expert Ralph Peters of the National Military Academy of the United States, in accordance with the concept of the Greater Middle East, Turkey is disintegrated. A large Kurdistan is created, and Mount Ararat goes to Armenia. Most important task, of course, is to take control of the Bosporus and the Dardanelles, close access for Russia to the Mediterranean Sea, and so on. The U.S. has a clear plan and is implementing it. The European Union, of course, agrees with this plan.

America will not save Erdogan despite the fact that he supported the Muslim extremists against Assad. Only Assad is winning, and Turkey has lost its authority with the nearby neighbors. It is likely to face open hostility, because no one has forgotten the Ottoman Empire or the imperial motives of the Turkish foreign policy. Turkish leaders have painted themselves into a geopolitical trap. There are still chances of getting out of it, but, judging by Erdogan's recent statements, they are becoming slimmer every day.

All of these factors combined lead Turkey to a collapse. It will not happen overnight, but the trend is moving in this direction. All mass movements just show the causes, both external and internal. Therefore, even if the military who wants to overthrow Erdogan comes to power, and the constitution and the role of the General Staff is restored, it will be impossible to stop the process of globalization and crush the rebellion of ethnic groups.