Who is Iran's President Rohani?

The name of the new Iranian President, who substitutes Mahmoud Ahmadi-Nejád, ia Hasan Rohani, who won a free and fair election with over fifty per cent of the vote. Considered a moderate reformist, President Rohani is graduated in law and has great experience in external relations. 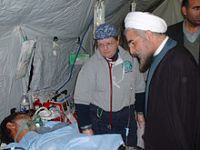 Born into a religious family in the city of Sorjeh, Semnan Province on November 13, 1948, Rohani enterer the Seminary of Semnan in 1960 to begin his religious education, transferring the following year to the Holy City of Qom, receiving lessons from prestigious Imams such as Mohaqqeq Damad, Sheikh Morteza Haeri, Mohammad Reza Golpayegani, Mohammad Fazel Lankariní and Sheikh Mohammad Shahabadi.

He entered the University of Teheran in 1969 and three years later, graduated in law, studying his Master Course in law at Caledonian University, Glasgow. Active against the regime of the Shah (Reza Pahlavi), he entered the world of politics after the return of the Ayatollah, Imam Ruhollah Khomeini, from France in 1979 and held meetings with student organizations in Paris and London.

After the Revolution, Rohani entered the new Parliament in Teheran and stayed for five successive mandates until 2000, when he became the vice-president of the Parliament and Chair of the Defence and External Policy Committees. From 1992 to 2000, he was spokesperson of the Parliament.

During the Iran-Iraq war, Rohani was a member of the High Defence Committee, Head of Air Defence and Vice-Commander-in-Chief of the Iranian Armed Forces. Rohani is currently the representative of the Supreme Leader of the Islamic Revolution, Ayatollah Ali Khamenei, in the National Security Council; he is a Member of the Discernment Council and the Assembly of Experts.

The new Iranian President speaks Farsi, Arabic and English, he has written around one hundred books and articles and has been involved in some 700 research works.