The ruling Liberal Democratic Party of Japan (LDPJ) agreed on a large-scale rearmament of the country's land and naval forces. The reform will focus on the creation of the Marine Corps, increasing the efficiency of air and missile defense, as well as equipment of the army and navy with modern weapons to attack enemy naval bases. 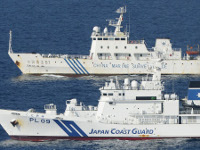 On May 30th, LDPJ Council of National Defense approved the draft of the full-scale rearmament of the country. This event was dedicated to the renaming of the Japan Self-Defense Forces into a full army of national defense. After the end of World War II, the Japanese authorities were not allowed to have full-fledged armed forces. The country adopted a new constitution that significantly limited military capabilities, even in terms of self-defense. The law provided for a complete abandonment of military potential by Japan. The country was not allowed to have offensive weapons, including bombers and missiles launchers of short and long range.

Ex-ministers of LDPJ Shigeru Ishiba and Gen Nakatani are the main ideologists behind the large scale rearmament of Japan. They presented a draft reform of the rearmament that was approved and sent to the Government for consideration. Shigeru Ishiba stated that the restrictions introduced after the war relating to the size of the Japanese armed forces have long been out of date.

Indeed, the Japanese Self-Defense Forces have been actively developing, and currently Japan is ranked fifth in the world in terms of military expenditure. Each year the country spends approximately $44 billion on arms, but cannot engage in the production and procurement of cruise missiles of various range and strategic bombers, capable of large-scale attacks.

Shigeru Ishiba said it was time for Japan to become fully entitled to form a full-grown army. However, he added that first the constitution of the country must be amended to eliminate the name "self-defense forces." He argued that the Japanese people could not forever give up warfare in resolving world conflicts with other countries.

If changes in the Constitution come into force, the Japanese army could apply full-scale air strikes against enemy military bases, as well as increase the effectiveness of anti-missile defense forces due to the tense situation on the Korean peninsula. In addition, Japan will create marine units capable of defending remote Japanese islands in the Pacific, as it was during the Second World War. Then the Japanese fought with their today's closest ally - the United States.

First of all, the Japanese authorities want to resolve the matter of the possibility of inflicting air strikes on military bases of the enemy. One of the documents states that a serious deterioration of the relations with North Korea could force the Japanese government to initiate a number of attacks on nuclear and missile ranges of the country. But first the Japanese army must be equipped with short-range cruise missiles and strategic bombers.

North Korea has repeatedly threatened the Japanese government with an air strike on their territory. First of all, it has to do with the American bases in Japan. Under an additional agreement between Washington and Seoul, the Americans are going to provide all the necessary military assistance in the event of any provocation on the part of Pyongyang. The relations between the two countries are extremely tense. North Korea has moved launchers to the east coast of the country, and is ready to shoot at any time.

A diplomatic visit of a Korean representative in Tokyo regarding the normalization of the relations between the countries did not help the situation. General Secretary of the Government of Japan Yoshihide Suga said then that he was pleased that North Korea has finally stopped its provocative actions against Japan and was ready to cooperate. Nevertheless, he added, the Japanese side would remain vigilant and continue to monitor all future actions of Pyongyang.

The Japanese authorities have other fears besides the threat from North Korea. The relations with China have deteriorated in recent years. This is why LDPJ suggested the idea of ​​creating marine units that would be used if the country is attacked from the outside. First of all, such an attack is possible on the Senkaku Islands that have been disputed by China and Japan for a long time. According to the Potsdam Conference of the post-war world, Japan should return all the occupied territories to China. The Senkaku Islands fit this category.

At a recent convention in Potsdam Premier Li Keqiang has openly stated that the Japanese had stolen the islands from China and have to return them soon. He said that after the war Japan signed a declaration in which they pledged to return all the occupied islands to China. The postwar world order must remain the same, and China will make every effort to protect it.

In turn, the Japanese government condemned the scandalous statement of Li Keqiang. Secretary-general of Japan Yoshihide Suga argued that the statement of the Chinese ignored the history, and Japan could not agree with them in any way. He added that the Senkaku Islands were Japanese native land both from historical and ethnic point of view. Japan owns these lands today. China's statement is only based on one-sided position.

After this declaration by the representatives of China, the Japanese authorities made a decision to equip its armed forces in the region by adding AAV7 amphibious assault vehicles and American convertiplanes V-22 OSPREY.

Valery Kistanov, director of the Center for the Japanese Studies at the Institute of the Far East, said that Japanese offensive weapons could be deployed in any direction. "Of course, first of all Japanese weapons would be directed against the DPRK, and then China. Japanese missile defense system is ramping up its power due to the increasing missile and nuclear forces in China. Either way the country will continue to spend billions of dollars on the military industry. According to Japanese political analysts and politicians, it is primarily due to the situation on the Korean peninsula and growth of China's military. These two factors are considered a threat by Japan, and therefore the country will actively rearm."

Valery Kistanov also noted that the amendments to the Constitution of Japan indicate tightening of the foreign policy of the country: "The leader of the LDPJ Shinzo Abe shares right-wing nationalist views. He believes that Japan was given undeserved military restrictions that prevented it from becoming a full-fledged global power. "

The Japanese government has increased spending on the military industry, which is primarily due to the changes in the aviation equipment of the country. The Japanese government plans to improve fifth-generation fighter F-35 with new ammunition featuring American navigation equipment Joint Direct Attack Munition. This equipment will operate free-falling bombs, which would increase the accuracy of air attacks.

In addition, by 2014, the Japanese authorities plan to conduct first tests of "Stealth" fighter. The country invested $470 million to create an aircraft invisible to radar systems. Work on the project was started in 2009 by Mitsubishi. The first aircraft will be called "Sin-Sin," and will be executed according to the American stealth aircraft technology.

The increase in military spending caused serious concerns in Asia. China opposes Japanese plans for the establishment of the army. A representative of the Ministry of Foreign Affairs of China advocated that the countries of Asia and the world community should pay special attention to all attempts to strengthen the Japanese armed forces. She also noted that it was Japan that started the Second World War in Asia.

Washington, by contrast, approves of the plans to expand Tokyo military program. Currently 50,000 American soldiers are placed in Japan. Strengthening of Tokyo would allow Washington to strengthen the relations with Japan and get a decent springboard for putting pressure on China.

The proposals of the Liberal Democratic Party of Japan would likely involve the development of the defense system of the country for the next five years. In the event that the reform is formally re-approved by the authorities, further relations between Japan and its neighbors may deteriorate. Asian countries are already watching the activity in Japan in the field of defense with caution. What should we expect next? It is clear that in general terms the military strengthening of Japan will not contribute to reducing tension in the region. In fact, it would trigger a new round of the arms race, especially in the countries with acute historical memory of the crimes of the Japanese samurai state.