The Palestinian ambassador to the United Nations (UN) Riad Mansur said on Friday (3rd) that the Israeli regime has demonstrated on numerous occasions that they prefer the expansion of Jewish settlements instead of peace and security. The construction on Palestinian land has been constantly criticized, even by allies of Israel, as detrimental to a "peace process" that the United States says they want to resume.

Through three letters addressed to the Secretary-General, Ban Ki-Moon, the President of the Security Council and UN General Assembly President of this international entity, Mansur strongly criticized the ongoing construction of Israeli settlements, describing it as "a violation of international standards and a disregard of the will of the international community."

Besides regret that the Palestinian nation is still under the oppression of the Israeli regime, the Palestinian representative denounced big government efforts of that institution to confiscate more Palestinian land, not allowing the efforts for a peace process to  result.

Mislabeling the continued expansion of "illegal" Israeli settlements, he warned that such action is dangerous.

Mansur also stressed that the forced migration of the original inhabitants of a country and the colonization of their land is considered an unjustifiable crime under international law.

A non-governmental organization among many that assessed Israeli settlements said on Wednesday (29th) that the Israeli regime plans to build about 1,000 new illegal settlements in Jerusalem (Al-Quds in Arabic) soon.

The NGO said it had signed contracts for about 300 homes in the settlement northwest of Ramot and 797 parcels will be offered for sale in south settlement, Gilo.

A new report also revealed that the Israeli government confiscated 1,977 acres of land in the West Bank, to carry out illegal constructions under international law only in 2012.

More than half a million Israelis live in more than 120 illegal settlements in the occupied territories of Palestine, held in buildings since the expansion of the occupation and annexation led by  Israel from the Six Day War or Arab-Israeli War in 1967.

The continued expansion of Israeli settlements in occupied Palestine has become the biggest obstacle to peace efforts in the region. The move was condemned by the UN and many countries and international organizations, based on the Geneva Convention, mainly prohibiting construction on lands occupied militarily.

The current government of Israel is formed by a coalition of right-wing and direct representatives of Israeli settlers on Palestinian land, which makes any initiative for the construction freeze, a condition of the Palestinians for serious negotiations, virtually impossible. 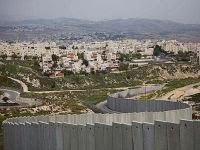