Russia opposes the initiatives of the west to create a no-fly zone over Syria, the Russian Deputy Foreign Minister Gennady Gatilov said on Tuesday. "Unfortunately, these destructive ideas keep popping up over time, but no one ever bothered to think about the consequences," said Gatilov.

It is worth mentioning that on March 19, the Supreme Commander of the North Atlantic Treaty Organization (NATO) in Europe, James Stavridis, said that member states of the Atlantic alliance have debated imposing a no-fly zone over Syria, as well as sending an offer of support to armed terrorist groups, according to the American newspaper The Washington Post.

Referring to the next trip of the Secretary-General of the United Nations (UN), Ban Ki-moon, to Russia, May 16 to 19, the Russian minister stressed and again reiterated Moscow's position on the Arab country to the Secretary-General of the UN, which means that all decisions should be made solely by the member countries of the Security Council of the United Nations.

According to the Russian official, as the situation in Libya has shown, the resolutions of the Security Council can be interpreted arbitrarily and changed to serve certain political interests.

In addition to reiterating his opposition to the Syrian people going through the same situation that the people of Libya did in 2011, Gatilov noted that "we all remember that the arms embargo imposed on Libya has been used by many countries to provide weapons to one party in the conflict and the no-fly zone that supposedly was created to protect the civilian population, has become a tool to dismantle the infrastructure of the country."

He also noted that, given the current situation in Libya, all proposals should be treated carefully raised about these issues.

Russia, is unlike the western countries, who take advantage of the situation in Syria and intervene in the internal affairs of the Arab country." We try to solve the problem through political and diplomatic means."

Damascus, besides having to deal with the terrorists, suffers interference from some western and regional countries through programs of financial support, weapons and logistics, thus seeking ways to overthrow the government of Syrian President Bashar al-Assad.

As the Turkish leader meets Barack Obama to complain about the situation in Syria, it is well to remember all of the Turkish intelligence officers who were arrested in Syria. They confessed that they have been trained in special assassinations, bombing and explosions operations by the Mossad in Israel. 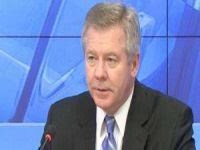