The population of the U.S. today is already 301 million people and growing. The growth is due to both the high level of births in the country and active immigration. Americans are often referred to as a "nation of immigrants" and the United States - a country of immigrants. A lot has been written on legal and illegal ways of immigration to the United States. How did immigrants made their way to the New World 100 years ago? It turns out that there were difficulties in obtaining a "green card" then as well. Russian magazine Niva wrote an interesting article about it. 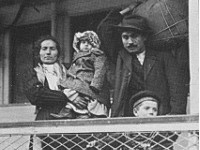 With silent lips. "Give me your tired, your poor,

The wretched refuse of your teeming shore.

Send these, the homeless, tempest-tost to me,

I lift my lamp beside the golden door!"

With these words the Statue of Liberty greeted those who came to the U.S. in 1913. Travelers who reached their destination disembarked their ships. For those who could afford to travel in the cabin (first, second or third class), landing in America, indeed, in most cases did not present much difficulty, and after a surface inspection of documents and luggage, government control would usually give them a pass, and the passengers were free to go where they pleased. Cabin passengers were not considered "immigrants" because they stated during the inspection that they had no intention of settling in America for a long time. The word "settlers" meant only deck passengers who had to endure the full rigor of the U.S. resettlement laws.

Since 1820, that is, as long as the American settlers have been counted, their number has been increasing dramatically. In 1820, 8,385 people arrived in the United States, and in 1903 there were already 857,016 people. Consequently, in 1882 a law was passed that established certain conditions for immigration. In 1903, with the publication of a new law on migration, these conditions have tightened, making leaving the ship very difficult and even excruciating for deck passengers.

The law banned several categories of persons from resettling in the United States, namely, the mentally ill or mentally retarded, crippled, people infected with communicable diseases, ill people, those convicted of crimes and misdemeanors (except political ones), and, finally, those "working under a contract." Those seeking a violent overthrow of the U.S. government were not allowed either, although the ways of determining this remain unclear. A person was considered mentally ill even if healthy at the time of arrival in America, but mentally ill in the past five years.

Special commissioners, doctors and inspectors, distributed to all ports of the United States, strictly monitored the implementation of laws on resettlement. They were required to inspect the new arrivals and determine whether they corresponded to the conditions of the law, whether to allow them to disembark or insist on sending them back.

Most of the settlers entered the American soil in New York, sometimes up to 12,000 people a day. Even before the ship entered the port, officials were sent to check the ship's documents and determine which of the cabin passengers must undergo a more detailed examination along with the deck passengers. Deck passengers had to remain on the ship until they were removed by the government small steamer boats that could accommodate about 400 people, and brought to shore, where they were subjected to an inspection by officers and controllers. Customs officials at the time inspected the immigrants' luggage. This was an easy task for customs officers because deck passengers rarely had expensive belongings subject to customs duty. During the inspection disguised policemen penetrated the crowd of deck passenger in order to find out if there were any suspicious persons among the arrivals. Various, sometimes wealthy criminals fled to America as deck passengers in hopes of getting lost in a large crowd.

After customs inspection a real torture for the settlers would begin. They were loaded in a small overcrowded steamer to the immigration control facility and waited in line for hours without getting off the ship. Then they had to answer the inspectors' questions. Doctors did not spend too much time with the passengers as they were examined in European harbors before boarding the ship. Passengers who were not allowed to enter the country under the U.S. law were immediately disqualified. In addition, the deck passengers during the first days of the voyage were vaccinated against smallpox. In 1903 only 1,797 people were not allowed to land, a very small number compared to the total number of immigrants.

Inspectors were much more serious with the settlers. They caught them on seemingly innocent issues:

"What will you do in America?"

"Do you already have a job?"

The immigrant hesitated, fearing that he would be sent back if he said "no," and rushed to answer in the affirmative, although, of course, did not know when and where he would find work in America. He was immediately separated from the others and sent back or sent to Ellis Island prison as a punishment for lying. In 1903 alone, no less than 1,086 of such "contract workers" were sent back to Europe from the United States.

But the correct answer to this question did not guarantee a "green card." Inspectors required the immigrants to present all available cash and asked what the immigrant intended to do with it. Based on the amount of cash and the reliability of evidence, the immigrant was either given a license to land or denied. According to Niva, it was not determined whether there was certain minimum cash or not, but it could range between 10 and 30 dollars.

Then inspectors asked about the purpose of the visit and any family members who had moved to the U.S. earlier. Only after this the immigrant was let go only to see another official. He was sent to the cashier, where European money was exchanged for U.S. dollars in order to protect the immigrant from being deceived by private money changers. Only after the exchange procedure was considered complete, the immigrant was set free.

This is the best course of events. Sad was the fate of those who were not given "a pass for a happy life" by doctors or inspectors. They were sent to Ellis Island where they were kept in the immigration control facility until their relatives or guarantors could be found. A special commission was to decide on their fate - allow landing or send them back. The immigrant had the right to appeal the commission's decision, but this happened very rarely because a clever lawyer and a fair amount of money were required for an eight-day debate in the court of Ellis Island. Most immigrants who have not received a permission to disembark had to return back to the ship on which they arrived, and were sent back for free.

Meetings between immigrants in Ellis Island who had relatives  in America took place in a prison-like environment. It was a large room divided by iron bars, and only through the bars they could see their family, talk to them, and then say goodbye, perhaps forever. In general Ellis Island conditions for the immigrants were relatively favorable.

The settlers who were allowed to disembark and did not want to stay in New York but rather move further into the country, were not set free right after the inspection. Immigrant control passed them to rail companies. The Railway Society transported them to their station where they had to buy tickets and board the train. Only from the moment when the last car moved, the settlers were set free.

It appears that not only today but in the early twentieth century it was not easy to get to the Promised Land.