Serbia loses the fight for Kosovo 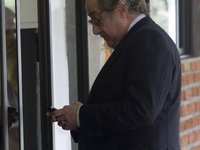 A few days ago an agreement was reached between Belgrade and Pristina on Kosovo. Western media have called it a historic event. However, in Serbia many saw it as a betrayal of the national interests. While the government is trying to justify the de facto recognition of Kosovo's independence, the opposition strongly condemns this act.

Head of the Democratic Party Vojislav Kostunica has called on his supporters to deploy peaceful struggle with violence against Serbia. Ultimately, the de facto recognition of Kosovo by Serbia may have serious consequences for the entire region.

The agreement on the normalization of the relations was signed by Prime Ministers of Serbia and Kosovo on April 19th. The talks were mediated by the EU High Representative for Foreign Affairs Catherine Ashton. Earlier, the Serbian leadership has repeatedly rejected the proposals of the European partners to resolve the Kosovo issue. By early April, when Belgrade once again refused to accept the proposed agreement, it became clear that negotiations were at an impasse.

However, last week, Serbian Prime Minister Ivica Dacic approved the agreement that does not guarantee the political rights and protection for Kosovo Serbs. The authorities have justified their decision by saying that most of the Serbs' requirements were included in the treaty. The procedure for the adoption of the document implies its approval by the parliaments of Serbia and Kosovo and the EU Council. What has prompted Belgrade to change its position on Kosovo?

The reasons for the Serbian authorities to accept this agreement are obvious. Through this act the government expects to accelerate the country's accession to the EU. Belgrade made it clear that short-term economic interests are more important than the national ones. The leader of the Democrats Vojislav Kostunica believes the new agreement to be shameful for Serbia. The authorities agreed to hand over the Serbian people to the mercy of the Albanian separatists and sold the territory of Kosovo in exchange for the date of the EU accession negotiations, said Kostunica.

In Pristina the reached agreement with Belgrade is perceived as a major victory, designed to secure the final recognition of the independence of Kosovo. Prime Minister Hashim Thaci stated that the agreement between the two countries was de jure recognition of Kosovo by Serbia.

However, there are still a number of disputable issues over the status of the region that cause controversy among politicians, diplomats and international law experts. According to some analysts, the rejection of Kosovo from Serbia is a violation of UN Resolution 1244 that reinforces the territorial integrity of the country.

In practice, the new agreement between Belgrade and Pristina infringes upon the rights and freedoms of the Serbian minority of Kosovo. The locals are outraged by the actions of the Serbian government that has agreed to unprecedented concessions to the West. Belgrade is trying to shift the responsibility for the security of Serbs to NATO forces that are not trustworthy. In addition, the Serb communities will now be subject to the laws of the Republic of Kosovo. The document only reinforces the autonomy of Serbs in terms of ​​culture, economics, and municipal sectors. The agreement does not prohibit military units of Kosovo Albanians to invade the Serb enclaves in the region.

Under the reached agreement, elections to Serbian municipalities should take place this year. The elections will also be conducted in accordance with the Kosovo law and under the supervision of the OSCE. Another question is whether the Serbs living in the region would agree to play by someone else's rules. In the near future an Assembly of Northern Kosovo may be formed that in all likelihood will act without regard to the authorities of the country.

It is clear that Kosovo Serbs are not ready to accept the agreements reached between Serbia and Kosovo under pressure from Brussels. Most residents of the province condemn the actions of the government of Ivica Dacic, and consider them an act of betrayal. Many of them are willing to take to the streets to defend their political rights in the breakaway republic.

Going back to the roots of the issue, it would be good to remember that Kosovo's independence was declared in February of 2008. Today Albanians make up 90 percent of the region's population, while the Serbs account for approximately ten percent. Ethnic cleansing that began in 1999 has led to the expulsion of two hundred thousand Kosovo Serbs. Observers note that the new agreement between Belgrade and Pristina could exacerbate the already difficult situation of the Serbian minority in the province.