A Palestinian released from Israeli jails, Rania Saqa, has brought to light that the Israeli regime injected detainees that are out of prisons with dangerous viruses. 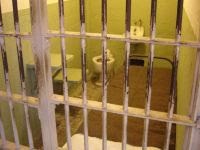 Noting that Palestinian prisoners suffer from serious and chronic diseases such as bladder cancer and liver disorders, Rania has revealed that the Tel Aviv regime injects prisoners with dangerous viruses before releasing them.

The released prisoner  has asked the many institutions and the international community to examine them carefully.

Most former inmates die after being released from Israeli jails.

Saqa Rania criticized the neglect of the Palestinian state to the situation in which the prisoners and their families find themselves and added that "the prisoners are subjected to the most cruel tortures."

A suspiciously large number of Palestinian prisoners are suffering from incurable diseases or permanent disabilities as a result of the critical situation in prisons that they suffer at the hands of Israeli regime.

Recently, the International Solidarity for Human Rights Institute warned that the Israeli regime uses and abuses Palestinian prisoners to test their new drugs, and this contradicts international medical and moral principles.

Currently, about 5,000 Palestinian prisoners, including women and children, are crowded in the jails of the regime in Tel Aviv. Most have not been tried and some have no formal charge against them, a strategy that the Israeli regime called "administrative detention."

United Nations Secretary-General Ban Ki-moon, voicing deep concern over what he called the "rapidly deteriorating condition" of Palestinian prisoners in Israeli custody who are on hunger strike, urged a solution to the matter be reached without delay.

"International human rights obligations towards all Palestinian detainees and prisoners under Israeli custody must be fully respected," Mr. Ban's spokesperson said in a statement that also underlined the importance of full adherence by all sides to previous agreement on the issue, including the implementation of prisoners' family visitation rights.

The International Convention on Civil and Political Rights came in into force 23 March 1976. Article 10 of the International Covenant on Civil and Political Rights provides that any person deprived of their liberty shall be treated with humanity and dignity.  The article imposes a requirement of separation of prisoners in pre-trial detention from those already convicted of crimes, as well as a specific obligation to separate accused juvenile prisoners from adults and bring them before trial speedily.

There is also a requirement that the focus of prisons should be reform and rehabilitation, not punishment. These provisions apply to those in prisons, hospitals (particularly psychiatric hospitals), detention facilities, correction facilities or any other facility in which a person is deprived of their liberty. The article compliments article 7 of the Covenant, which bans torture or other cruel, inhumane or degrading treatment, by guaranteeing those deprived of the their liberty with the same conditions as that set for free persons.

NB This piece is a TRANSLATION