China and Russia catch up with USA in rearms race 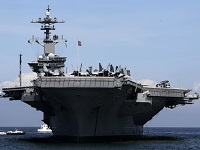 World spending on defense for the first time in 15 years fell by $1.75 trillion in 2012, which marked a 0.5-percent reduction in comparison with 2011, according to the Stockholm International Peace Research Institute (SIPRI). The share of the U.S. has fallen below the level of 40 percent for the first time since the collapse of the Soviet Union. Russia and China entered the top three of the countries that increased their military spending.

The research of the institute is based on public expenditure on the maintenance of armed forces, namely, military exercises, salary or remuneration for troops, as well as other employee benefits, operating costs, procurement of weapons and equipment, military construction, research and development works, administrative costs, etc. The total military spending of the world in 2012 in comparable prices made up 1.753 trillion dollars, which was 2.5 per cent of global GDP.

The Institute has also published the list of 15 countries with largest military budgets. The first place still belongs to the United States with its 682 billion dollars, accounting for 4.4 percent of GDP. The second place is taken by China with $166 billion (2 percent of GDP), and the third place - by the Russian Federation with $90.7 billion (4.4 per cent). The statistics on the U.S. is official. Then comes the United Kingdom - $60.8 (2.5) and Japan - $59.3 (1.0). The top five accounts for 60 percent of world military spending - 1.06 trillion dollars.

Unlike the U.S., China and Russia have increased their military spending by 7.8 and 16 percent respectively during the accounting period. However, as for GDP percentage-wise, their share in comparison with 2003 remained unchanged, whereas it increased in the U.S. (from 3.7 to 4, 4 per cent). Therefore, an arms race on the part of Russia and China does not make sense.

On the other hand, a slowdown or even a fall in the rate of military spending in the U.S. is connected with economic stagnation, budget savings and the reduction of the mission in Afghanistan. The same applies to U.S. partners in NATO. SIPRI experts predict a further decline of the U.S. share in global military spending after NATO troops are withdrawn from Afghanistan. In terms of GDP share, Saudi Arabia enjoys the highest figure - 8.9 percent. The U.S. and Russia follow with 4,4 percent. All other countries have a much smaller share.

Let us make a stop at this top three. Their share in world expenditure is as follows: United States - 32 percent, China - 9.5, Russia - 5, 2. Russia and China face similar challenges: technical re-equipment of the army and the navy, so their military budgets will grow objectively. In Russia, the increase will be by 53 percent by 2014. Prior to 2020, under the state rearmament program, Russia has a goal to increase the share of new-generation hardware to 70 percent. Twenty trillion rubles (689 billion dollars) have been assigned for the purpose.

China's defense industry by 2025 will become the largest in the world, according to the forecast from the National Intelligence Council of the United States from 2008. This is a long-term perspective - a part of the "Chinese Dream", to protect sovereign interests and put an end to strategic interests of the Western dominance in Asia and the Asia-Pacific region. In addition, Beijing has ongoing territorial disputes with Japan, Vietnam and the Philippines in the South China Sea.

China has ambitious plans to improve strategic forces, including the nuclear submarine fleet; the country also plans to create a strategic bomber. In the next ten years, China should develop fifth-generation fighter jets and aircraft carriers, including through cooperation with Russia. China's military budget, according to IHS Global Insight, will double from 2011 to 2015, exceeding the combined defense spending of all other countries in the Asia-Pacific region.

China has a long way to go to catch up with the USA, of course. However, the correlation between them has decreased from 7 to 1 in 2003, and then from 4 to 1 in 2012, SIPRI's Sam Perlo-Freeman, one of the authors of the report, told the  Associated Press. But he stressed out that the quality gap was still incredibly high. For example, the U.S. has 11 aircraft carriers, while China - only one. "It takes time to make quantitative indicators develop into qualitative changes," said Perlo-Freeman.

There is no need for the U.S. and NATO to rearm. Their armed forces have long been working for specific military conflicts. The Soviet threat faded into the past, there is no threat from Russia, the Chinese threat is looming on the horizon. The U.S. has scheduled the further reduction of the military budget for 2013 by 87 billion, then before 2017 - by 259 billion dollars, and in the next ten years - by 487 billion.

The emphasis is to be made on more compact, yet state-of-the-art military hardware. However, the Congress does not like such an approach of the military. During a recent meeting of the Committee on Defence, Minister Chuck Hagel was told that his mission was not to "cut out the heart of the Pentagon."

Aside for the above-mentioned reasons, the reduction in military spending in the United States is based on the fact that the world has been cutting the procurement of advanced U.S. weapons, such as Joint Strike Fighter by Lockheed Martin, said Simeon Wezeman, a senior researcher at the SIPRI. This is the case of Canada, Italy and the Netherlands. Many countries rethink their budgets in favor of less expensive models, and their budgets are tight, the analyst said. Twenty of thirty-seven European countries have reduced their military spending, except for Germany and Ukraine that increased military spending by 24 percent (1.1 percent of GDP).

As for other global trends, one may point out an increase in military spending in the Middle East, with an average of 8.4 percent (Oman - 51 percent, Saudi Arabia - 12, Qatar -10. In Asia, due to the growth of China's military power, neighboring countries prefer to rearm too. Vietnam's growth, for example, in 2003-2012 amounted to 130 percent (Indonesia - 73 percent). North Africa spent 7.8 per cent more funds in 2012 than in the previous year, due to the fight against terrorism in the Sahel. Algeria takes the lead here (5.2 percent). SIPRI noted that there was no evaluation data available on Iran and Syria. As for Saudi Arabia and Qatar, the institute used the evaluative data from 2011.

Latin America increased spending by 4.2 percent. The countries that demonstrated the most representative results are Paraguay (43 percent) and Venezuela (42 percent). The fight against drug cartels in Mexico led to the increase in military spending by 9.7 percent in comparison with the previous year. Australia and Oceania increased the spending by 3.3 percent. "We see the things that could be the start of a shift in the balance of global military spending from wealthy Western countries towards developing regions," said Perlo-Freeman.