The attack on the African American leader Martin Luther King, gunned down on April 4, 1968, at a motel in Memphis, now 45years ago, is considered by many researchers as part of a grisly plot that also included also the killings of black leader Malcolm X and John and Robert Kennedy. 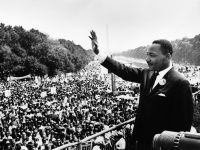 Previously, the world had been shaken by the assassination in Dallas on November 22, 1963, and the conspiracy to assassinate Malcolm X on February 21, 1965.

King and Malcolm challenged the apartheid regime, established in the United States to replace slavery, abolished by President Lincoln. The founding fathers of the first republic in America kept black slaves since 1776, as part of their estate, under a strict legal system of racial separation.

Blacks lived crammed into ghettos and had access forbidden to them to public places reserved for whites, such as transportation, health services, shops, schools, etc.  The work they were intended for was the toughest and worst paid.

The very restricted access to the voting system guaranteed the durability of the system that its thrusters were in charge of exporting to other regions for expansion.

An example of racism in the U.S. South materialized on October 19, 1960, when the Rev. Martin Luther King was arrested in Atlanta for refusing to leave a restaurant where they refused to serve him. Months earlier, the Reverend had been found guilty, with the sentence suspended, for a minor traffic offense, in DeKalb County, in the southern state of Georgia.

The judge held that the  sit-in in Atlanta was the reason they expected to try and sentence him to four months of forced labor.

Those who knew how bad a sentence to hard labor in Atlanta could be, especially for blacks, feared for the life of the Reverend. King was suddenly "awakened and taken from his cell at 4:30 in the morning, handcuffed and transported to a dark prison, deep in rural Georgia" (2)

The Georgia Governor, Ernest Vandiver, before the campaign of John F. Kennedy, then a candidate for president, said that to repeal the sentence, would be electorally disastrous in the south, a month before the election. He said they would lose at least three states. Robert Kennedy had to call the judge, who criticized at first, but the indignant reaction of the Senator's brother the next day resulted in the delivery of Martin Luther King.

The valiant African-American leaders were at the head of black resistance against the system, taking effective ways such as sit-ins in prohibited public places and transport, as well as boycotting shops and theaters. Laws sponsored by Kennedy intensified the struggles.

The federal government had to resort to the National Guard to protect Martin Luther King, James Meredith and other leaders, because during the peaceful actions they undertook, they were threatened and beaten by hordes of southerners who violently opposed the changes.

King and Malcolm became targets not only of racists, but also the military-industrial complex, not only with their own racial struggles and uniting to radicalize and organize movements, such as the meeting of 250 thousand people in Washington against the war in Vietnam, where King delivered his famous speech "I Have a Dream."

This progression also happened in former standard-bearers of the Cold War such as the Kennedy brothers, whose support for these movements was alienating the established power of the elite and its main agencies: the CIA and FBI.

Of the FBI director J. Edgar Hoover, Herbert Jenkins the police chief of Atlanta said that two of the three enemies that were most hated were Kennedy and King (3). Robert Kennedy considered Hoover a blackmailer and a threat to democracy.

The head of the Central Intelligence Agency, Allan Dulles, organized conspiracies against Cuba and other Third World countries, so that Kennedey decided to replace him.

The close monitoring of activities and privacy of the quartet was turning into harassment and threats that Hoover and Dulles converted into crimes against these four persons. They had the motive, the opportunity and the means.