The rare courage of Bradley Manning

Wikileaks announced that it will plead guilty on 10 of 22 charges that have been made, including passing information to unauthorized persons. But will plead "innocent" in the other 12 charges they are accused of, such as spying for the enemy, with a sentence of life imprisonment. 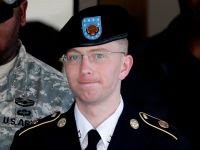 For the first time, Bradley could speak publicly about what he did and why. His actions, now known by his own words, show a very brave young soldier.

When he was 22, the Bradley Manning gave secret documents to WikiLeaks. Among these documents, a video known as "Collateral Murder," in which a U.S. military Apache helicopter can be seen, killing 12 unarmed civilians, including two Reuters journalists, and wounding two children.

"I assumed that if the public, especially the American public, saw that video, maybe some debate would arise over the military and our foreign policy in general, as it was applied to Iraq and Afghanistan" - Bradley said before the military tribunal that is the judge during the formalities of the session in which he pleaded guilty on some charges. - "I assumed that the video could lead to American society reconsidering the need to engage in counterterrorism operations, without knowing anything about the situation of human persons against whom they shoot every day."

"I was very upset when I did not see any reaction to injured children." What most disturbed Bradley were the soldiers who find themselves in the video, who "do not seem to give any value to human life and refer to [the targets of the shots] as "dead bastards,"  People who came to rescue the wounded were also fired upon and killed. The actions of American soldiers who find themselves in that video is typified as a war crime under the Geneva Conventions, which prohibits firing on civilians; preventing rescue and relief of the wounded, and destruction of corpses to prevent them from being identified.

Nobody's asked or urged WikiLeaks to take the documents, said Bradley. "No one associated with WikiLeaks Organization (WLO) pressed to give them more information. The decision to hand over documents to WikiLeaks was entirely mine. "

Before making contact with WikiLeaks, Bradley tried to interest the Washington Post to publish the documents, but received no reply from the newspaper. He also tried to make contact with the New York Times, without success.

During the first nine months of detention, Bradley was kept in solitary - which is characterized as torture, as the insulation can lead to hallucinations, catatonia and suicide.

Bradley made the plea of "innocent" in the other 12 crimes that prosecutors accuse him of in the military court, among others of spying for the enemy and collaboration with the enemy, whose sentence is life imprisonment.

Bradley Manning's actions remind of what Daniel Ellsberg did, who released the "Pentagon Papers," in which he exposed the lies of the U.S. government and hastened the end of the Vietnam War.