Tension rises in Asia with the threat of nuclear conflict

The Democratic People's Republic of Korea said that the United States is responsible for growing tensions on the Korean Peninsula due to large-scale military maneuvers that they are performing together with South Korea, which threaten the sovereignty of the Korean People. 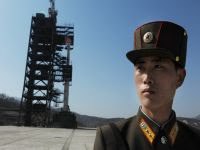 The army of the Democratic People's Republic of Korea (DPRK) announced that it received orders to launch a nuclear attack against the United States, which in turn ordered the installation of missile defense radar on the island of Guam, located in the Pacific.

The General Staff of the Korean People's Army, in a statement issued on Thursday (4th), said that U.S. threats will be crushed by the military personnel and people of the DPRK.

"The revolutionary armed forces operation was finally examined and ratified," said the statement, which reads that "it would be better that the United States reflect on the grave situation prevailing."

The U.S. Navy carries missile defense radar to install near the coast of Korea with the purpose of monitoring military movements in the Asian country, said a spokesman for the Department of Defense of the United States.

The United States install their radars near the territory of the DPRK with the intention to detect the possible launch of new missiles. The radar is from the naval base at Pearl Harbor.

On Monday (1/4), the United States sent the destroyer USS Fitzgerald, able to shoot down missiles near the coasts of Korea as a measure that will provide greater options for missile defense.

On Tuesday, they sent another destroyer, the USS John McCain, to the Korean Peninsula.

The tension between the DPRK and South Korea deteriorated after the Security Council of the United Nations (UN) imposed new sanctions on the People's Democratic Republic of Korea for performing another nuclear test on the 12th of February.

The situation worsened after Washington sent its B-52 and B-2 bombers to the region  and nuclear-capable F-22 stealth fighters. The United States and South Korea held military exercises on the Korean Peninsula, which have been condemned by the Democratic People's Republic of Korea as "provocation and threats."

The DPRK also announced the withdrawal of South Korean officials from the Kaesong industrial zone on the border between the two countries.

"The DPRK already declared that it would no longer remain a passive onlooker to the U.S. imperialists' frantic moves to ignite a nuclear war but make every possible effort including a preemptive nuclear strike to defend the dignity of the supreme leadership of the country and the destiny of the nation.
If the U.S. imperialists provoke a nuclear war against the DPRK, they will not be able to escape a miserable ruin in face of the powerful precision nuclear strike means of the DPRK.

The south Korean puppet regime will not be an exception as it is offering south Korea as the ground for displaying supplicated nuclear weapons and theatre of test nuclear war of the U.S.

The U.S. and the south Korean warmongers had better stop their rash actions, deeply aware of the gravity of the prevailing situation. "