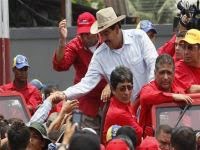 "The population of Venezuela is preparing to continue the revolutionary work, constructing socialism in the 21st  century, which is President Hugo Chávez's historic legacy," he said to a crowd in the western Llanos state of Barinas.

Nicolás Maduro placed the late President in a line with other great freedom fighters, who died in the struggle to liberate the homeland from foreign domination: Simón Bolívar and Antonio José de Sucre. Both liberators are remembered in the names of Venezuelan states, the southern state of Bolívar and the eastern state of Sucre.

"Hugo Chávez will always be remembered in the hearts of his people, because he loved them, he never betrayed them. He left a huge legacy of social missions and other benefits for the population of Venezuela," the presidential candidate, Nicolás Maduro, pointed out.

Driving a bus to Barinas was an ironic allusion to the opposition's clamour that he is "only a bus driver." Can a bus driver become President of Venezuela? Yes, he can, because the Venezuelan masses love him, just like they loved the late Hugo Chávez.

The Bolivarian Republic of Venezuela is a socialist country which respects the working masses, not only a small handful of a few self-chosen snobs, calling themselves "elite," whatever that might mean. In the eyes of the working class, they are puppets of the ex-imperialists, eager to sell out the homeland to foreign interests.

"Comandante Chávez was a prophet in Sabaneta de Barinas, Venezuela and all of Latin America," Nicolás Maduro emphasized in his campaign speech. He visited the house where Hugo Chávez was born, to meet with the Chávez family. Hugo Chávez was a Llanos man. He loved the wide grassland of Barinas and often sang Llanos songs.

The oldest indigenous traces in the state of Barinas date back to times between 300 and 600 AD. These settlers left antropomorphous and zoomorphous petroglyphs. Their rock carvings are considered by scientists as a form of symbolic communication, a sort of pre-writing. The Indios built earth mounds, which were used for vigilance, burials and as refuge during times of inundation.

Adán Chávez, Hugo's elder brother, is the current Governor of Barinas. He welcomed Nicolás Maduro, saying, "From Sabaneta to Miraflores." Miraflores Palace is the Presidential office in Caracas. "Without undue triumph, we can say that we will win a thorough victory on the 14th of April, because Hugo's spirit lives on in the people of Venezuela," Hugo's elder brother explained.

Adán Coromoto Chávez Frías was born in Sabaneta de Barinas on the 11th of April 1953. He is the oldest son of Hugo de los Reyes Chávez and Elena Frías de Chávez, who both worked as schoolteachers for most of their lives. The Chávez family has indigenous, Afro-Venezuelan and Spanish roots.

One of their ancestors was the Venezuelan freedom fighter, Pedro Pérez Delgado (1881-1924), better known as "Maisanta." He led a rebellion against a former dictatorial president of Venezuela in 1898. Some of the land in Barinas, which originally had belonged to him but had been confiscated, was bought back by the Chávez family.

Adán Chávez is Maisanta's great-grandson. He studied Physical Education at the University of the Andes (ULA) in Mérida, where he later taught as professor. In 2007/2008, he served as Venezuela's Minister of Education. In November 2008, Adán Chávez was elected as Governor of Barinas, following in the footsteps of his father, who had governed the state from 1998 to 2008.

María Gabriela Chávez, the late President's daughter, supports Nicolás Maduro as well. "Let's campaign for Nicolás, for our dear Homeland," she announced via twitter. María Gabriela and her sister, Rosa Virginia, had accompanied their father during his battle against cancer. They flew to Cuba with him, where he underwent several operations. The last photo, taken before his death, shows him reading Granma, a Cuban newspaper, with his two daughters on each side of the hospital bed.

María Gabriela Chávez graduated in Communications from the Bolivarian University in Caracas. She is 30, married, with children. Her elder sister, Rosa Virgínia Chávez, graduated in International Relations from the Central University of Venezuela. She married Jorge Arreaza, the Venezuelan Minister of Technology and Science. They have children as well.

Rosa Virginia Chávez is due to commence work in the newly formed Presidential Commission for the System of Bolivarian Museums in Venezuela, with headquarters in the Cuartel de la Montana of Caracas.

The entire Chávez family is loved and respected by the masses of Venezuelans, because they are decent, hard-working people, giving their best in the service of the homeland. All of them stand united behind the presidential candidate, Nicolás Maduro, who started his election campaign with the promise of fighting against corruption and speculation in Venezuela.

He wants to create micro-missions, an idea of the late President. In these micro-missions, people will organize themselves in companies and institutions to watch over the correct use of financial funds.

"We are going to traverse the land to the last palm tree. We are going to travel all over the homeland, with all of the homeland mobilized. We will travel the route that Comandante Chávez left us," Nicolás Maduro announced. He plans to visit about four states per day on his very short, very intensive presidential election campaign of 14 days.