Israeli forces have launched a campaign of arbitrary arrests against media professionals in the West Bank and Jerusalem.   Several were shot at while covering demonstrations

The Addameer Association for Human Rights and Prisoner Support is deeply concerned about the increasing number of arrests of journalists and communications professionals in the West Bank and Jerusalem, especially since the beginning of this year, with records of numerous cases of detention without clear and specific charges, which reveals a process of arbitrary imprisonment in order to silence the broadcast news coverage of the current situation in Palestine and hurt freedom of expression.

There is also the case of a journalist held under house arrest in the city of Jerusalem, and who was forbidden to enter the West Bank.

Next, chronologically, are the names of the journalists detained in Israeli jails:

One. Yasin Abu Khadir of Shuafat / Jerusalem.  He is the oldest Palestinian journalist held in Israeli prisons. He was arrested on 27/12/1987 and faces a sentence of 28 years. He worked at the newspaper Al-Quds.

2nd. Mahmoud Issa, of Anata / Jerusalem. He was arrested on 06/03/1993 and faces three life sentences and 41 years. He was working at the newspaper Alhaq Alhoriya, published in the Palestinian territories occupied in 1948.

3rd. Mohammed Taj from Tubas / Jenin. Detained since 19.11.2003 and sentenced to 14 years in prison. He worked as a writer and journalist in the Front for the Liberation of Palestine.

4th. Ahmed El Saifi, Birzeit / Ramallah. He was a student at Birzeit University, where he was studying journalism. He was arrested on 08.19.2009 and sentenced to 19 years in prison.

5th. Amer Abu Arfa, Hebron. Administrative detainee since 20/08/2011, without formal charge or trial. He worked as correspondent of Shihab Agency.

6th. Sharif Rajoub in Hebron. Detained since 06.03.2012 and awaiting trial. He worked in radio Sawt Al-Aqsa Mosque in Hebron.

7th. Murad Abu Baha, Ramallah. Detained since 15/06/2012. Awaiting trial. He worked as a press officer of the Legislative Council in Ramallah.

Eight. Annan Ajawi / Jenin. Is 28 years old and was arrested on 16/01/2013, when he was returning from his trip to Egypt. Detained without formal charge or trial. He worked as a journalist at several institutions.

9th. Mohamed Saba'na of Qabatiya / Jenin. Arrested on 2/17/2013 in his return from Jordan. He is in custody until investigations are completed. Mohamed  Saba'na is a cartoonist.

10. Musab Shawar of Hebron. He was arrested on 25/02/2013 and yet imprisoned without formal charge. He worked at Radio Hebron, as a presenter on the program which addressed the situation of Palestinian prisoners.

11. Bakr Attili, from Nablus. He is 27 years old and was arrested on 06/03/2013. Detained without formal charge or trial. He worked as a photographer and independent producer of many TV channels.

12. Tareq Abu Zeid, Jenin. He was arrested on 08/03/2013 and is in custody until investigations are completed. He worked as a correspondent for Al-Aqsa TV.

13. Walid Khaled of Sakaka / Salfit. He was arrested on 10/03/2013 and is in custody until investigations are completed. He was the editor of the newspaper Palestine Today.

It is noteworthy that the journalist Rasim Obeidat was banned from areas of the West Bank since 01.30.2012 without specific justification for this impediment. Importantly, such a ban is a violation of the laws and conventions on freedom of journalists and the full exertion of their work.

Besides the difficulties of the work of journalists who work under harsh conditions to cover events in the Occupied Palestinian Territory, it is observed that there are severe restrictions imposed by occupation forces, and violence against journalists and photographers impeding them from pursuing their work for the transmission of international developments.

We recall here the injuries suffered by the photojournalist Atta E'oissat and Mahfouz Abu Turkish journalist Israeli forces shot tear gas and rubber bullets in the occupied city of Jerusalem. And that on 08/03, the photographer Haitham Khatib was directly hit by bombs and photojournalist Jihad El Kadi was shot in the abdomen while covering clashes in the Ofer checkpoint, near Ramallah.

The Addameer Association strongly condemns the continued harassment committed by the Israeli army against journalists and reporters. This practice is a clear violation of human and professional rights.  It is a flagrant violation of all laws, international norms  and conventions that guarantee freedom of opinion and information. Addameer also believes that the arbitrary detention and violence against Palestinian journalists is part of a systematic policy aimed at silencing the Palestinian media.

Finally, Addameer deplores the silence of international institutions regarding the situation of Palestinian journalists, jailing, applying direct pressure and asks the authorities and human rights organizations to demand the immediate release of the journalists and media professionals held in Israeli jails. 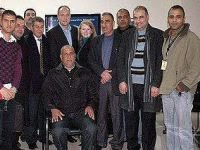