Maduro: "I'm ready to be the president of Venezuela"

President of Venezuela, Nicolás Maduro, in a political act in the city of Maracaibo (AVN) 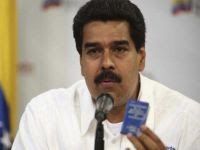 "The people will win on April 14 in the state of Zulia, Venezuela and achieve rhe biggest victory in the political history of the country," vowed United Battle Command.  Hugo Chavez commands the election campaign of the candidate Nicolás Maduro in state of Zulia.

"Comandante Chavez, the people of Zulia swear that you will not fail, and that will lead to a win for Nicolás Maduro throughout Venezuela," they said in unison.  The revolutionaries were present in a political demonstration in Luis Aparicio Stadium, in the city of Maracaibo.

The Luis Aparicio stadium "was small for the Revolution," said the militant socialist Maduro who packed the sports complex.

Maduro added that "once you elect me on April 14, Zulia'll have me a president to support the people, women and youth."

The head of the Commandante Hugo Chavez's state of Zulia, Francisco Arias Cárdenas, ratified the commitment of giving 1.2 million votes to Nicolás Maduro.

"Thanks to the people of Zulia not failing Chávez, we commit to fulfill the tasks which he stated," Maduro said.

The candidate of the Bolivarian Revolution sent a greeting to all artists and sportsmen of Venezuela and also took the opportunity to thank and congratulate the Movement of Independent Artists, a group that confirmed their support for the Socialist candidate in the upcoming elections of April 14

Maduro invited artists to the founding of the Great Movement for Peace, to be held this Saturday (23rd) in the city of Maracay, state of Aragua.

Given the expressions of support received in Zulia, Maduro said he would never relinquish the task indicated "by the Supreme Commander Hugo Chávez: the construction of a socialist homeland full of love."

He added that every day as part of the government, he gives his life to building peace and a homeland where "kids today within 30 years will feel proud of the founders of this Republic of Bolívar."

Maduro joked about the candidate of the right, Capriles Radonski, that for every ten words he pronounces, he  "mentions me nine times.  He has an obsession with me," he joked.

For the socialist candidate, Capriles "he is a Pharisee, the only thing he does is talk, while we govern for the people." Candidate Maduro said he is ready to be the president of Venezuela.