Wikileaks and the new Pope

Wikileaks: Involvement of Pope with a weakened dictatorship with criticism of Kirchner

A paper on the subject was prepared by the U.S. Embassy in Buenos Aires in October 2007.

The involvement of the then Cardinal Jorge Mario Bergoglio with the crimes committed by the Argentine dictatorship weakened their criticism of the political and economic decisions of the Kirchner government, according to the U.S. embassy in Buenos Aires. The revelation about the new Pope, who chose the name Francis to use in his pontificate, was made by the website Wikileaks in 2011, based on an original telegram dated October 11, 2007.

A few months earlier, in May 2007, the government of Nestor Kirchner was widely criticized within Argentina and the president did not know if he should seek reelection or cast his wife, Senator Cristina Kirchner then, as a candidate. The idea was to wait as long as possible and only advertise the application in July of that year.

Strikes by teachers in the province of Santa Cruz caused the resignation of the provincial governor on May 9.  A corruption scandal involving several ministers and public tensions with the Catholic Church were some of the challenges of Kirchner.  A second telegram from the U.S. embassy leaked by Wikileaks, is that one of the most vocal critics of the government was that of Cardinal Bergoglio.

Relations between the Kirchner government and the Church worsened when former Bishop Joaquin Pina prevented Carlos Rovira, Kirchner governor of the province of Missiones, wanted to make a change in the law approving successive reelection. The proposal was defeated by more than 13 percentage points. Kirchner, at the time, came to declare that "God has no party" and therefore the Church should not meddle in politics.

Bergoglio said the Church should not get involved with such official politics, but supported the campaign led by Pina. The then-cardinal also expressed concern about the "weakening of democratic institutions in Argentina" and the growing concentration of power in the hands of Kirchner. During the teachers' strike in Santa Cruz, a bishop further aggravated the crisis between the government and the Church saying that Kirchner treated as "enemies" those who thought differently from the government.

Born in 1936, Bergoglio was 40 when the Argentine military forcibly deposed the government of Isabel Perón and established a military dictatorship. Cardinal Bergoglio, like many religious figures of  similar age, is accused of not having worked to prevent the deaths of more than 30,000 Argentines - many of them leftists - between the years 1976 and 1983.

Bergoglio would have especially failed in not protecting the lives of two colleagues from the Jesuit order who were opponents of the Argentine dictatorship. Orlando Yorio and Francisco Jalics were taken to the School of Mechanical Armada (ESMA) on May 23, 1976, where they were imprisoned and tortured by the bodies of the repressive government of Jorge Videla, as told in the book "The Silence" by journalist Horacio Verbitsky.

More on the subject:

The Pope was summoned to testify about the disappearance of priests.

In the Prophecy of St. Malachy: Benedict's successor already has a name and will be the last Pope.

The "Prophecy of the Popes" is attributed to St. Malachy, an Irish archbishop who was canonized a saint in 1190. In his predication, dated 1139, Malachy prophesied that there would be 112 more popes before Judgment Day. Benedict is supposedly the 111th Pope.The Argentine cardinal accused of collaborating with the dictatorship is the new Pope. 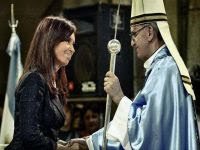