Book Fairs in Cuba and Venezuela

The Book Fair in La Havana, Cuba (February 14 - 22) has just ended, now Filven in Venezuela (March 08 - 17) is due to begin. In Cuba, just like in Venezuela, books can be bought at low cost, since book publications are sponsored by the state. All segments of society can afford to buy and read literature.

According to the Cuban news media Granma, more than 320.000 people visited the Book Fair in La Havana, which is traditionally held at the fortress of San Carlos de la Cabana. The Book Fair is now travelling around Cuba, to be presented in all of the other provinces on the island. It has become a yearly tradition since 1992.

In 2013, the Cuban Book Fair placed its accent on modern Latin American authors. More than one million new publications were presented in La Havana. The special guest for 2013 was Daniel Chavarría, a Cuban-Uruguayan writer. Angola was invited as guest country, with a number of events highlighting Angolan culture, history and literature in its own pavilion.

All in all, 37 countries and 390 authors showed their literary novelties in Havana. For next year, Ecuador will be the guest country at the 23rd Cuban Book Fair. Nersys Felipe and Rolando Rodríguez have been chosen as the special authors to be featured.

When the Brazilian intellectual and theologian, Frei Betto, visited the Cuban Book Fair in 2011, he praised the role of ALBA countries and their progressive programmes to eradicate illiteracy by giving all children free education and free access to books in libraries. These countries are also selling books at low prices so that everybody can own books and read. This humanistic tendency is mirrored at the increasingly popular Book Fairs of Cuba and Venezuela.

Gustavo Pereira is not only a poet, he also wrote the preamble to the Constitution of the Bolivarian Republic of Venezuela. Furthermore, he compiled a collection of texts written by the Liberator, Simón Bolívar: "Escritos anticolonialistas" (Anti-Colonial works).

Christian Valles, director of the Venezuelan National Book Centre, announced readings and workshops with Gustavo Pereira at the 9th Filven in Caracas. Humberto Mata, director of the Biblioteca Ayacucho, a state owned publication house, said that Gustavo Pereira's work has been incorporated into the Collection of Classics at the Biblioteca Ayacucho (BA). The new book, with a selection of the author's poetry and essays, will be presented at the Book Fair.

Venezuela's Minister of Culture, Pedro Calzadilla, explained that Filven has become Venezuela's "cultural window" to the world, with a wide variety of literary activities for children and adults. "The Bolivarian Revolution has brought about a great miracle, blossoming culture, during the past 14 years under President Hugo Chávez," he emphasized.

The Casa Andrés Bello in Caracas is one of the locations where children can participate in workshops during Filven 2013. These workshops, lasting 90 minutes each, offer readings and talks about children's books, as well as courses in creative writing.

Mariyuri Goicochea is the national coordinator of children's literature at the National Library of Venezuela. She explained that "we sow the seeds of love for literature from earliest childhood." Mariyuri Goicochea has professional experience of 18 years in the work with children, giving them impulses and facilitating reading.

Another state owned publishing house in Venezuela is Monte Ávila Editores. They are presenting 20 new titles at the 9th Book Fair in Caracas, for example the Encyclopaedia of Venezuelan Writing, compiled by researchers at the University of the Andes (ULA) in Mérida, directed by Professor Víctor Bravo.

El Perro y la Rana (The Dog and the Frog) is one more state owned Venezuelan publisher. This house with the whimsical name is showing 60 new titles this year. The Dog and the Frog published new volumes of Gustavo Pereira's poetry and essays: "La poesía es un caballo luminoso" (Poetry is a shining horse) and "Declaración de amor con tormento" (Declaration of love with torment).

The Dog and the Frog offers diverse workshops for the public at the Filven Book Fair. "How to submit manuscripts" is directed at aspiring young writers who want to publish their first book, while "Corrections: a look at the scope of editing" gives an insight into the daily work of correctors, showing how texts need to be corrected before they can be published.

The Dog and the Frog has Origami workshops for children and presents the new children's book, "Fábulas Darianas," three fables written by the famous Nicaraguan author, Rubén Darío, with illustrations by the Dog and the Frog.

This publisher concentrates on books about politics, music and sports. "Contra el olvido" is a compendium of texts about Ernesto Ché Guevara, compiled by journalist Ángel Méndez. Another book deals with the life and death of the revolutionary Venezuelan song writer and singer, Alí Primera, one of Hugo Chávez' favourite musicians. A book about Argimiro Gabaldón highlights this guerrillero's struggle against the dictatorship of the 4th Republic.

Thus, the Revolution continues in Cuba as well as in Venezuela, presented in the literary production of the Caribbean and South American region. 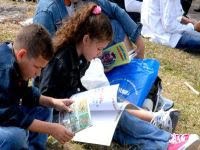