The regime of Prime Minister Binyamin Netanyahu has categorically disapproved of the statements of his Turkish counterpart, Recep Tayyip Erdogan, who likened Zionism to fascism and called it a "crime against humanity." 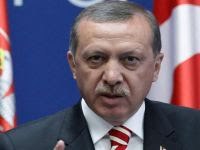 "I strongly condemn the comparison that the Turkish prime minister made between Zionism and Fascism," denounced Netanyahu on Thursday, adding: "I had thought that these comments were a defamatory dark thing of the past."

Speaking at the V Forum of the Alliance of Civilizations that opened Wednesday in the Austrian capital, Vienna, Erdogan said that "as Zionism, anti-Semitism and fascism, Islamophobia can inevitably be considered a crime against humanity."

Erdogan also said that the United Nations and the European Union (EU) are not doing enough to eradicate hate among Muslims and lack of tolerance towards other cultures.

He also condemned the growing racism in Europe as "a serious problem for the project of the Alliance of Civilizations."

Turkish premier's statements against Israel came amid the deteriorating relations between Ankara and Tel Aviv, after the first cut off of all ties with the Israeli regime due to the attack of May 31, 2010, against the Freedom Flotilla in international waters of the Mediterranean Sea, resulting in the killing of nine Turkish citizens and injuring another 50 people who were part of the team's six-ship convoy, aiming to break the maritime illegal blockade imposed by the Israeli regime in the Gaza Strip.

The Turkish government demanded that the Israeli regime make an official apology to Ankara for the incident, pay compensation to the families of the victims and end its blockade of the Gaza Strip, as preconditions for normalization of relations with the Tel Aviv regime.

Meanwhile, the Turkish daily Radikal said recently that Israeli and Turkish officials have held several secret meetings and the Tel Aviv regime could apologize for the "operational errors" during the fatal attack.

The regime of Israel, too, has expressed its readiness to comply with the second condition, that is to say, offer compensation, the report said, adding that Turkey has decided to ignore the third condition.

The recent difficulties come after six decades of a Turkish-Israeli love affair (and the hard, dedicated work of Jewish lobbies in the USA on behalf of Turkish and Israeli interests) involving covering for each others' crimes that they have in common, namely land theft, abuse of native indigenous populations and genocide against unarmed civilian populations.

While his criticism of Zionism has merit, and Netanyahu's protests ring hollow in face of the evidence, Erdogan is hardly one to be speaking about fascism, being a proponent of it himself as a NATO member that does the bidding of the fascist Evil Empire, particularly in regards to supporting the terrorist campaign against the Assad government in Syria.