Six days after Arafat Jaradat was arrested by the Israeli army and the Shin Bet (Israeli intelligence agency), he was dead. Between the day of his arrest, February 18th, and the day of his death, February 23rd, his lawyer, Kamil Sabbagh, met with Arafat only once: before a military judge, the Kishon interrogation center of the Shin Bet. 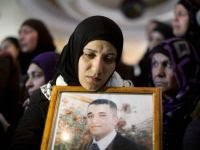 Sabbagh said that when saw Jaradt, he was terrified and had said he was in extreme pain after being beaten and forced to sit in stress positions with his hands tied behind him.

When they announced the death of Arafat, the Israeli Prison Service said the Palestinian, who leaves a widow and two children, died of cardiac arrest. However, the autopsy did not find any subsequent blood clot in his heart. In fact, the autopsy concluded that Arafat, who turned 30 years old this year, had enjoyed good cardiovascular health.

The final exam found that, in fact, the cause of death was that Arafat had been beaten with repeated blows against his chest and body, and had a total of six broken bones in the spine, arms and legs, his lips were lacerated and his face severely injured.

The class of injuries sustained by Arafat before he died at the hands of the Israeli Shin Bet is common to many Palestinians who pass through Israeli prisons. According to the Addameer organization for prisoners' rights, since 1967, a total of 72 Palestinians were killed as a result of torture and 53 due to medical negligence. Less than a month before the death of Jaradat, Ashraf Abu Dhra died while in the custody of Israel, in a case that the organization considers the direct result of medical malpractice.

The legal impunity of the Shin Bet and its torture techniques have been well established. Between 2001 and 2011, 700 Palestinians sent complaints to the State Attorney's Office, but none were criminally investigated.

Writing for the publication Adalah, in 2012, entitled "On Torture,"  Bana-Shoughry Badarne, lawyer and legal director of the Public Committee Against Torture in Israel, wrote that "the impunity of GSS [Shin Bet] is absolute."

The Supreme Court of Israel has been extravagantly useful in ensuring the imperviousness of Shin Bet  to accountability in relation to international law, thus allowing widespread and lethal torture.

In August 2012, the Israeli Supreme Court rejected the petition submitted by the Israeli human rights organization, Adalah, the Association for Civil Rights in Israel to demand that the Israeli Attorney, Yehuda Weinstein, conduct criminal investigations of every allegation of torture by the Shin Bet.

In the first week of February, two weeks before the death of Arafat, the Supreme Court threw out a petition by Adalah demanding video and audio recordings of all Shin Bet interrogations, to meet requirements of the UN Convention against Torture (UNCAT, in English), to which Israel is a signatory.

In May 2009, the UNCAT condemned Israel for not performing the requirement of recording interrogations conducted by the Shin Bet, and stressed that such monitoring is essential as a preventive measure to inhibit torture.

However, in 2012, the Knesset (Israeli parliament) extended the Shin Bet exemption from the requirement to record interrogations for three more years.

Rationalizing about the failure to meet this requirement as basic, recording interrogations, the State maintains that the claim is for the protection of "national security" interests that interrogation techniques that are not made public.

Arafat was killed under torture. Torture is routine. But the following is not routine, from the announcement of the death of Arafat, thousands of Palestinians have joined in solidarity with the arduous struggle of Palestinian prisoners on hunger strike, responding with force.

At least 3,000 prisoners refused to feed themselves; thousands took to the streets of Gaza and vigorous demonstrations took place throughout the West Bank. While the State of Israel continues to launch its arsenal of lethal weapons to repress the Palestinians, the banality of evil this regime is and will always be eclipsed by the powerful will of the Palestinians for self-determination.