Fidel Castro is the greatest politician of our time, a man whose authority has remained undoubted for over half a century. In his 86, he continues to be a high ranking Cuban leader, and despite all the talk about his imminent death, he lives an active life, makes public appearances and writes books, remaining the "politician number one" in his country. 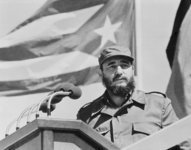 The Comandante voted in the elections to the Cuban parliament, appearing in public for the first time over the last few months. Cuban state television showed the 86-year-old leader, who left state service long time ago, attending a polling station. The crowd surrounded his car and greeted Fidel with cheers. He spent nearly an hour talking to other voters and journalists about the economic reform and integration in Latin America, as well as Hugo Chavez, President of Venezuela. Fidel thanked everyone for their participation in the parliamentary elections. During the three previous elections Castro voted at home.

Castro has not appeared in public since October of last year, when he met with the Foreign Minister of Venezuela. Before that, in March, he met with the Pope. The elections to the National Assembly is largely a formality, as the opposition parties are not allowed to participate, and all candidates are selected by the ruling Communist Party. The Parliament has over 600 members, and formally appoints candidates for top positions in the state. Fidel Castro in 2006 passed the country to his younger brother Raul who turned 81 years old. The Cubans are wondering who will replace the Castro family. The appointments of ministers and vice presidents may indicate who is being prepared for the presidency by the Communist Party of Cuba.

After Fidel Castro retired, he constantly had to deny rumors about his deteriorating health and even death. Fidel's beard turned gray, he stoops and speaks softly and barely audible, but this is quite normal for a person of 86 years old. He maintains good spirits, clarity of mind and thought. He publishes books and writes articles. In one of them he sharply criticized the speculation about his impending death.

The leader of Cuban revolutionary called the speculations published in the international media "lies," and backed his words with a photograph in which he is dressed in a plaid shirt and a cowboy hat. According to Castro, he is not concerned with his health, and does not even remember when he had a headache. "Most of the information sources that publish this nonsense are those for the privileged and rich, and the ordinary people believe them increasingly less," Castro wrote. He also added that he continued to write, but decided to move away from public life, because taking up pages in newspapers was not his primary goal.

There are no other politicians of Fidel Castro's scale in the world. Most people in all countries of the world know his name. His political activism always evoked admiration both among his teammates and opponents. Fidel had millions of friends, but also millions of enemies. The main enemies of the Cuban revolutionary lived on the territory of the country deeply hated by Castro - the United States of America. In August of last year Fidel Castro celebrated his 86th birthday. He has long departed from political affairs, handing over power to his brother Raul. The Cubans are accustomed to seeing their beloved leader who still greets them during national holidays.

In his youth, when Fidel gained immense popularity after the revolution and became a hero of Cuba, almost every day he met with the people. He knew how to operate a hammer, helped farmers to harvest corn, moved diesel compressors with workers, would sit in a boxing championship next to ordinary fans, and sometimes would go to a store to get some bread. Fidel was everywhere. Castro was considered and continues to be considered a family member for nearly every Cuban family. Fidel's incredible popularity is linked with his magnificent oratory skills. He could talk for hours, while holding the crowd in constant attention. The people listened to him enthusiastically. Even when Fidel turned 70 his oratorical skills remained outstanding. He continued to speak from the podium like he did thirty years ago. The entire world applauded his speeches because they touched every listener.

Fidel Castro has done a lot for his country and his people. These achievements are recognized even by foreign media that cannot boast of affection for the leader of the Cuban Revolution. According to the 1953 census, 23.6 percent of the population over the age of ten was illiterate. Now even Western historians talk about achievements of Cuba in the social field. The Cubans are proud of the social gains they received through the communist revolution - the right to work, free education, medical care, etc. Socialist Cuba is the first among Latin American countries in the field of education, development of sports and culture. The level of Cuban healthcare is much higher than that in some countries in Western Europe. In terms of life expectancy (76) Cuba is second only to Japan.

Through new technological opportunities and the experience of Cuba led by Fidel Castro, the social sector raised to a level no one could have dreamed of before. Cuba is the first Latin American country that eradicated illiteracy, protected the health of workers, made sports accessible to every Cuban, and began addressing the issue of raising the living standards of the population. There has been no increase in poverty level in Cuban society, and inequality has not deepened since a tax system was introduced for the employees of the private sector along with other regulatory measures.

Education and health care are free at all levels, over 1.4 million pensioners receive monthly pensions without delay, minimum wage is guaranteed. There are very few beggars in Cuba. Cuba demonstrates that globalization is not a necessity. Despite some difficulties in the life of the Cubans (primarily due to the anti-Cuban policy of the U.S.), Cuba in many ways is ahead of the countries that once betrayed socialism by transferring to capitalism.

Cuba's HDI (Human Development Index) is ranked 51st in the world. The United Nations placed it in the ranks of countries with relatively high human development. Over 80 percent of the production industry of Cuba is not in the hands of the "efficient owners", but the government. Foreign capital has less than 10 percent, and even then the property is registered as a joint venture with the government.

Multinational corporations that operate in Cuba have to work within fairly strict limits. They cannot purchase land or pay Cuban workers directly, but only through the government agencies. Unlike, for example, in North Korea, Cubans can freely communicate with foreign relatives and have Internet access. This development has been achieved thanks to the will of Fidel Castro, his determination and real compromise with the people. The social model designed by Fidel and the Cuban people has proven its viability.