The usual suspects have embarked on another mass butchery - sorry "training exercise" - in mega-resource-rich Mali, and are meddling, with lethality, in Algeria. The UK, ever keen to kill, has gone from the Prime Minister's "no boots on the ground" assurances, to "Operation Creep" in barely over a week. 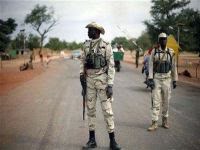 The US, says a spokesman, assesses that "intervention" may "last for years." He was talking Mali. Think Africa.

The disaster of a recent African foray, the ruins of Libya, lives lost ranging from 30,000  to 100,000, the horror of the plight of the country's Leader, his children, grandchildren, the murder of the US Ambassador, torching of his Benghazi residence and deaths of three US government employees, are seemingly forgotten. No "lessons learned." The British Embassy in Tripoli has received "credible threats" with the Foreign Office advising against travel to the country, with Westerners facing a "high threat from terrorism."

Yesterday's gift of "democracy" to Afghanistan - where US soldiers are being killed with relentless regularity by their Afghan "colleagues" who, of course, they have "trained" - has brought poverty and desperation such that the BBC - usually loyal to a fault to any colonial invasion - is reporting that some families resort to selling one child in order to gain enough money to feed the others.

In the horror of the country's prisons, the UN reports this month that torture is on the rise and, as in Iraq, the unspeakable continues.

In Iraq, the occupation's abuses continue to haunt the invaders and the Iraqis. Today, the tireless Phil Shiner, of the UK's Public Interest Lawyers, presents another case on behalf of one hundred and eighty Iraqis, in Britain's High Court, alleging that they were systematically abused and tortured by British troops using methods chillingly reminiscent of the Americans at Abu Ghraib and elsewhere.

The claim is of a "systematic" policy between 2003 and 2008 of lawless torture and killing.

As the tenth anniversary of the Iraq invasion approaches, it is surely time for the invading countries to attempt to amend for the enormity of the illegality of the invasion and for individual sufferings. Details of the alleged abuses by Britain's  "heroes" define depravity, bestiality, sadism and sub-humanity's worst.

Just a few of those who suffered have their days in court. Others have made pleas that should also shame.

Former Iraqi Deputy Prime Minister, Tareq Aziz, has again appealed to the Pope. He has been incarcerated under sentence of death since 2003.  His audience with the Pope, in 2003, was a plea to avert an attack on Iraq, which had suffered so grievously under the embargo. His people had died in the hundreds of thousands from its effects,

In 2003, he appealed for Iraqis to live, to the Pope at the Vatican and in other European capitals. Last week, he appealed to Pope Benedict the sixth that he should be allowed to die. His lawyer, Badie Izzat, has said his client is deeply depressed and is sending an appeal to the Pope to intervene for the end of his suffering.

"Aziz told me that the former spokesman of the government, Ali al-Dabbagh, visited him months ago, accompanied by two of the judges and promised to study his case, but he did not receive any response from him."  Aziz stated, "I prefer to be executed than to remain in this situation." Two other former government officials, Saadoun Shaker and Abed Hammoud, are also facing this most shocking of barbaric "victors' justice."

Tareq Aziz now suffers a range of serious health problems and seemingly has finally given up, also calling on "all international organizations to intervene to put an end to his current status," states Izzat.

Last year, Iraq's American imposed "Prime Minister" pushed for the death sentence against Aziz to be speeded up, in spite of the fact that Iraqi law negated the death penalty on those over seventy. Tareq Aziz is seventy-four. His family has urged human rights organizations and relevant bodies, as well as politicians, to release him due to his frail state and lack of medical care.

President Talabani said that he would never sign the order for Tareq Aziz's execution, but he was rushed to Germany after a heart attack and an ominous silence as to his condition has followed.  Tareq Aziz could have fled Iraq ahead of the bombs and tanks, but was true to his words to me in an interview that "I will never give up on Iraq." His health has failed him, but whatever the complexities, he did not give up on the country he served and loved.

It is impossible not to ponder whether the core of Western proclaimed values are not hypocritical cant. Those - and there are many of them, distinguished and compassionate, who have written to the Pope, to Archbishops, politicians, all who profess a faith, those who learned the Ten Commandments barely out of nursery school, "Thou shalt not kill," those who recite the Lord's prayer on Sundays, and at their festivals, "Forgive us our trespasses, as we forgive those who trespass against us." What rubbish. They simply annihilate, or condone annihilating, those who pose no threat whatsoever.

Year after year, they ignore pleas for justice, pleas for human lives, pleas in line with their hollow, meaningless, hypocritical prayers.

"The quality of mercy is not strain'd, It droppeth as the gentle rain from heaven, Upon the place beneath.  It is twice blest; It blesseth him that gives and him that takes," wrote Shakespeare in the Merchant of Venice. Another fantasy that children of the West are indoctrinated with, values of  total delusion.

Of the torture cases before the High Court commencing today, law Professor, Andrew Williams, of Warwick University says "This is our last chance to get to the truth of what happened.  This is what we demand of others, but we do not demand it of ourselves. What kind of message does that give the world about who we are?"

Indeed. our governments have become the regimes they warned us about: ones that illegally invade, rape, torture and incarcerate without oversight or review, without either a trial or via a proxy kangaroo court.

Last September, Archbishop Desmond Tutu called for George W. Bush and Tony Blair to be brought to The International Criminal Court at The Hague on war crimes charges.   He said they had "fabricated the grounds to behave like playground bullies ... They have driven us to the edge of a precipice where we now stand - with the spectre of Syria and Iran before us."

In the interim, perhaps, those two professed Christians could do something, well, Christian, and pressure Nuri al Maliki to release their fellow Christian, Tareq Aziz, his colleagues and the mass of illegally held incarcerated Iraqis.

-
Prepared for publication by: