Every good housewife cleans and airs the home in late winter or spring, to let good energies in. Similarly, the Syrian Armed Forces are cleaning the homeland of evil spirits, in the form of foreign-paid terrorists. The cleaning involved Syria's major areas, according to reports by the SANA news media, on the 27th and 28th of January 2013. 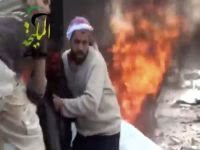 Syrian authorities arrested terrorists who tried to steal cars and other properties of citizens in the Aleppo neighbourhoods al-Jalari and al-Sabeel. Stolen weapons and ammunition were seized. In the Aleppo countryside, the Syrian Forces eliminated scores of terrorists in al-Atareb, al-Zahabyeh, Ein Daqna, Khan Toman, Ming and Querin. Their hideouts were destroyed.

In Daraya city, the Syrian Armed Forces killed terrorists in three cars, destroying their weapons and ammo, too. Two of the men were identified as Ammar Quazzah and Mohammad al-Sheikh. Two more terrorist cars with machineguns and terrorists inside were annihilated near the railway of Daraya city.

Several terrorists were also liquidated near the worship places in the area of al-Sayyda Zeinab, in the farms of Drousha and Khan al-Sheeh. In the Douma and Harasta farms, dens of terrorists were destroyed. The killed men are Mohammad Darwish, Mohammad Mayaseh, Mowaffaq al-Rifai and Salem Kanaan.

In the area of Karnaz, a terrorist group was liquidated near the checkpoint. Among the dead are Mohammad Ahmad al-Asmar, Dia'a Yaseen Hindami, Murhaf al-Nasser and Zahr Eddin Abdo al-Syyadi, the leader of the so-called "al-Farouq battalion."

Terrorists were liquidated at the Abu Dhour Airport and in the village of Heish. Their vehicles were destroyed. Among the dead are Abu al-Dahour, Em Jireen and Jisr al-Shughour.

Meanwhile, citizens of Aqraba, Damascus countryside, were able to return to their homes, after the security forces had cleaned out the area thoroughly. They found grenades, pump-action bullets, sniper rifles and large quantities of stolen medicines.

Pupils returned to their schools for the second term of the school year. In spite of hindrances, the attendance rate of teachers and administrative staff is 98 percent, of pupils 74 percent. The pupils showed great determination to continue their education as one of the best ways to serve the homeland.

In Tartous, the Youth Union organized an artistic event, called "Victory of Syria." Sixty-five young people participated in music and painting workshops. Hazem Moalla, Secretary of the Youth Union, said that this event was set up to develop the talents of youth. One of the participants, Samer Chaham, from Aleppo, affirmed that he felt a lot of solidarity among all the youngsters taking part to help Syria overcome the foreign paid terror.

Syrian universities and research centres are being upgraded, the Prime Minister, Dr. Wael al-Halqi, reported. At a meeting with the Higher Commission for Scientific Research, he stressed the importance of increasing attention to scientific research in various sectors. The commission's fiscal and administrative report was also discussed.

The Syrian state offers free health services to all of its citizens, the Minister of Health, Sa'ad al-Nayef, confirmed. Syria relies on its own capabilities and on friends around the world to meet the healthcare needs of Syrian citizens. In contrast to what the western mainstream media publish, Syrian hospitals and health centres continue to perform their duties in treating all patients.

The Minister of Health asked friends and expatriates in the worldwide diaspora to support the rehabilitation of vandalized or stolen material in Syrian hospitals. Especially electric power generators and tanks to conserve drinking water are needed.

The Syrian Ministry of Tourism is establishing a new national company to manage all Syrian hotels. The Minister of Tourism, Hala al-Nasser, explained that her Ministry will install national management to replace all formerly foreign-managed tourist facilities.

At a meeting with Syrian trade unions, the Minister reported that she had already received several offers from national investors and hoped for support of the unions, stressing the need of cooperation between the Ministry and the unions.

The Syrian Ministry of Agriculture published the good news that wheat cultivation has increased to reach 1.144.565 planted hectares. The Director of Plant Production at the Ministry, Abdul Muain Kadamani, pointed out that due to the rains, the implementation of the agricultural plan amounted to 100 percent in most areas of Syria. In Tartous, 95 percent were reached, in Raqaa 88 percent and in Hasaka 72 percent.

Regarding barley cultivation, the total planted area now amounts to 1.127.216 hectares. Implementation of the barley growing plan was 100 percent in Aleppo, 97 percent in Hama, 96 percent in Homs, 92 percent in Tartous and 81 percent in Raqaa.

The Syrian national chess team came home with five medals from the Mediterranean Championships in neighbouring Lebanon: two gold, two silver medals and one bronze medal. The gold medals were won by Bashir Aiti and Juan Bakr, the silver medals by Bashir Aiti and Rita Yaghi, while the bronze medal went to Fatima al-Jaldeh. Participants came from Greece, Lebanon, the Libyan Jamahiriya, Malta, Tunisia and Syria.

Last, but not least, the national archaeological mission made some new discoveries, showing once more that Syria is a very old territory of culture, a "cradle of civilization." Near Naher al-Bared, archaeologists found a small bronze statue of the Greek god, Amor, and a cylinder from Assyrian times. Abdul Kader Farzat, director of the mission, further announced that they had also excavated the remains of two buildings in Section A of the hill. The first edifice stems from the Byzantine period, the second goes back to Roman times. In these ruins, an old Roman mosaic was found as well.

Hopefully, peace will be restored soon, so that tourists from all over the world can flock to Syria again, to admire all of its marvels, old and new.