'It is the first genocide of the 21st century. Poor Iraq and Iraqis. The silence of the world pushes me to lose faith in humanity." (anonymous)

Incredibly it is twenty-two years to the day since the telephone rang in the early hours and a friend said, "They are bombing Baghdad." 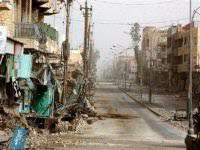 It was not only Baghdad, of course. Iraq was being systematically destroyed, from ancient southern Basra to haunting, historic Mosul in the north.  In the West, destruction was such that it was not even noticed by the outside world that about seventy miles of Iraq had been entirely illegally donated to Jordan, the border was simply "moved." Kuwait, bordering on Iraq's southern border, illegally benefited similarly.

Then Secretary of State, James Baker's, vow to "reduce Iraq to a pre-industrial age" was being minutely executed over what was to become a forty-three day blitz, which morphed in to a thirteen year vicious, murderous, one sided war of attrition and ultimately illegal invasion and occupation.

Moreover, Eric Hoskins, a Canadian doctor and coordinator of a Harvard study team on Iraq, reported that the allied bombardment, "... effectively terminated everything vital to human survival in Iraq - electricity, water, sewage systems, agriculture, industry and health care. Food warehouses, hospitals and markets were bombed ..." Hoskins' team asked themselves, "if these children are not the most suffering child population on earth."
A UN team called the devastation "near-apocalyptic."

Invasions are, of course, a tragedy - unless it is the US-EU-NATO's slaughterfest, then it becomes "the Right to Protect, humanitarian intervention and of course, liberation." Iraq's actions towards Kuwait were complex and Saddam Hussein was led to believe his action was US - thus Western - sanctioned. Iraq was, in fact, subject of an epic proportioned, historic, stitch up.

Academic, Dr Gideon Polya, author of: "Body Count - Global Avoidable Mortality since 1950," calls Iraq's subsequent plight a "Holocaust" and a "Genocide." He is less than impressed by "liberations," stating in the Preamble that his research, " ... documents the ... avoidable death of 1.3 billion people since 1950 on Spaceship Earth, with the First World in control of the flight deck." That was up until 2007.

Dr Polya has now researched attacks on Muslim countries.  Given today's anniversary, this is "stolen" wholesale from his Iraq website "dedicated to informing" of the enormity of what has befallen the people of Mesapotamia (note, figures so far, to 2011).

Dr Polya, who has filed a formal complaint with the International Criminal Court, states: "The Iraqi Genocide - still continuing under Nobel Peace Laureate Obama - is of a similar magnitude to the WW2 Jewish holocaust (5-6 million killed, 1 in 6 dying from deprivation.) "

On this anniversary of a night of terror and tears, which set the stage, the war "theatre" or threat of it - with Muslim countries the target - this is dedicated to the people of Iraq - and their neighbours in Syria, Iran, and to the decimated of Afghanistan, Libya and the people of Palestine. To all those victims of "Spaceship Earth with the First World in control of the flight deck."