"The people who lived here were killed by democracy." Writing on the wall of a house in Haditha, Iraq, after the massacre of twenty-four people by US Marines, November 2005 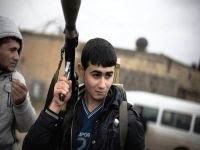 Having reduced Iraq to a state of terror, shambles, years of near pogrom, and, as the tenth anniversary of possibly modern history's most illegal invasion, with car bombs and resultant body parts still a near routine nightmare, it seems the democracy bringing US-EU-NATO axis is about to score another goal in Syria.

Their pet insurgents - in the nation where the capital city, Damascus, is believed the longest continuay inhabited city on earth, is mentioned sixty-seven times in the Bible and where the language of Jesus, Aramaic, is still spoken in some areas - are torturing, killing, beheading and destroying history itself.  It seems the Western liberty bringers now, with their alleged factory plundering palTurkey are party to establishing their very own Mukharbarat (secret police).

This secret security force in Middle East countries is a name usually spoken in whispers with a furtive glance over the shoulder, by people of fortitude for whom fear is mostly a foreign language.

It is now reported  that the murderous "mutineers" (pictured being paid in US $s) have set up their very own Mukharbarat to: "protect the revolution" and to gather information to plan attacks on forces of a sovereign government.

Underlining further the chaotic, blind folly (as Iraq, Libya) of their Western backers, the Report states of the Mukharbarat backers: "The organization appears to operate independently from the main opposition Syrian National Coalition and the Free Syrian Army, effectively answering to itself."

The Arab world's secret services are undisputedly a biword for ruthlessness (however, given Abu Ghraib, Bagram, Guantanamo, rendition flights, secret trials, torture, waterboarding etc., there is no high moral ground).  But in the words of "Haji," one self styled rebel might yet make the Arab world's worst excesses look mild, as the US and UK did Saddam's:

"We are watching everybody. We have gathered information about every violation that happened in the revolt," he said.

"Those we cannot punish now will be punished after toppling Assad. Nothing will be ignored. We have our members among all the working brigades. They are not known to be intelligence and they operate quietly."  His agents, Haji said, worked undercover as activists, citizen journalists or fighters. "Nothing will be ignored" he warned darkly.