NATO refuses to have anything to do with Mali conflict

No sooner had the head of the African Union, President Boni Yayi of Benin, asked NATO to help the state of Mali, when France intervened in the conflict. The alliance has preferred to stay away. The situation in Mali remains difficult. According to most recent information, Islamist militants seized another town - Diabali. French officials assure that they do everything possible. 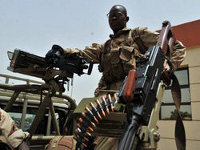 Experts said the unrest in the country began in March 2012, after rebels seized the presidential palace, military barracks and state television building in the capital. Rebels were soldiers, who were dissatisfied by the current government of the country, as well as its method of governance. After the coup, the National Committee was established, which, according to rebels, is supposed to restore democracy in the country. Captain Amadou Sanogo was elected the chairman of the organization; the overthrowing of the President of Mali, Amadou Toumani Toure, was announced afterwards.

Experts assert that the uprising in Mali is based on the unrest in Libya. The group of Malian Tuareg separatists, using the unrest in Libya, took hold of plenty of weapons, which helped them capture the northern part of the country and create an autonomous state - Azavad. The Malian army could not resist well-armed separatists, which led to the rebellion of a group of military men, dissatisfied with the policy of the president.

In April 2012, the Economic Community of West African States ceased to provide economic assistance to Mali. The community also demanded the power in the country be handed over to civilian representatives. Afterwards, there was an interim governor appointed - a representative of the Parliament, Dionkunda Traore. However, after the coup, representatives of the national movement of Tuareg separatists started being more active and seized the historic capital of Timbuktu. After that, militants announced that they were going to stop combat actions, as they had achieved all their goals. As the result, on April 6, 2012, Azavad, a region in north-eastern Mali, was declared an independent state.

After these events, the former president of Mali stepped down. However, the new governor, the former speaker of the parliament Dionkunda Traore, who was, according to Malian citizens, appointed for the position of the president only under international pressure, should be removed from office and replaced with military leader - Amadou Sanogo.

Earlier this year, representatives of the armed forces announced that Mali was launching the operation to suppress terrorists and release the occupied territories in the north. Both sides conduct massive attacks against each other, but no tangible results have been achieved. As defense minister noted, Mali troops took up positions firmly and did not intend to back down.

For the time being, most of the troops are stationed in the region of Mopti, where quite a big airport is located. The airport, government officials claim, is the main target for extremists. The other day, extremists tried to seize the municipality of Mopti, but the Malian army could hold the position. Experts note that this is the place of the notional boundary between the territories seized by the Islamists, and the areas held by the official government.

In December of 2012, the UN Security Council declared the need to deploy more than 3,000 African soldiers in Mali, who were to take part in peacekeeping operations. However, the heads of the Economic Community of West Africa  said that even the participation of African soldiers would not help achieve any desired results, until NATO and the U.S. stepped into the game.

According to the President of Benin, NATO should have some weight in Mali. The president released the statement at a news conference in Ottawa with Canadian Prime Minister Stephen Harper. In addition, in his speech, the President of the African Union said that the African community considered that the terrorists were the invaders. According to him, terrorism is a problem of the entire world, so NATO could not stay away from the events in Mali.

However, representatives of the North Atlantic Alliance were quite skeptical about the request from Benin's President Boni Yayi. As noted by the press service of the alliance, NATO was currently not a party to the African conflict and was not going to interfere. There are no requests or discussions about NATO's possible intervention in the conflict.

In addition, a few days earlier, the Prime Minister of Canada said that Canadian troops would not be involved in the operation to resolve the conflict in Mali. According to Stephen Harper, the situation in the African country concerns the Canadian government, but Canada would only be willing to be a supplier of humanitarian aid to Mali.