2013 marks ten years since the beginning of U.S. and Britain's military operations in Iraq that ended with the fall of Hussein's regime. The victory of the allies over the poorly armed Iraqi army was not a surprise to most observers. However, the retention of the foreign military presence in the country would inevitably lead to an increase of popular resistance. 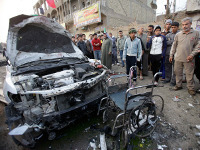 Ten years after the start of the American invasion, The Independent columnist John Kampfner called the war in Iraq one of the greatest foreign policy debacles in contemporary history. Today, few believe that the overthrow of Saddam Hussein by a foreign intervention that caused chaos and death of civilians was justified. We should analyze the mistakes of Bush and Blair to develop decision-making mechanisms regarding external intervention in emergency situations caused by human rights violations.

No one in the United States is interested in starting new wars after the events in Iraq and Afghanistan. According to a recent poll conducted by Washington Post-ABC News, the American public does not want the use of force for political purposes. However, if Assad uses chemical weapons against his own people, the opinion of the Americans may change. At the same time, the UK will not be able to fully participate in the operation due to the reduction of the military budget, and is likely to be limited to the support of the Air Force, if necessary.

The U.S. maintains military superiority, but President Obama knows that, at least for now, any military action would involve the risks that would outweigh the frustrations caused by inaction, Kempfner continued. The events in Iraq have caused a reaction in the Middle East and could be repeated in Syria. On May 1, 2003, the U.S. officially announced the completion of military operations in Iraq and victory of the coalition forces.

U.S. President George W. Bush delivered a speech aboard the aircraft carrier "Abraham Lincoln," where he announced the victory of the allied forces over the tyranny of Saddam Hussein. In the coming years the military were going to continue the search for unconventional weapons and begin rebuilding the destroyed infrastructure. One way or the other, the coalition forces remained in Iraq indefinitely. In May of 2003, after the completion of the brilliant "Operation Iraqi Freedom," it was difficult to imagine that the U.S. military would stay in the country for many years.

In addition, by early 2008, the American contingent was increased to 160 thousand people. At the same time, the losses of the coalition forces have significantly increased. In one year, 952 U.S. military personnel were killed, and over six thousand were injured. At the time it seemed that the Iraq war would never end. However, following the election of U.S. President Barack Obama, a phased reduction of the military presence in Iraq has begun. By August of 2010, all U.S. combat troops have left the country, while the number of military employees still amounted to 50 thousand people.

Finally, on December 15 of 2011, the completion of the U.S. Army mission in Iraq that lasted nearly nine years was announced. The U.S. military disclosed the irretrievable losses of the American army that amounted to 4,487 people. If the number of casualties in the ranks of the coalition forces is well documented, the number of casualties among civilian and insurgents is difficult to calculate due to the lack of reliable official sources. All calculations and computations in this regard caused heated debates. According to several sources, by July 2010, the number of civilian deaths ranged between 97, 461 and 106, 348 people.

In 2006, Nuri al-Maliki, nominated for the post of prime minister by the "United Iraqi Alliance" (UIA), became head of the Iraqi government. Parliamentary elections held in March of 2010 secured the second place for Maliki's coalition, which allowed him to stay as prime minister. After the war was over, the Shiite al-Maliki government began conducting an independent foreign policy without consulting with the U.S. and its allies. Very soon, Baghdad was outside of Washington's sphere of influence.

Iraq had a strong reaction to Ankara's unilateral actions in northern Iraq, demanding an end to cross-border operations against the PKK. In addition, in September of 2012, Iraq proposed its own plan to settle the Syrian conflict and opposed any military options. The Iraqi government is doing everything possible to recover the status of a regional power lost after the fall of the old regime. In the coming years, the role of Baghdad in regional affairs will only increase, experts believe.