India: wave of protests against the country take on rapists

She died young in India, raped because of a gang... The young woman whose gang rape triggered protests and a national debate on violence against women in India, died on Saturday (29th), causing action to ensure security in the capital, New Delhi, and confirmation by the Indian Prime Minister, that social change is needed. 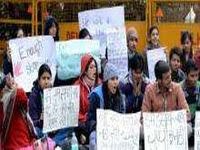 Preparing for a new wave of protests, the Indian authorities have mobilized thousands of police, closed 10 subway stations and are prohibiting cars from some main roads circulating in central New Delhi where protesters have converged since the attack to demand guarantees of women's rights and punishment of rapists. Hundreds of people held peaceful protests on Saturday morning (29th).

The 23 year old medical student was beaten, raped and thrown out of a moving bus in New Delhi on December 16th, and was taken to a hospital in Singapore in critical condition.

The intense media coverage of the attack and the use of social media to galvanize protests, especially by young middle-class students, forced political leaders to confront some uncomfortable truths about the treatment of women in India.

Most sex crimes are not reported in India, many offenders go unpunished, and the wheels of justice turn slowly, according to social activists who say successive governments have done little to ensure the safety of women. The girl's body is to be flown back to India later on Saturday.

Another similar case reveals police complicity with violence against women. An Indian girl of 17 years, another victim of gang rape, committed suicide after police pressured her to drop the case and marry one of her assailants. The attack occurred during the festival of Diwali, on November 13th, in the region of Patiala in Punjab. One officer was fired and another suspended. The teenager was found dead late on Wednesday (26th) after ingesting poison.

The inspector general, Paramjit Singh Gill, said the teenager "was going from one person to the other for her case to be registered," but the police did not open a formal investigation. "One of the officers tried to persuade her to withdraw the complaint," said Gill. The victim's sister told the Indian television network "NDTV" that it was proposed the adolescent accept a cash payment or agreement to marry one of her attackers.

The People's Trust of India also reported that a policeman was suspended for allegedly refusing to register a complaint of rape in the state of Chhattisgar (north). The victim's sister took the case to the highest-ranking official site and started a search for her attacker, a rickshaw driver.

Epidemic of attacks on women

The Indian authorities and the police are accused by demonstrators of not taking seriously the allegations of rapes and sexual assaults in the country, where over 90% of violent crimes recorded in 2011 had one or more victims as women. Official figures show an epidemic of attacks on young women. Of the 256,329 violent crimes in India in the past year, 228,650 were against women, say official statistics.

The actual number, however, can be much higher, since many women are reluctant to report attacks to the police.